VANCOUVER — A British Columbia Supreme Court judge reserved his decision Wednesday on whether bail restrictions will be loosened for Chinese tech executive Meng Wanzhou as she fights extradition to the United States.
Jan 13, 2021 9:49 PM By: Canadian Press 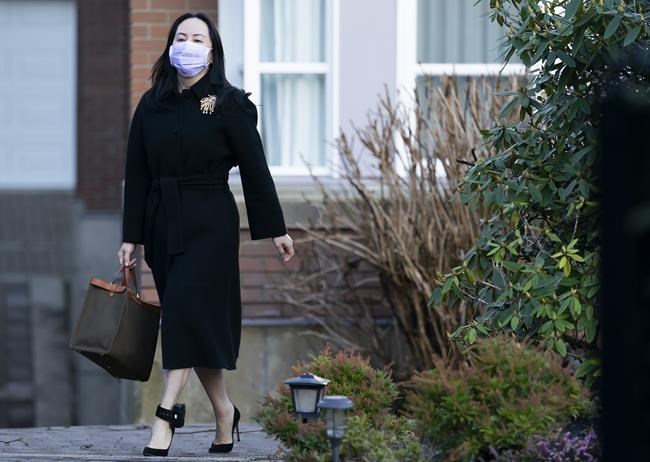 VANCOUVER — A British Columbia Supreme Court judge reserved his decision Wednesday on whether bail restrictions will be loosened for Chinese tech executive Meng Wanzhou as she fights extradition to the United States.

Justice William Ehrcke, who first granted Meng bail after her arrest at Vancouver's airport in December 2018, is set to deliver his ruling on Jan. 29.

Meng's lawyers have asked the court to approve changes to her bail agreement that would allow her to leave her Vancouver home outside the hours of her overnight curfew without the presence of private security staff.

Her husband Liu Xiaozong is visiting Vancouver and testified Tuesday that Meng has underlying health conditions. He said he believes her proximity to security staff puts her at greater risk of contracting COVID-19.

Doug Maynard, the president of Lions Gate Risk Management, told the court his staff use the strictest health protocols while working with Meng.

The chief financial officer for Huawei is wanted in the United States on fraud charges based on allegations that both she and the company deny.

Maynard testified Wednesday that he believes the risks assessed when Meng was first granted bail persist, including the potential for harm to Meng, her "extraction" from Canada and that she might try to flee.

Maynard also told the court the ankle bracelet Meng wears to track her whereabouts can be "defeated" and it has failed on numerous occasions.

Both technology and security staff are required to monitor Meng, he said.

"Without the human element there you're down to a single layer, which is just the bracelet, and that can either be removed quite quickly or interfered with."

Maynard agreed under cross-examination that security staff have not had to intervene to physically protect Meng while she's been living on bail.

William Smart, a lawyer for Meng, suggested that Lions Gate would lose about $170,000 a month if they're no longer required to accompany Meng outside.

"I'm not impugning your integrity, but Lions Gate has a financial interest in maintaining the present bail conditions, don’t they?"

"It would be a loss of revenue," said Maynard, agreeing with the approximate amount while noting it would represent revenue before the costs of doing business and the monthly loss would not be as high as $170,000.

John Gibb-Carsley, a lawyer for Canada's Attorney General, argued Meng remains a flight risk with substantial resources at her disposal.

But another lawyer for Meng, Mona Duckett, quoted an affidavit from her client that said she would never do anything that would damage Huawei's reputation.

"I believe that breaching my bail conditions would cause such damage," Meng said in the document.

Duckett told the court Meng has shown over the duration of her bail agreement that the judge's trust in her was well placed.

She said it's not a realistic risk "to suggest that (Meng) would intentionally make herself a fugitive by fleeing instead of continuing to vigorously fight this extradition."

After checking with Filer's corporate counsel on Wednesday, Duckett told the court she learned Filer was not prepared to continue acting as surety in the event the court grants their request to change Meng's bail conditions.

Meng's lawyers are fighting her extradition with several arguments claiming she was subjected to an abuse of process and she should be freed.

They allege Meng's arrest was unlawful, that U.S. authorities misled Canadian officials in their summary of the case, that Meng was used as a political pawn by U.S. President Donald Trump and that the United States is trying to assert jurisdiction where it doesn't exist under international law.

This report by The Canadian Press was first published Jan. 13, 2021.

Poll finds strong support for COVID-19 curfews despite doubts about effectiveness
Jan 19, 2021 8:35 AM