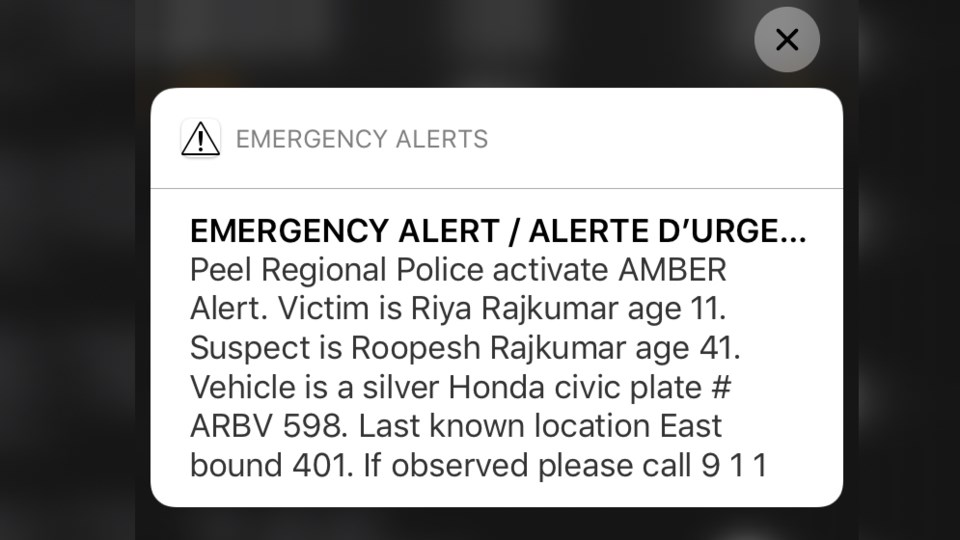 Despite the tragic end to an Amber Alert sent out in Ontario Thursday night about a missing 11-year-old girl, some people were more angry about the disturbance the alert caused to their sleep.

Peel police said their communications bureau received a number of calls to 9-1-1 from people complaining about the late hour the alert was sent to mobile phones.

The first alert was sent just after 11:30 p.m. Thursday about the disappearance of Riya Rajkuma, who was believed to have been abducted by her father. The body of the little girl was later found at a home in Brampton and her father was arrested a short time later by provincial police in Orillia.

Peel police won’t release exact numbers of how many people phoned to complain but said that since 6:30 a.m. Friday there have been well over 30 calls. Some of those calls are complaints about being woken up while others are upset the emergency alert was able to bypass the do not disturb setting on their phone and some are angry that they have not stopped receiving the alert to their phone.

Police said that from the time of the alert on Thursday night until 9 a.m. on Friday, 383 calls were made to 9-1-1, with a large influx of 124 calls within the first hour of the alert.

However, police were quick to point out that it was thanks to someone receiving the Amber Alert that officers were able to find the suspect and his vehicle.

“I can’t even begin to describe how disappointing and upsetting it is to read the comments, emails and calls to our communications bureau complaining about receiving an Amber Alert late at night,” Const. Cst. Akhil Mooken tweeted Friday morning.

“I appreciate that a lot of people were sleeping but the immediate need to locate the child outweighed the momentary inconvenience that some people encountered. Tragically this incident did not have the outcome we were all hoping for but the suspect was located as a direct result of a citizen receiving the alert and calling 9-1-1. The system works. ”

Police also gave their thanks to everyone who called in with tips.

Alstom reaches preliminary deal to buy Bombardier train unit, report says
Feb 16, 2020 4:22 PM
Comments
We welcome your feedback and encourage you to share your thoughts on this story. We ask that you be respectful of others and their points of view, refrain from personal attacks and stay on topic. To learn about our commenting policies and how we moderate, please read our Community Guidelines.