OTTAWA — Prime Minister Justin Trudeau and his ministers are meeting for a second day to plot the country's path through — and eventually beyond — the COVID-19 pandemic amid uncertainty around whether it is already in the midst of a dreaded second wa
Sep 15, 2020 10:47 AM By: Canadian Press 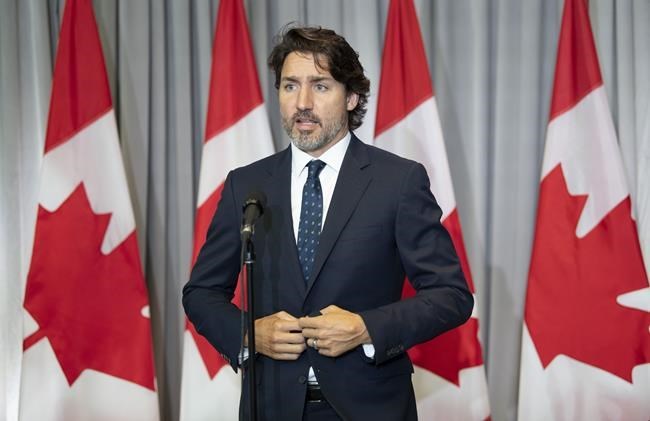 OTTAWA — Prime Minister Justin Trudeau and his ministers are meeting for a second day to plot the country's path through — and eventually beyond — the COVID-19 pandemic amid uncertainty around whether it is already in the midst of a dreaded second wave.

A rising number of new infections in recent weeks have all but hijacked the Liberal government's talk of setting a bold new post-pandemic course for Canada, with Health Minister Patty Hajdu unable to say Tuesday whether the trend is a temporary blip — or a cause for larger concerns.

"It's hard to speculate because we still have time to actually keep these numbers under control if we all work together as governments and as individuals," Hajdu said.

"But listen, we can't rule that out. We can't rule out that we could continue to see these numbers rise across the country. And that is the real risk of COVID-19."

When Trudeau announced last month that he was proroguing Parliament, he said it would return with a throne speech on Sept. 23 that would set out a bold new agenda to rebuild a healthier, safer, fairer, greener, more inclusive, more competitive economy.

But that was before the recent resurgence in COVID-19 cases, which has thrust the spotlight on preparing for the worst — including the possibility of renewed lockdowns. The throne speech is now expected to focus more on getting through the pandemic than how to rebuild after it's over.

The threat posed by COVID-19 was underscored on Monday when the Bloc Quebecois announced that leader Yves-Francois Blanchet and the rest of his caucus were self-isolating after a staff member tested positive for the illness. The positive test came after an in-person caucus meeting.

Ministers said they were following public-health guidelines to prevent the spread of COVID-19 during their cabinet retreat in Ottawa, which included sitting at several different tables and wearing masks during the closed-door meetings.

Yet the Bloc's experience also focused attention on the pending return of Parliament next week, including the question of how many members of Parliament would be allowed to sit in the House of Commons and how voting on legislation will be conducted.

This was a source of contention between the Liberals and Conservatives, in particular, in the spring, with disagreements over whether electronic voting should be allowed given a number of technical challenges and questions about how certain parliamentary rules would be applied.

The disagreement was largely unresolved. While the Liberals and NDP opted to adopt a hybrid model allowing MPs to attend a special COVID-19 committee in person or remotely, that approach was not extended to the full House of Commons.

Parties instead continued to send a minimum number of MPs to represent the rest of the party for a select number of House of Commons sittings.

Government House leader Pablo Rodriguez on Tuesday suggested the hybrid model was the only answer to ensure all MPs have their voices heard in the House while remaining safe.

Heritage Minister Steven Guilbeault urged the Conservatives to agree to such a measure.

"We believe that the return of the House should continue on the basis of the hybrid model that we have so that there's not 338 people packed into a very small room where we could really contaminate each other," Guilbeault said.

"And I really hope the Conservative party will come around and understand that safety is a very important thing for Canadians."

The throne speech is expected to include three main priorities: measures needed to protect Canadians' health and avoid another national lockdown; economic supports needed to help keep Canadians financially afloat while the pandemic continues; and longer-term measures to eventually rebuild the economy.

In particular, it is expected to promise more funding for health care, including long-term care homes, which have borne the brunt of the more than 9,000 deaths from COVID-19 in Canada. It is also expected to promise money for child care so that parents — especially women, hardest hit by the shutdown — can go back to work.

Details on the longer-term recovery measures won't be revealed until an economic statement later in the fall.

Emergency aid to help Canadians weather the pandemic has already pushed the federal deficit for this year up to an unheard-of $343 billion.

With the government operating on the assumption that the pandemic will continue to plague the globe for at least two more years, unprecedented amounts of red ink seem destined to continue flowing.

Guilbeault defended the spending to date, saying it was used to help Canadians through the pandemic. He said Canada isn't alone in the world in terms of spending to counter the damage of COVID-19.

"And compared to many of our trading partners, Canada still has a very advantageous fiscal situation," he said. "Now we do have to be careful, and we will be making decisions, important decisions, in the coming weeks as to what's our path forward. But these decisions haven't been made."