TORONTO — Live concerts are cancelled in most parts of the country for the foreseeable future, yet Ticketmaster and other Canadian ticket portals have continued to sell access to upcoming events that aren't happening.
Apr 23, 2020 1:10 PM By: Canadian Press 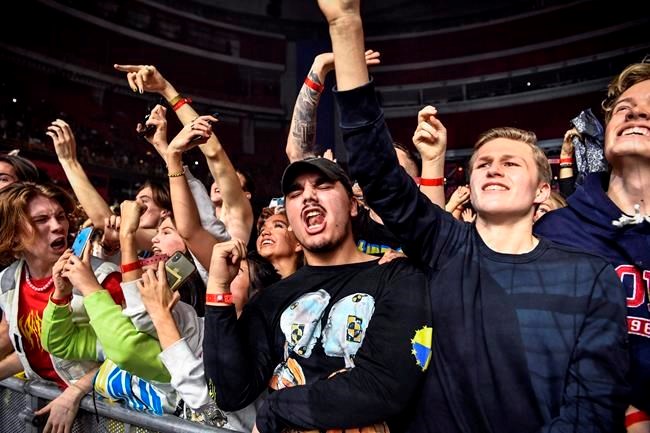 TORONTO — Live concerts are cancelled in most parts of the country for the foreseeable future, yet Ticketmaster and other Canadian ticket portals have continued to sell access to upcoming events that aren't happening.

Several dozen concerts, including a DJ set with Andrew Rayel originally slated for Friday at Toronto's Toybox Nightclub, were still available on Ticketweb, a portal owned by Ticketmaster, until after the company was contacted by The Canadian Press on Wednesday.

And concerts once booked throughout May at the PNE Forum in Vancouver were listed by non-profit retailer Ticketleader until the company responded to inquiries on why they were still up for sale.

Those PNE shows, which included a Kaytranada concert previously scheduled for May 9, have now been marked "postponed" by Ticketleader until an undetermined new date.

The lack of action by ticketsellers illustrates a divide between provincial bans of large public gatherings and how the concert industry is handing the fallout of COVID-19.

Several other events organized by Live Nation continued to be available for purchase on Ticketweb until Wednesday afternoon, including a May 2 concert with New York-based singer Margaret Glaspy at a Vancouver venue, and a May 10 date in Toronto with French electronic act Hyphen Hyphen.

Other dates, including a Vancouver performance by Ivan & Alyosha on May 9 that was postponed by the artists weeks ago, disappeared from Ticketweb on Wednesday.

A Toronto stop on a cancelled tour for Australian singer-songwriter Matt Corby and pianist Lang Lang were still listed on reseller site Stubhub as of Thursday.

Ticketmaster representatives provided a statement on behalf of its Ticketweb portal saying it operates a self-service platform for small clubs and independent promoters, who were among the small businesses affected by COVID-19 shutdowns.

"Given the complexities of rescheduling event dates with resource-constrained staff and evolving information, these event organizers have needed more time to delist their events as they work tirelessly to make decisions that will ultimately affect their individual livelihoods," the company said.

Ticketmaster has already faced backlash for how its handled customers affected by COVID-19 cancellations.

The company was widely criticized for its decision to alter its refund policy in the early days of the pandemic, allowing it to decline refunds. After pressure from political leaders, and a reported class action lawsuit filed in the U.S. by a Rage Against the Machine fan, Ticketmaster revised its stance by outlining plans to launch a refund program May 1 "on a rolling basis, for all events impacted by COVID-19."

The program, which it's calling "Rock When You're Ready," will offer "concert cash credits" of up to 150 per cent of the face value for future ticket purchases, or ticketholders can choose to donate their tickets to a health-care worker through a Live Nation initiative. Refunds will be issued within 30 days after a concert's cancellation, or a new date has been announced, Ticketmaster said in a statement.

The problems surrounding COVID-19 are the latest in a lengthy list of consumer complaints against the ticket giant, which faced widespread scrutiny in Canada four years ago when tickets to The Tragically Hip's final shows were snapped up by ticket bots and reappeared on reseller sites with a massive markup.

Pascal Courty, a professor of economics at University of Victoria, has studied the live events and tickets resale industry, and calls the latest moves "profiteering" in a pandemic.

"Ticketmaster is creating a huge mess because once the event is cancelled, knowing how much you're going to give back to these people, it's going to be difficult."

However, all of the concerts won't be cancelled outright, and ticketsellers who are buying tickets now will likely be able to use them whenever their show does materialize.

Shelley Frost, who oversees Ticketleader as the president of Pacific National Exhibition, said the company is working with concert promoters to reschedule dates, including the Kaytranada show. She said that's why Ticketleader continued to make the events available to purchase, even though there was no certainty when — or if — they would go forward.

The British Columbia government has prohibited gatherings of more than 50 people in one place until at least the end of May.

"Promoters have requested that people are still allowed to buy tickets for the show, regardless of what the date is," Frost said shortly before Ticketleader updated its website to note the May 9 postponement.

"What we've said in the meantime... is that we're going to take the ability to continue purchasing tickets down, at least through May 30."

Frost said Ticketleader would honour refunds if ticketholders made the request.

"There is absolutely no intent to try and hold money unnecessarily."

This report by The Canadian Press was first published April 22, 2020.

Shopify yet to inform federal privacy commissioner of breach involving 'rogue' staff
Sep 23, 2020 6:05 PM
Most actively traded companies on the Toronto Stock Exchange
Sep 23, 2020 5:48 PM
Comments
We welcome your feedback and encourage you to share your thoughts. We ask that you be respectful of others and their points of view, refrain from personal attacks and stay on topic. To learn about our commenting policies and how we moderate, please read our Community Guidelines.