Regulator backs away from statement on flight refunds, saying it's not 'binding'

The Canadian Transportation Agency is backing away from an earlier statement on flight vouchers, saying its initial position on airlines' right to issue travel credits instead of a refund for cancelled trips is "not a binding decision.
Apr 23, 2020 4:58 PM By: Canadian Press 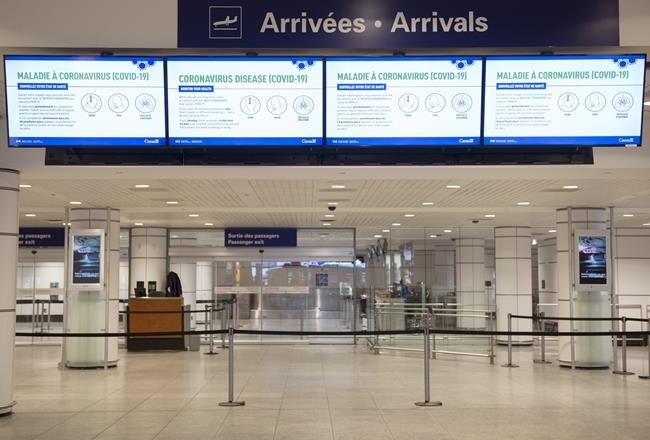 The Canadian Transportation Agency is backing away from an earlier statement on flight vouchers, saying its initial position on airlines' right to issue travel credits instead of a refund for cancelled trips is "not a binding decision."

The latest statement could open the door to more refunds from carriers that have cited the agency's stance in denying passenger requests to get back cash for services not rendered.

Late last month, the regulator said the passenger rights charter does not oblige airlines to refund customers for flights cancelled due to the COVID-19 pandemic. A post Tuesday from the agency reiterates that position, but also stresses customers' right to demand a refund based on the "tariff" — the contract between passenger and carrier.

"The statement on vouchers suggests what could be an appropriate approach in extraordinary circumstances, but doesn't affect airlines' obligations or passengers' rights," the agency said in the FAQ section of its website.

"Some airline tariffs might not provide for a refund and others might include force majeure exceptions to refund provisions."

The CTA further notes that travellers who are denied a refund can file a complaint — a word left out of the regulator's original statement on vouchers.

The clarification comes in response to "a number of questions" about vouchers, the agency said.

It also comes less than one week after the Air Passenger Rights advocacy group launched a legal action in the Federal Court of Appeal seeking to have the voucher statement removed from CTA's website.

Gabor Lukacs, who heads the group, says the follow-up post amounts to a "backtrack" but that the statement remains "misleading" by not spelling out passenger rights based on precedent and contract law.

In a telephone interview, he compared the statement by the tribunal to "an NHL referee picking up a stick and scoring for one of the teams — that referee has to be taken off the ice" and barred from handling complaints.

The agency's qualification follows a class action lawsuit claiming airlines have unfairly denied customer refunds. A a pair of petitions with more than 50,000 signatures also call on Ottawa to place Canadians' rights above those of carriers and to refuse financial relief to any airline that does not reimburse travellers.

The transportation authority says vouchers valid for two years can offer a "reasonable approach" during a crisis that could end up leaving passengers out of pocket, a risk "exacerbated by the liquidity challenges faced by airlines" as travel plummets.

"The statement on vouchers, although not a binding decision, offers suggestions to airlines and passengers in the context of a once-in-a-century pandemic, global collapse of air travel, and mass cancellation of flights for reasons outside the control of airlines," the agency said.

Canada stands apart from the United States and the European Union, where officials have ordered airlines to reimburse customers for cancelled flights. The CTA chalks up the difference to U.S. and EU legislation establishing a "minimum obligation" to refund, which Canada lacks.

Canadian airlines have been sending repatriation flights and offering vouchers, but none advertise refund policies for cancelled routes.

WestJet's website highlights future travel credit for cancelled flights, but says: “We are not processing refunds to original form of payment at this time.”

The disclaimer comes despite the company's tariff, which states that “the unused portion of the passenger's ticket(s) will be refunded” in the same form as it was purchased, “should the alternate transportation proposed by the carrier not meet the passenger's satisfaction.”

Passenger protection regulations rolled out last year stipulate that, in the event of a cancellation that is within the carrier's control, airlines must "refund the unused portion of the ticket" if alternate travel arrangements do not suit the customer's needs.

If a flight is cancelled for reasons outside an airline's control, however, the new rules only require alternate arrangements, not a refund — though tariffs at multiple airlines lay out passengers’ right to a refund as an alternative.

Several decisions by the CTA in the past seven years seem to affirm air travellers' right to a refund regardless of whether a flight cancellation is beyond the airline's control.

A 2014 ruling reiterates "the right of passengers to be refunded for the unused portions of their tickets if the carrier is unable to provide transportation on its services or on the services of other carrier(s) within a reasonable period of time."

A 2013 decision concerning Porter Airlines found that "it is unreasonable for Porter to refuse to refund the fare paid by a passenger because of its cancellation of a flight, even if the cause is an event beyond Porter's control."

This report by The Canadian Press was first published April 23, 2020.

Insurance firms pledge small-business help as pressure to address rising rates mounts
Oct 29, 2020 5:00 AM
FBI warns ransomware assault threatens US healthcare system
Oct 28, 2020 11:17 PM
Suncor Energy misses expectations with $302M loss on lower production, prices
Oct 28, 2020 8:30 PM
Comments
We welcome your feedback and encourage you to share your thoughts. We ask that you be respectful of others and their points of view, refrain from personal attacks and stay on topic. To learn about our commenting policies and how we moderate, please read our Community Guidelines.