TORONTO — The federal government needs to move quickly to support the Canadian news industry amid the economic downturn brought about by the response to the COVID-19 pandemic, an industry spokesman said Monday.
Apr 6, 2020 7:19 PM By: Canadian Press 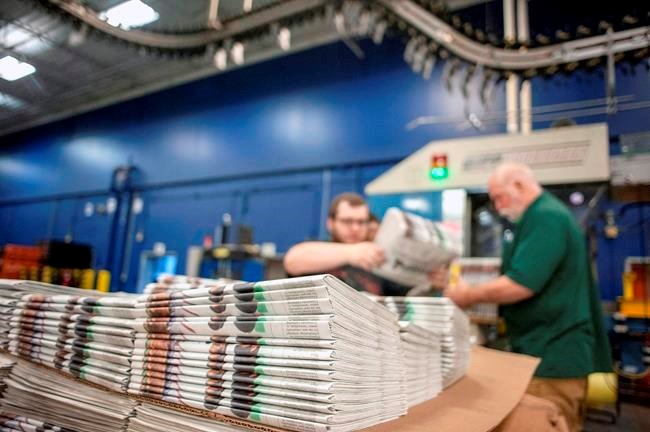 TORONTO — The federal government needs to move quickly to support the Canadian news industry amid the economic downturn brought about by the response to the COVID-19 pandemic, an industry spokesman said Monday.

Bob Cox, who is publisher of the Winnipeg Free Press as well as chairman of the News Media Canada industry association, says the situation is dire because advertising revenue has plunged and continues to fall rapidly.

"We need help now. We don't need help at the end of May, in June, July or August," Cox said Monday in a phone interview.

"We have to have cash in the bank to meet our obligations, and that includes paying employees and other bills."

Cox said that, from what he has heard, it could be May or June before the COVID wage subsidy arrives at the companies that need it.

"That's not good enough. Because businesses will die, including news media businesses."

In addition to the general COVID-19 wage subsidy program, Cox wants money from an industry specific program that was announced in the 2019-20 budget.

The politically charged initiative promises $595 million over five years, including refundable tax credits that pay for 25 per cent of the salaries of journalists working for qualified news outlets.

Cox says "not a penny" of that money has flowed to the eligible news organizations.

"If we had that money in the bank, we wouldn't be in the situation we're currently in. We'd be in a better position," Cox said.

"If they had any further help, such as the (COVID) wage subsidy program they've announced, we'd be in better position."

The goal is to have advertising-funded newspapers and online news sites survive until revenues start to return, Cox said.

"But we have to get there first and we can't get there without any help now. That's the real problem."

As publisher of the Winnipeg Free Press, Cox took a temporary 50 per cent pay cut and asked for temporary, emergency wage cuts from the organization's unionized and non-union employees. Unifor members agreed in a Sunday vote.

The chief executive of Postmedia Network Corp., which operates Canada's largest chain of newspapers, has also announced through an internal memo that he'll take a salary reduction of 30 per cent.

Postmedia CEO Andrew MacLeod wasn't immediately available for comment Monday on what other measures are being considered.

Spokesmen for Unifor and CWA Canada — two unions whose affiliates represent most of Postmedia's employees — said they hadn't received any request for wage cuts as of Monday.

At Torstar Corp., which owns the Toronto Star as well as other daily and community papers, employees were told Monday that there would be 85 permanent layoffs across the organization.

Of the layoffs, 11 are in editorial positions at Torstar's community newspapers, which don't include the dailies, but none are reporters, a Torstar spokesman said.

He said Torstar chief executive John Boynton told staff Monday that about 11 members of senior Torstar management will take 20 per cent reductions in salary and board of directors will receive 20 per cent less compensation.

The Winnipeg Free Press's inside workers, represented by a Unifor local, voted Sunday to ratify the two-week wage cut sought by Cox. The agreement includes a review the situation at the end of two weeks.

The agreement reduces wage rates for the higher-paid Tier 1 group of Unifor member employees by 20 per cent, while wages for Tier 2 employees fall 12 per cent or minimum wage, whichever is higher.

The same level of cuts also apply to most management and non-union staff at the newspaper.

This report by The Canadian Press was first published April 6, 2020.

Torstar holds an investment in The Canadian Press as part of a joint agreement with subsidiaries of the Globe and Mail and Montreal's La Presse.