PG&E to plead guilty to lethal crimes in 2018 wildfires

SAN FRANCISCO — Pacific Gas & Electric will plead guilty to 84 counts of involuntary manslaughter for a swath of death and destruction left behind after its fraying electrical grid ignited a 2018 wildfire that decimated three Northern California
Mar 23, 2020 3:54 PM By: Canadian Press 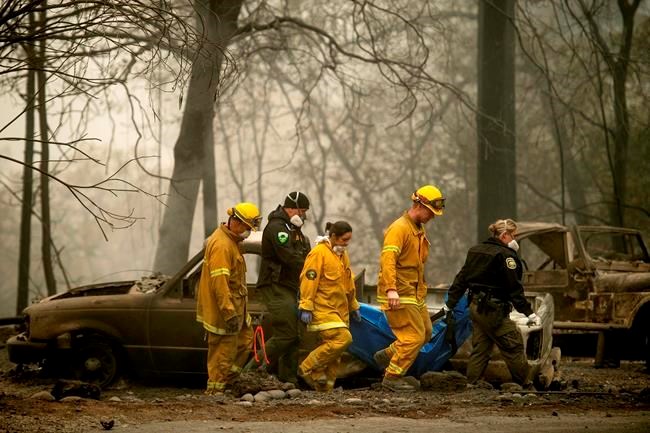 SAN FRANCISCO — Pacific Gas & Electric will plead guilty to 84 counts of involuntary manslaughter for a swath of death and destruction left behind after its fraying electrical grid ignited a 2018 wildfire that decimated three Northern California towns and drove the nation's largest utility into bankruptcy.

The plea agreement announced Monday resolves the charges facing PG&E as part of a previously sealed indictment in Butte County. It marks the second time this decade that the company's neglect has culminated in it being deemed a criminal. PG&E already is serving a five-year criminal probation imposed after it was convicted of six felony counts for falsifying records and other safety violations underlying a natural gas explosion that blew up a and killed eight people in San Bruno, California.

As with its prior criminal conviction, no one from PG&E will go to prison for the company's felony crimes. Instead, its plea agreement with the Butte County District Attorney's office calls for PG&E to pay a $4 million fine, the maximum allowed. It will also help pay for efforts to restore access to water for residents affected by the loss of a canal destroyed by what became known as the Camp Fire.

“We cannot replace all that the fire destroyed, but our hope is that this plea agreement, along with our rebuilding efforts, will help the community move forward from this tragic incident,” PG&E CEO Bill Johnson said.

In a statement, Butte County District Attorney Mike Ramsey said he hopes the plea agreement will bring “a bit of a sense of justice done" for the fire.

Butte County officials have pegged the 2018 wildfire's death toll at 85, but Ramsey disclosed Monday that further evidence cast doubt about whether one of the deaths was directly caused by the blaze.

PG&E is scheduled to enter its plea and face sentencing at a court hearing scheduled for April 24.

The Nov. 8, 2018, fire was fanned by strong winds, forcing thousands of people to quickly flee in their cars as flames ripped through the narrow canyon communities. Survivors described caravans of vehicles engulfed by the fire.

The dead were found in burned-out cars, in the ruins of their homes and next to their vehicles, apparently overcome by smoke and flames before they could get inside them.

In some cases, all that remained of the dead were charred fragments of bone so small that investigators used a wire basket to sift and sort them.

The grisly scene unfolded slightly more than a year after a series of 2017 blazes tore through Northern California and killed 44 people. Although state investigators didn't find PG&E culpable for those fires, the company is accepting responsibility for them in its bankruptcy case as part of a $13.5 billion settlement that will pay the victims of the 2017 and 2018 fires.

Less than three months after the Butte County fires, PG&E filed for bankruptcy in early 2019 to help shield the utility from more than $50 billion in claimed losses stemming from a badly outdated electrical grid. PG&E has settled those claims for $25.5 billion, including the fund set up for the wildfire victims.

Since the bankruptcy filing, PG&E hired Johnson as its new leader to shape up its culture as the company steps up its efforts to improve the safety and reliability of its power lines.

Johnson hailed the plea agreement as a sign that PG&E is “working to create a better future for all concerned. We want wildfire victims, our customers, our regulators and leaders to know that the lessons we learned from the Camp Fire remain a driving force for us to transform this company."

Johnson has previously acknowledged that it will take many years to pull that off while PG&E pours an estimated $40 billion into badly needed upgrades.

In the meantime, PG&E plans to periodically turn off the power during extremely windy and dry conditions to minimize fire risks in parts of a sprawling service territory that provides electricity to 16 million people. By its own admission, PG&E bungled the deliberate blackouts it imposed last autumn to the exasperation of customers and community leaders who complained about not being told about the outages.

California Gov. Gavin Newsom had previously expressed doubts about whether the company has made enough changes to reform its ways, and he had been threatening to block PG&E's plan to get out of bankruptcy this summer. PG&E's chief regulator, the California Public Utilities Commission, still must approve the company's bankruptcy plan, a decision that's expected within the next few weeks.

Last week Newsom dropped his objections amid the coronavirus outbreak that prompted him to order everyone in the state to remain in their homes as much as possible to reduce the spread of COVID-19.

California holds unusual leverage over PG&E's fate in bankruptcy because the company needs state approval of its plan to qualify for coverage from a wildfire insurance fund that the state created last summer. Newsom backpedaled in a Friday bankruptcy court filing, saying he now believes PG&E's plan qualifies it for the coverage. As part his deal with PG&E, the Democratic governor is still reserving the right to pursue a government-financed takeover of the company if it doesn't emerge from bankruptcy by a June 30 deadline.

This story has been corrected to reflect that California Gov. Gavin Newsom has dropped all his objections to PG&E's bankruptcy plan. An earlier version said he had only dropped some objections