New York Gov. Andrew Cuomo said the state is scouring the globe for medical supplies and scouting temporary hospital locations as the coronavirus crisis grows.
Mar 22, 2020 1:14 AM By: Canadian Press 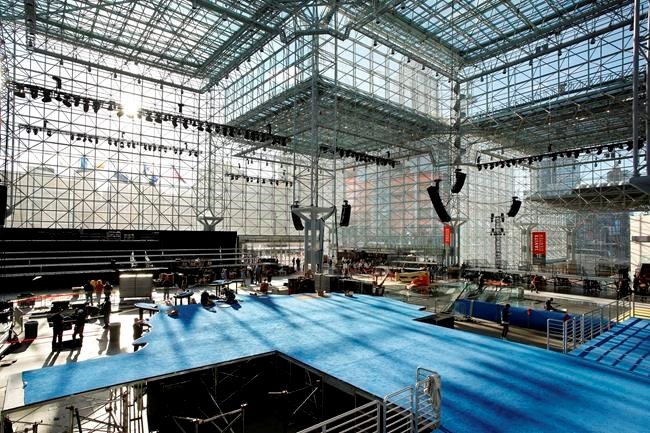 More on the latest coronavirus developments Saturday in New York:

Cuomo said the goal is to quickly boost the state's hospital capacity from around 50,000 beds to 75,000 beds. About 1,600 people have been hospitalized so far.

The Federal Emergency Management Agency has declared a major disaster in the state, freeing up access to billions of dollars in relief funding.

As of late Saturday night, the disease has killed at least 76 people in New York state, according to a tracking effort at Johns Hopkins University. At least 60 of those deaths were in New York City.

Cuomo said the state is looking to see if the Jacob K. Javits Convention Center in Manhattan could be suitable for 1,000 requested field hospital beds that would be supplied by FEMA in a “tent configuration” with equipment and staff.

Also Saturday, the state was scouting four locations for temporary hospitals that would be built by the Army Corps of Engineers, Cuomo said. The possible sites include the Javits Center, Stony Brook University and SUNY Old Westbury on Long Island, and the Westchester County Center north of the city.

“Everything that can be done is being done," Cuomo said.

Officials have identified 2 million masks that can be sent to hot spots, and apparel companies are pivoting to make masks, Cuomo said. A million masks were being sent Saturday to New York City hospitals, and 500,000 to Long Island.

Because of dwindling supplies, hospitals have been rationing supplies and asking staff to reuse masks until they become soiled. Columbia University’s chief surgeon, Dr. Craig Smith, said hospitals in the New York-Presbyterian system are burning through about 40,000 masks a day — about 10 times the normal amount.

The state is also rounding up critically needed ventilators, purchasing 6,000 to deploy to the most critical areas and investigating whether multiple patients can be served by a single ventilator, Cuomo said.

“We are literally scouring the globe looking for medical supplies,” he said.

The state also will immediately start conducting trials of an experimental COVID-19 treatment with hydroxychloroquine and Zithromax, Cuomo said.

Hydroxychloroquine, a malaria drug, has been touted by President Donald Trump as a possible answer-in-waiting to the outbreak, though many experts caution more testing needs to be done. Cuomo said the Food and Drug Administration is sending 10,000 doses to the state.

‘A HORROR TO IMAGINE’

Smith has been raising alarms about the rapid surge of patients and dwindling supplies in daily letters to colleagues that are being posted to the Columbia surgery department's Twitter account.

Smith warned that new projections estimate the number of coronavirus patients will continue to grow over the next 22 to 32 days, overwhelming the New York-Presbyterian system’s emergency rooms and intensive care units, even with measures taken to build new capacity. The projections show the system's hospitals needing 700 to 934 ICU beds when the outbreak reaches its peak.

Just Friday, he wrote, the system saw a 50% increase in coronavirus patients, making for a total of 300 being treated and another 200 awaiting test results.

“Nothing would give me greater pleasure than to apologize profusely in a few weeks for having overestimated the threat,” Smith wrote. “That would mean we never exceeded capacity, and that mortalities and morbidities rarely seen in non-pandemic circumstances were avoided. The next month or two is a horror to imagine if we’re underestimating the threat.”

At NYU Langone Health, another hospital operator, the “ERs are extremely busy” and some patients are being treated in space retrofitted to expand capacity, spokesman Jim Mandler said Saturday.

The Federal Aviation Administration briefly suspended flights to New York City-area airports on Saturday after a trainee at a regional air-traffic control hub on Long Island tested positive for the disease.

In an alert posted online, the FAA advised air traffic controllers to "stop all departures" to John F. Kennedy, LaGuardia, Newark and other airports in the region because of staffing issues at the Ronkonkoma facility, which the agency says primarily handles high-altitude, cross-country flights.

The halt, which also affected Philadelphia's airport, was lifted after about 30 minutes. Controllers were initially warned it could last several hours.

In a statement, the FAA said the Ronkonkoma facility remains open. The agency said the trainee was last there on Tuesday and that is it working to figure out what other workers he may have interacted with.

Air traffic controllers at Kennedy operated from an alternate location on airport property this week after a technician assigned to the airport's control tower tested positive for COVID-19.

The FAA said that the technician hadn't been to work since March 11 and that controllers returned to the tower after precautionary cleaning.

Drivers without an E-ZPass tag should enter the highway through a cash lane without taking a ticket. When they exit, drivers should tell a collector which exit they entered and provide license plate information. A bill will be sent to the owner of the vehicle in about a month.

There are no changes for drivers with E-ZPass.

Also Saturday, Cuomo ordered the suspension of in-office visits at the Department of Motor Vehicles. Online transactions for license renewals will still be available. The governor said expiration dates on licenses and permits will be extended.

Hill reported from Albany. The Associated Press receives support for health and science coverage from the Howard Hughes Medical Institute’s Department of Science Education. The AP is solely responsible for all content. Follow AP coverage of the virus outbreak at https://apnews.com/VirusOutbreak and https://apnews.com/UnderstandingtheOutbreak.