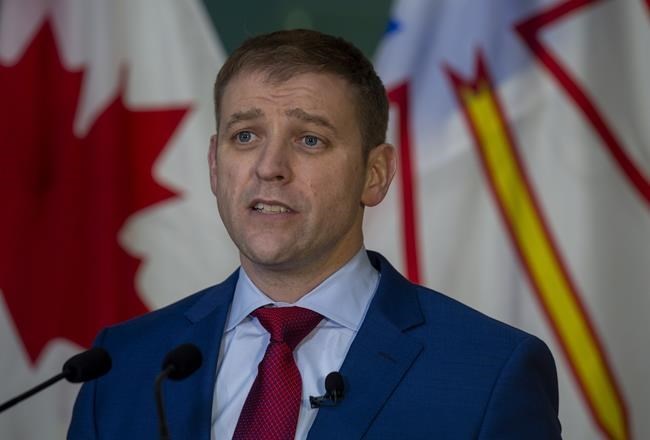 ST. JOHN'S, N.L. — Newfoundland and Labrador's premier moved to mollify voters on Saturday as news broke that a long-awaited provincial economic recovery report would be delayed.

Andrew Furey said he received the news on Friday that the interim report from the so-called premier's economic recovery team would be delayed by up to six weeks. The Liberal leader, seeking re-election in an ongoing campaign bogged down by the COVID-19 pandemic, held a Saturday morning news conference to express both disappointment with and understanding of the decision to delay the long-sought report.

"This extended writ period, and the complexities of any pandemic anytime in any jurisdiction around the world, has certainly caused delays," he said. "But again it's not uncommon for governmental reports to have delays in and of themselves."

The report has been a thorn in Furey's side throughout the province's troubled election, with the Progressive Conservatives saying he was trying to sneak a "secret plan" for cuts past voters.

Before the election was delayed by a COVID-19 outbreak in St. John's, voters were scheduled to go to the polls before they'd seen a draft of the report reviewing the province's operations and fiscal capacity.

Newfoundland and Labrador's most recent budget posted a $16.4-billion net debt, giving it the the highest net debt-to-GDP ratio in the Canada.

With the election extended — mail-in ballots must now be postmarked by March 12 — and the report due Sunday, it seemed like voters would see the review after all.

The woman tasked with leading the review effort dashed those hopes on Saturday morning.

"We are just not going to be able to complete our work in the time that I had originally thought," Moya Greene said at a news conference. "There is a lot of ground that we have been asked to cover and we want to cover it well."

Her appointment to lead the economic recovery team has been controversial. The head of the province's federation of labour quit the team in December, saying it was run with a "top-down" approach.

Shortly after, the head of a public sector union said he feared Greene would recommend layoffs and privatization.

Greene said Saturday she'd stopped updating Furey about the team's progress once the election was called. Instead, she said she told the clerk of the executive council at least a week ago that the initial draft report would be delayed. Furey said he was told of it Friday.

In a release Saturday, progressive Conservative leader Ches Crosbie said it's "unbelievable to think the clerk wouldn’t brief the premier."

Furey insisted the fear surrounding the report is unfounded, accusing his opponents of turning the review into a "political football."

"There is no boogeyman here," he said. "We said from the beginning we are going to allow full public consultation on this so there's nothing to be fearful of here."

Furey said he sympathizes with voters frustrated by the delay during an already prolonged, chaotic election in the midst of a global pandemic.

"I can sympathize with everybody with delays and their businesses in their personal lives as we try to navigate this pandemic," he said, adding that the report, as well as the people and strategy behind it, are worthy of voters' continued trust.

"We're in a complex situation that requires complex solutions," he said. "These are a group of volunteers who have taken their time, spoken with many stakeholders and will continue to speak with others going forward to make the recommendations. And again, everyone will have a chance to have a say."

This report by The Canadian Press was first published Feb. 27, 2021.