SANTA FE, N.M. — George R.R. Martin, the famed author of the “Game of Thrones” fantasy series, has joined a group to buy the historic Santa Fe Southern Railroad.
May 26, 2020 10:29 AM By: Canadian Press 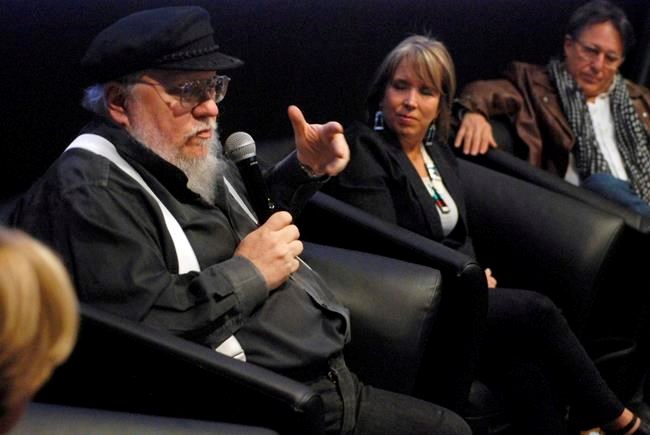 Passenger excursion trains to Lamy ended in 2012 and some residents have been seeking ways to get them started again.

The Atchison, Topeka and Santa Fe Railway reached Lamy in 1879. Though it had been initially planned to roll into Santa Fe, railroad executives and engineers said it would be too difficult to build a main track to the capital city because of the steep grade in the mountainous environment, so they settled for a spur line.

The first Atchison, Topeka and Santa Fe train to reach Santa Fe arrived in February 1880. The train served the city for well over a century.

In 1991, the successor to the Atchison, Topeka and Santa Fe Railway closed the spur. The Santa Fe Southern Railway formed to buy the right of way, buildings, and equipment for the short-line operation.

Oppenheimer said the trio did not want to see the financially challenged railway fall into further disrepair or fade away. “There’s something about train travel that brings you back to a time that we assume was a simpler, more community-based time, long before the internet, before air travel, even before television,” she said.

Oppenheimer added the trio plan to ultimately provide “a super-fun train experience that builds in the history and culture and natural beauty of New Mexico.”

Plans not only include repairing the track and bridges between Santa Fe and Lamy, where a small depot still awaits passengers on the Amtrak line that travels from Chicago to Los Angeles and back, but provide an array of entertaining arts and cultural events on train excursions and at nearby stops.

If all goes well, they hope to renew a deal with Amtrak to keep the Southwest Chief line stopping at Lamy and perhaps restore a now-vacant position for a ticket agent at the site.

No one involved with the purchase was willing to say how much the three investors paid, but Oppenheimer said it would cost “in the millions” to repair the track and bridges between Santa Fe and Lamy and restore some of the roughly 20 train cars, which date to the 1920s.

The Bayonne, New Jersey-born Martin is best known for the book series that begins with “A Game of Thrones.” In recent years, the Santa Fe resident has helped with projects around New Mexico.