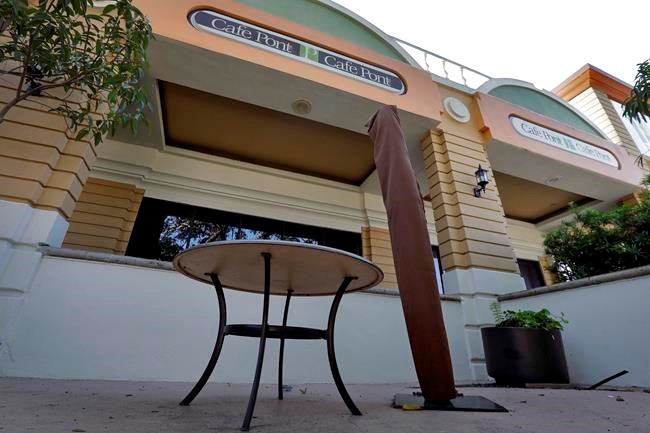 FORT LAUDERDALE, Fla. — Florida’s unemployment rate reached a record high in April of almost 13%, tripling in one month as the economic slowdown from the coronavirus pandemic took hold, as some of the state's largest employers such as Walt Disney World and Universal Studios shed workers, data released Friday shows.

Florida’s unemployment rate skyrocketed to 12.9% in April from 4.3% in March and from 2.8% in February, before the pandemic caused a state and nationwide closure of many businesses. About 1.2 million Floridians had lost their jobs out of a workforce of 9.5 million when this survey for the U.S. Bureau of Labor Statistics was conducted in mid-April, a number that has continued to climb into May.

“I’d like to see the economy bounce back as quickly as possible, but it’s just not that simple,” Gov. Ron DeSantis said Friday.

The national unemployment rate reached 14.7% in April, up from 3.5% in February, reaching levels not seen since the Great Depression of the 1930s. The state’s previous record unemployment rate since World War II was 11.3% in early 2010.

Florida's economy is heavily dependent on tourism, an industry that has collapsed in two months as people are forced to stay close to home because of the virus. Still, Florida hasn't been hit as hard as some other tourism-reliant states — Nevada's unemployment rate hit 28% in April and Hawaii's reached 22%.

Florida's theme parks closed in March, but some are making small steps toward reopening. Disney World reopened a shopping area this week, while Universal reopened an entertainment area last week and will have a limited reopening of its park next month. SeaWorld also expects to reopen next month. Florida's theme parks are an $86 billion industry whose guests flood into hotels and restaurants, primarily in the Orlando area.

The cruise industry, an economic driver in numerous coastal cities, has also been shuttered and agriculture has suffered as institutional buyers such as restaurants, hotels and schools have been closed or severely restricted.

Two university economists say the state's actual unemployment may be about 20% as nearly a million workers have left the force since February and are no longer counted in the statistics. These are people who would have continued working if they had not lost their jobs, but have now given up searching for new employment.

“It is still shocking to see,” said Sean Snaith, director of the University of Central Florida’s Institute of Economic Forecasting. “The market was in fantastic shape before the public health shutdown" and businesses “were struggling to find workers.”

He and Hector Sandoval, director of the University of Florida's economic analysis program, both believe May's unemployment figures will be even higher before the state might see some progress in June as businesses slowly reopen.

Still, Sandoval worries that state and local government employees are going to be laid off next as the sales tax revenue provided by tourists has all but disappeared.

“The worst is already gone, but I can see a slow recovery for Florida,” Sandoval said.

Snaith believes Florida's long recovery should begin soon as the business restrictions imposed to combat the virus are lifted locally and nationally.

“This was self-inflicted, it wasn't generated out of any inherent weakness in the economy,” he said. “As we reverse these public health measures...these numbers aren't going to persist in the way they would in a typical recession.”

Angie Orth, a self-employed writer and photographer who freelances for Universal, Disney and other tourism businesses, says by early March all her projects were gone.

“We went from a full calendar through November to nothing,” said Orth, 38 of Jacksonville. “Many of the people who pay us have been laid off or furloughed. It’s dire.”

She and her sister also own a short-term vacation rental, an industry Florida shut down, drying up her only other income source. DeSantis opened vacation rentals for much of the state this week, but her county still won’t allow it.

Problems with the state's unemployment system, which delayed payments to hundreds of thousands of Floridians, took her nearly two months to overcome, a problem she laid on DeSantis and his administration.

“It’s heartbreaking to see how Florida’s government has let us down,” she said.

DeSantis has said that nearly all the bugs have been worked out of the unemployment system and back payments have been made. He has blamed the problems on the administration of his predecessor, now U.S. Sen. Rick Scott, a fellow Republican.

Because the state's unemployment rate now exceeds 10.5%, benefits will be extended from 13 weeks to 23 weeks — but not until October. Florida has one of the lowest unemployment payments in the country at a maximum $275 a week.

The state's unemployment system suffered an apparently small data breach, it was announced late Thursday. About 100 people have been notified that their personal information may have been compromised, but the state has not said if any additional applicants were affected.