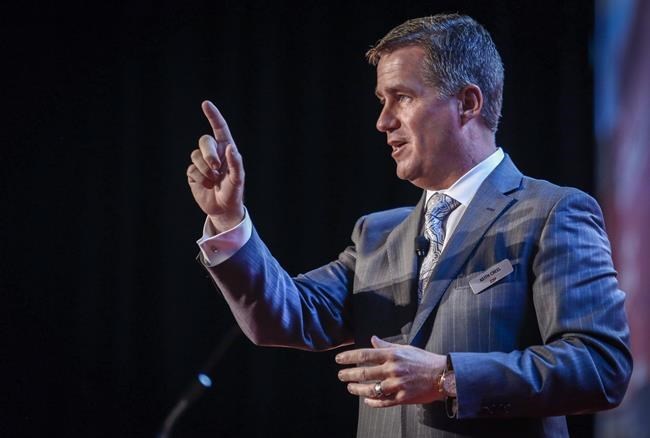 During the Calgary-based company's first-quarter financial results call Wednesday after markets closed, CP CEO Keith Creel listed off a long series of "truths" that suggest CP's offer made last month is better for shippers and investors than CN's competing bid made Tuesday.

"So, were my eyes opened yesterday when I read the press release? The truth is yes, the headline number was undeniably eye-opening: 325 bucks (US per share)," Creel said.

"But the reality is that only matters if its attainable. Unrealized value is still equal to zero. If you can't do the deal, if it's not doable, you never get there."

In response to an analyst's question, Creel said on the call CP is not considering increasing its bid for KCS because it doesn't want to put its balance sheet at risk.

On Tuesday, Montreal-based CN announced a cash-and-stock bid valued at US$33.7 billion for Kansas City, Mo.-based KCS, topping one made last month by Calgary-based CP Rail valued at US$25 billion.

Earlier on Wednesday, CP said is it is appealing to the U.S. regulator that governs railway mergers to rule on CN's claim that its offer will be assessed in the same way as CP's bid.

"Because of the far more serious public interest concerns posed by CN's proposed acquisition of KCS, CN's suggestion that its proposal should be subject to the same regulatory treatment as the CP-KCS transaction is incorrect," CP said in a news release ahead of its annual general meeting.

"Whereas a Canadian Pacific transaction raises none of the issues that motivated the new merger rules in 2001, the CN proposal raises all of them, especially competitive and downstream consolidation concerns."

CP charges that a CN-KCS merger would "destabilize" the rail network balance in North America that has prevented further consolidation of the six largest railroads for two decades, adding it would leave CP as a disadvantaged "odd-man-out" in a six-railroad North America.

CP has asked the U.S. Surface Transportation Board to rule that its combination with KCS qualifies under a waiver the regulator granted to KCS in 2001 from more stringent merger rules adopted to protect competition.

It says the STB should make it clear that CN's bid will not qualify for the same exemption.

Also Wednesday, CN announced that it has notified the STB that it intends to apply for authority to combine with KCS under current merger rules and also seeking approval of its plan to employ a voting trust so that KCS shareholders can be paid out while awaiting final STB approval.

“We believe the STB and our customers will recognize that CN presents the best solution for the continued growth, development and prosperity of the North American economy,” said CEO Jean-Jacques Ruest in a statement.

“CN has made a superior proposal and is committed to satisfying the current STB merger rules. CN is confident that the STB will approve the voting trust, which will permit KCS shareholders to crystallize the value of its U.S. and Mexico franchise, and then permit the STB to undertake the careful review process it should take following the closing into the voting trust.”

The company said it is confident it can address any reasonable remediation concerns and it supports an STB review under modern rules, as opposed to "rules from four decades ago that have been opposed by virtually every other party to have filed before the STB."

KCS's rail assets in Mexico have long made it a desirable takeover target.

A CN-KCS combination would be the third-largest Class 1 railroad in North America by revenue, while a CP-KCS merger would remain the smallest of the six remaining railroads.

CN noted a combined CN-KCS would be the fifth-largest railway by network length in the United States, behind the four big American Class 1 railroads but ahead of CP.

There was only brief mention of the proposed KCS merger at the CP annual meeting on Wednesday morning, where shareholders voted 99 per cent in favour of a share-split resolution to issue five new CP shares for each existing share.

After markets closed, CP reported first-quarter net income of $602 million on revenue of $1.959 billion, compared with $409 million on $2.0 billion in the year-earlier period.

Analysts had expected net income of $593 million on $1.995 billion in revenue, according to financial data firm Refinitiv.

This report by The Canadian Press was first published April 21, 2021.

Companies in this story: (TSX:CP, TSX:CNR)