TORONTO — Canadian companies are trying to move the needle on COVID-19 vaccinations with discounts and freebies for customers who show proof they've received their first dose.
May 9, 2021 11:00 AM By: Canadian Press 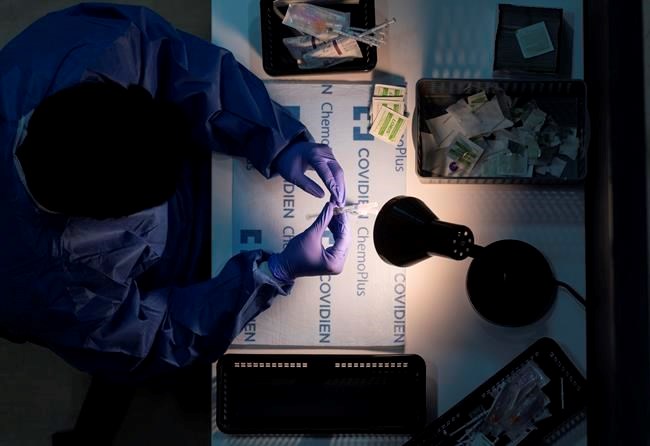 TORONTO — Canadian companies are trying to move the needle on COVID-19 vaccinations with discounts and freebies for customers who show proof they've received their first dose.

Insurers, food businesses and even tech companies are unveiling promotions aimed at convincing people to get the jab in exchange for savings and giveaways.

Experts say the offers lend corporate clout to an important cause, but also encourage consumers to return to favourite shops or discover new and local brands amid temporary lockdowns.

"You might be reluctant to over-expose yourself in non-discretionary places and that's all part of this strategy," said Joanne McNeish, a Ryerson University professor specializing in marketing.

"It's a way of carefully getting their brand in front of people."

Vaccine-related promotions are being used by Canadian companies including Sombrero Latin Food.

The grocery purveyor is offering Latin American candy to people who post a vaccine selfie or help relatives or neighbours book appointments, but stresses that vaccination is a "personal decision" and the promotion is not meant to pressure people.

"We just wanted to spread a little joy to those that felt comfortable," business development manager Corina Pardo said. "After waiting so long, we wanted each vaccination to be a little celebration."

Meanwhile, Polarity Brewing in Whitehorse will give vaccinated customers a $6 discount on a beer or food purchase.

In Kitchener, Ont., TheMuseum will offer free admission to the vaccinated through a campaign called Jabbed Like Jagger — a reference to Rolling Stones frontman Mick Jagger, who has encouraged vaccination and will feature heavily in an upcoming exhibit on his band.

Manulife Financial Inc. will give some of its vaccinated customers enrolled in its Vitality program rewards points that can be used towards gift cards or gadgets and Toronto-based financial app Drop is offering $50 in cash rewards to users who post a vaccine selfie on social media and tag the brand.

Such offers build on a U.S. trend that materialized when widespread vaccination began and the country needed to deal with the hesitant, anti-vaxxers and people forgoing their second dose.

Companies wanted to help. Burger joint White Castle offered free dessert-on-a-stick, Budweiser gave out $5 to be spent on beer, Greenhouse of Walled Lake in Michigan made free cannabis pre-rolls available and Krispy Kreme promised a doughnut everyday for the rest of the year.

While most praised the incentives, critics complained frequent doughnut consumption is unhealthy and Krispy Kreme had to defend itself.

Boston Pizza also experienced a problem linked to a promotion, when the chain's Front Street location in Toronto offered a 15-per-cent discount to vaccinated patrons.

Director of communications Marian Raty said in an email that the location was ordered to discontinue the offer, without offering additional details. The location did not respond to requests for comment.

McNeish, however, thought the discount was "clever" because it was low enough to be enticing but not inspire much abuse and offered by a location across from a vaccine centre and in an area that has seen business significantly slow.

"In that poor location, the foot traffic has been almost nothing," she said. "They must be thrilled that the foot traffic with the vaccine clinic there is maybe getting them back closer to normal."

While its hard to measure how likely any of the promotions are to generate repeat customers or encourage hesitant Canadians to get a vaccine, McNeish believes the deals are a nice perk for those anxious for the jab and one of many convincing factors for others.

"This definitely nibbles at the edges of people who are just soft hesitators and helps show here's yet another reason (to get the vaccine)," she said.

Dr. Nazeem Muhajarine, an epidemiologist and University of Saskatchewan professor specializing in community health, said people ideologically against vaccines are unlikely to be swayed by rewards, but they may encourage undecided people.

"They might jump off the fence and get their own vaccine," he said. "Something like this could tip the balance."

While Muhajarine has yet to notice specific deals in Saskatoon, he was impressed to see businesses that have struggled during the pandemic were willing to use brand recognition to advance an important message.

"They aren't just complaining about the slow down of the economy or that they have been asked to shut down or go to only curbside delivery," he said.

"Businesses want to be part of the solution."

This report by The Canadian Press was first published May 9, 2021.

Companies in this story: (TSX:MFC)