Canadian Pacific Railway Ltd. has significantly lowered its financial guidance due to the fallout from the COVID-19 pandemic, saying a drop in crude oil and automotive shipments will outweigh gains in grain traffic.
Apr 21, 2020 7:37 PM By: Canadian Press 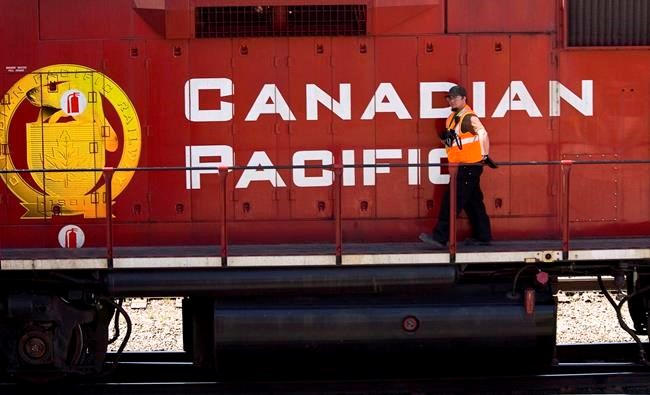 Canadian Pacific Railway Ltd. has significantly lowered its financial guidance due to the fallout from the COVID-19 pandemic, saying a drop in crude oil and automotive shipments will outweigh gains in grain traffic.

The company forecasts that revenue ton miles — a key industry metric — will fall by mid-single digits and that adjusted diluted earnings per share will remain flat in 2020.

CEO Keith Creel sought to reassure analysts and shareholders on a conference call Tuesday afternoon while acknowledging the thunderclouds looming amid "extraordinary times."

"Not only can we weather the storm...we will come out a stronger and more resilient company," Creel said. "This is a marathon, not a sprint.

"We certainly recognize that there are going to be challenging times ahead," he added. "We're not panicked, we're not distracted; we're prepared."

Creel said the company has laid off about 800 employees, with the company parking cars and locomotives across the country in alignment with lower demand.

Nonetheless, the railway set a first-quarter record for grain shipments over the past three months, moving more than 6.35 million tonnes due to strong international demand and a backlog following rolling blockades in February.

Despite heavy wheat and crude-by-rail traffic for the Calgary-based railroad operator early in the year, analysts say Canada's two main railways face a bleak year ahead.

"There is no question in our mind that freight volumes in the next few months are going to be severely depressed with no real historical precedent,'' National Bank analyst Cameron Doerksen said in a research note last week.

Automotive shipments and container traffic have been hit particularly hard after North American and Asian production hubs went into lockdown due to the virus.

"We're seeing the blank sailings as others are in the international space...and that's going to continue," chief marketing officer John Brooks said in reference to container ships, even as Chinese factories start to hum back to life.

"We're going to go through the ride like everybody else in that space," he said of container and auto volumes, though container revenues jumped six per cent year over year last quarter.

Some 40 per cent of CP Rail's revenue stems from bulk commodities — grain makes up more than half, with coal, potash, fertilizers and sulphur bringing up the rear.

Revenue from energy, chemicals and plastics rose 55 per cent last quarter, but Brooks pointed to "demand pressures across all these volumes" in the coming months, citing oversupply owing to the oil price war between Saudi Arabia and Russia.

"We're going to take that energy hit in the near term."

In its first quarter, CP saw net income fell to $409 million from $434 million in the same period last year.

The six per cent drop comes despite a revenue increase of nearly 16 per cent year over year to $2.04 billion — a Q1 record — in the quarter ended March 31, the railway said.

On an adjusted basis, diluted earnings rose 58 per cent to $4.42 per share, beating analyst expectations of $4.05, according to financial markets data firm Refinitiv.

The company's stock has declined by about 13 per cent over the past two months, a shorter fall than that of many transportation industry companies.

Companies in this story: (TSX:CP)