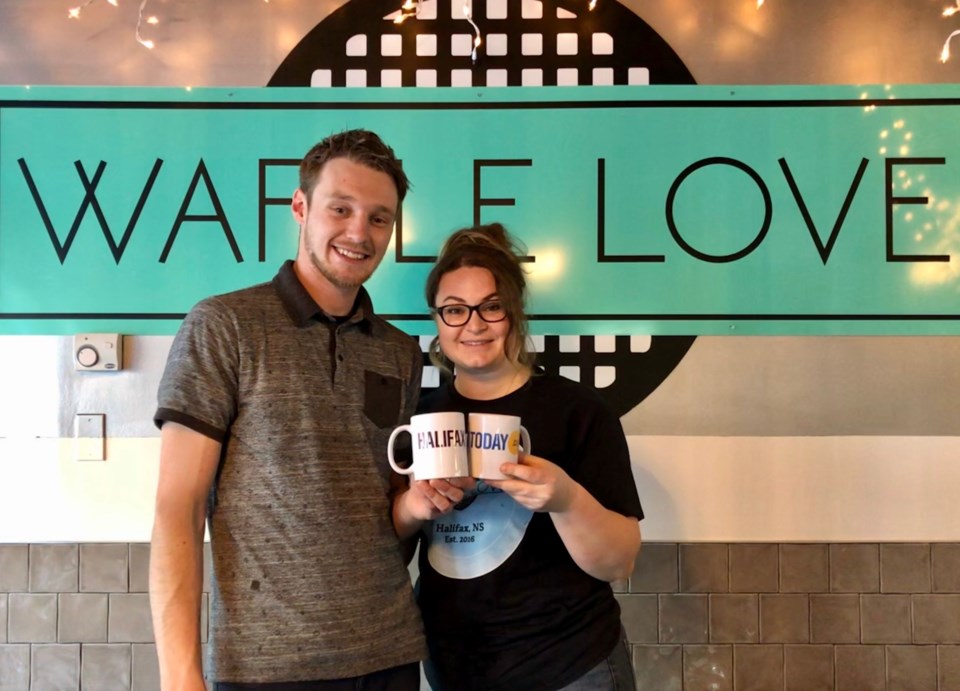 Co-owners Matthew Webb and Ania Benko, with their HalifaxToday.ca mugs.

Whether you’re craving a warm breakfast or a sweet dessert, Waffle Love has something for you.

Located at 2082 Gottingen St., the cozy spot offers local sausages, pierogies made in house, a selection of teas and coffee, and—of course—fresh waffles.

“Waffles are fun,” Benko said. “[They’re] basic, and then you can play with the toppings. And who doesn’t like dessert, really?”

With large portions and a mix of sweet and savoury options, “as long as people are hungry, they can get pretty much anything,” Webb said.

The pair said their most popular menu item seems to change depending on who comes in.

“We do like a breakfast waffle, we call it the ‘most day brekkie,’—it used to be called the ‘all day brekkie,’ but we sell out pretty much every day,” Webb said.

Benko and Webb were inspired to open Waffle Love out of a passion for food.

“We pooled our twelve-hundred dollars together thinking that would be enough, and then learned fast,” Benko said. “We’ve grown from there.”

Previously located in the Hydrostone, Benko and Webb were forced to find a new location when the building they were in was sold. Their new space is larger, with more seating options and room to breathe.

“We were tripping over ourselves before, it was so small,” Webb said.

“We still run out of space here on weekends sometimes,” Benko added.

They’ve seen some regulars follow them from their old location, while their new proximity to the harbour attracts tourists during the warmer months.

“Our customers are older people, younger people, kids coming in on their own—we get everybody,” Benko said.

Benko, who previously worked in the food service industry for eight years, said she loves making her customers happy.

“My favourite thing is when a waffle comes out, and someone...just sees it and they smile,” Benko said.

“Just as long as we please people, that’s all we really care about,” Webb agreed.