Located at 2015 Gottingen Street in the basement of the Propeller Brewing Company, the arcade is a cozy space filled with the flashing lights and digital sound effects of the games
Nov 27, 2019 1:44 PM By: Nicole Bayes-Fleming 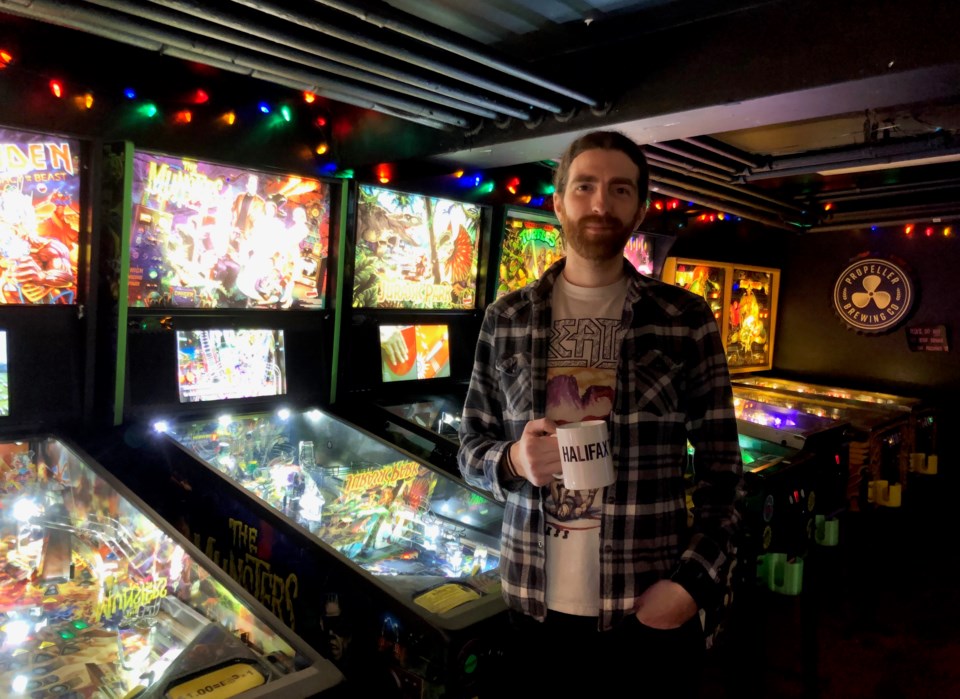 Ian Matheson, manager of Propeller Arcade, with his HalifaxToday.ca mug.

Whether it’s a vintage pinball machine or one of the newest arcade games, Propeller Arcade has something for every kind of player.

“This is a place for everybody,” said Ian Matheson, manager of the arcade. “There’s not one person that’s not welcome.”

Located at 2015 Gottingen Street in the basement of the Propeller Brewing Company, the arcade is a cozy space filled with the flashing lights and digital sound effects of the games. Prices range between twenty-five cents to a dollar for each machine.

“It’s nice for people to go out to a bar and get a lot of mileage out of a single quarter, which is kind of unheard of now,” Matheson said.

Many people who visit the arcade are quickly hit with a feeling of childhood nostalgia, he said.

“With Terminator 2, a lot of people come in and are like, ‘Oh my god I remember that,’ because for that certain age bracket it was in every mall, every arcade,” he said.

However for every long-time gamer that comes in, there’s always someone with no idea how to play any of the games who is learning for the first time.

“It happens all the time and I love it,” he said. “People play pinball, and the only thing some people know is to not let it drain. But over time, they learn these crazy deep rule sheets to these games, and they come back.”

He said watching people become invested in the games and develop friendships over them is one of the most rewarding aspects of working in the arcade.

“I get so many people tell me they bonded with somebody over Space Invaders in a way that never bonded before,” he said. “That blows my mind because that’s easily the most classic thing in here, and it’s still doing what it did in like, 1978.”

That level of camaraderie has helped establish a community of regular players at the arcade.

“Over the past year we’ve acquired a lot of regulars that I’m proud to call my friends now,” he said. “It just keeps building.”

Matheson said he’s always been interested in arcade games. Once he realized how many people shared his hobby, he got the idea of opening an arcade of his own.

“It was a passion of mine anyway,” he said. “I remember them from when I was a kid, so it was a huge thing for me...and then I started to discover a community around it and it kind of grew from there.”

Along with the games, the arcade offers a full bar offering cider, non-alcoholic drinks, and of course, pints of Propeller beer. While patrons must be legal drinking age to enter the arcade, Matheson said they do occasionally have all-ages days to offer families and young people a chance to play.