On the last Thursday of every month, the salon offers 'karma cuts,' providing a wash, cut and style for forty dollars. The entire fee is then donated to a local charity.
Mar 14, 2018 12:45 PM By: Nicole Bayes-Fleming 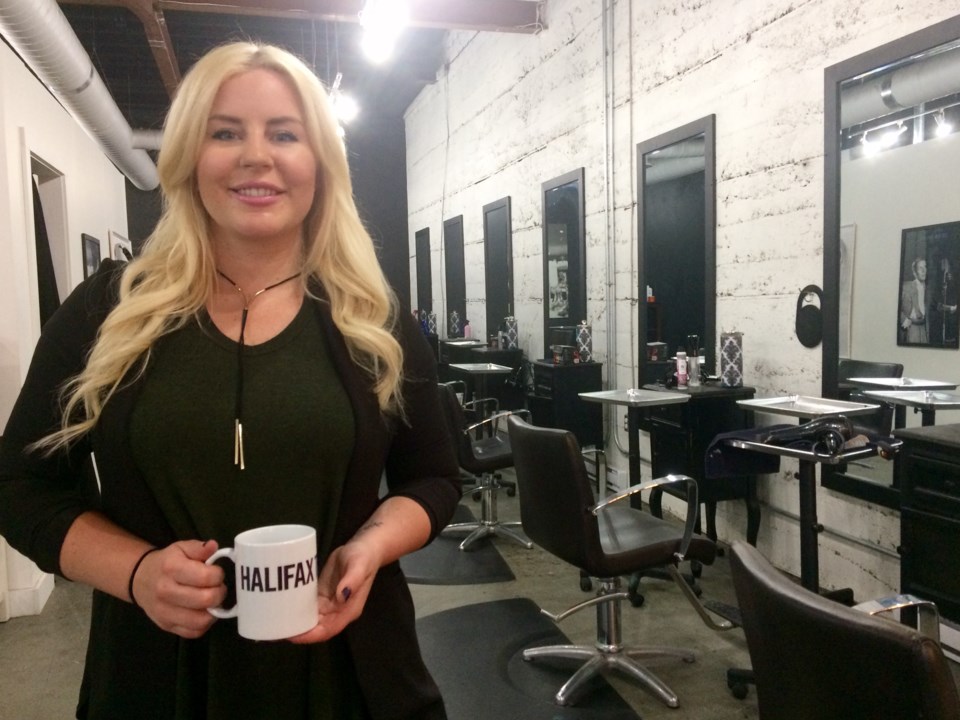 Meg Ryan, owner of Bowtique Hair and Makeup, with a Halifax Today mug.

The spacious salon, located at 1861 Granville St., provides make-up application and micro-blading for eyebrows along with haircuts, colouring and extensions.

On the last Thursday of every month, the salon also offers “karma cuts,” providing a wash, cut and style for forty dollars. The entire fee is then donated to a local charity.

Ryan said the stylists take turns each month to donate their time and provide the haircuts. The stylist who does the karma cut for that month also selects which charity gets the donations.

“Usually they pick something that’s close to their heart… a lot of us here love animals, so we do a lot with Bide Awhile and the SPCA,” Ryan said.

Previous charities the salon has donated to include Shelter Nova Scotia, the Avalon Sexual Assault Centre and the Huntington Society of Canada.

The salon introduced karma cuts in 2013 as a way to offer something unique for clients while also giving back to the community. Ryan said the karma cuts attract an equal mix of new clients and familiar faces.

“Sometimes they’re our regulars, and sometimes they’re just people who hear about it, and feel like they want to do good too,” Ryan said. “I mean, why not get your hair done and feel good, and [know] it’s all going to charity? Just a feel-good thing all around.”

Karma cuts are available by appointment only and must be paid in cash. Ryan estimated the salon raises between $400 to $600 each month.

Along with karma cuts, Ryan said the salon tries to help out the community in other ways. She said if a client comes in to donate their hair, the salon will provide the service of mailing it to organizations such as Locks of Love, which provides wigs for children in Canada.

In addition, Ryan decorates the salon by hanging pieces by local artists on the walls in order to give creators a chance to showcase and sell their work.

“We just want to give back to the community as much as we can [and] help those starving artists out there—we’ve all been there,” she said.

Ryan, who is also the co-owner of The Hills Bowtique in Dartmouth, said one of her favourite things about owning her own salon is being able to make people feel good about themselves.

“Just being able to create and make people feel their best is … very rewarding, usually you’re the favourite part of somebody’s day, and it always makes you feel nice to see people leave with big smiles on their faces,” she said.