The COVID-19 pandemic is just one of many challenges Katherine Hosker faces with her new cafe
Nov 5, 2020 4:48 PM By: Chris Stoodley 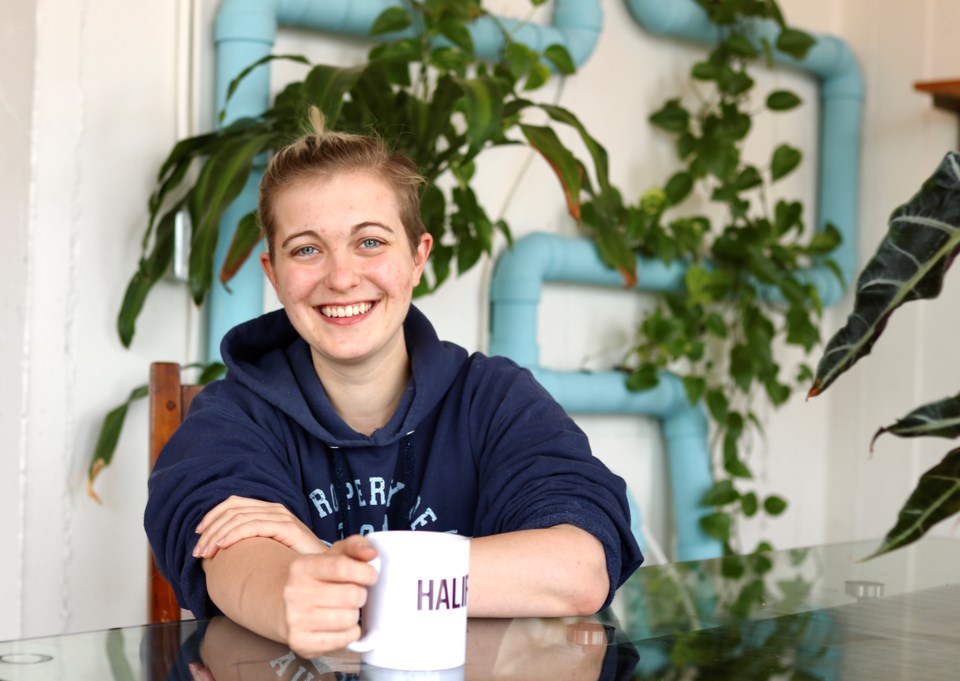 It’s located on the corner of Cogswell and Brunswick streets in downtown Halifax, and Hosker hopes for the space to be a place for students to study, Haligonians to go on dates and people to grab a cup of coffee.

But the pandemic hasn’t been easy for Hosker and Little Eden. Like many businesses, Little Eden has seen much less traffic and revenue.

“Basically, right before tourism season starts, the province locks down and we don't have any tourists come in during the summer,” Hosker said. "And yes, opening the [Atlantic] bubble helped, but for the most part, it’s not at a sustainable level at all.”

Since Little Eden only opened right before the pandemic began in Nova Scotia, Hosker can’t prove she lost any business.

“All of the government assistance requires you to show that you’ve lost business,” she said. “But because I was so new, I’ve only gained business."

“I qualify for nothing.”

Hosker’s passion for baking started when she was eight-years-old. Born and raised in Alberta, she was visiting Halifax that year for a family reunion. Her aunt owned a cookie business in the city and one day brought Hosker with her to work. As soon as Hosker walked into the large commercial kitchen, she instantly knew what she wanted to do with her life.

Around six years ago, she moved to Halifax. Her original plan was to live in the city for one summer in a cheap sublet apartment, then move to New York City to pursue her baking passions.

But over that summer, she fell in love with Halifax. She still went to New York City for three days to look for work, but ended up hating the experience.

On her second day, she had just finished speaking to someone when she had a realization.

She moved back to Halifax, signed a one-year lease and decided to try out living in the city for a year.

She’s been in Halifax ever since.

Over the years, she’s used her food industry talents at various establishments around the city. She worked with RCR Hospitality Group; helped open businesses like Shuck Seafood + Raw Bar and Grounded Coffee Bar; did some baking and pastry design for East of Grafton when it first opened; and worked at Gahan House when it was located on the Halifax Waterfront.

Then, Hosker joined the Centre for Entrepreneurship Education and Development and opened Little Eden. 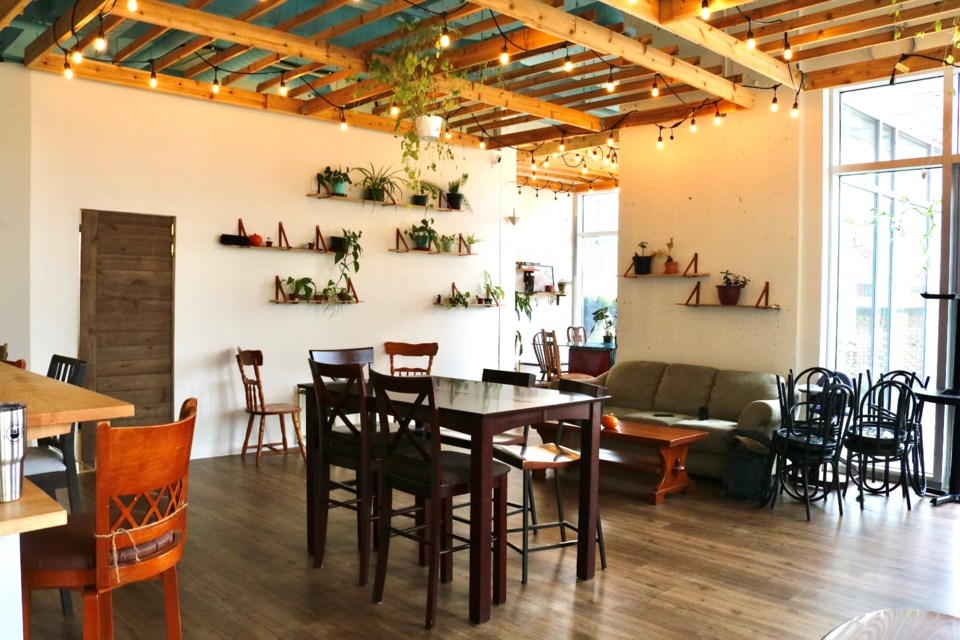 While it’s been a rough beginning due to the pandemic, Hosker has some support that’s helped her get through a difficult year.

She’s able to keep Little Eden open because of financial support from her parents. Her landlords have also been helpful by not chasing her for rent and discussing reducing how much rent she pays.

Still, it’s not all free handouts. She says she works 70 hours a week and only has a couple of staff members — who she wishes to pay more, give more hours to and hire more of — to help run Little Eden.

“The lack of traffic in the city is literally killing me, but I don’t qualify for any of the assistance to help me not die.”

While Hosker currently finds it difficult to make a profit at Little Eden, she ensures many elements of the business are environmentally-friendly and sustainable — even if it’s slightly more expensive.

For instance, nearly everything in the café is second-hand or made from reclaimed material. Items like takeout containers, packaging and parchment liners are compostable or reusable. She also uses LED light bulbs and has an efficient oven.

On top of environmentalism, Hosker makes it a point to source most of the ingredients and products she needs from Nova Scotia or Atlantic Canada. For instance, she uses coffee that’s roasted in Wolfville and she’ll get tea from World Tea House on Argyle Street. Anything she gets from outside of Canada is fair-trade.

“We’re intentional about where we’re getting our products,” she said. “And that means we waste very little, that means we contribute far less to our carbon footprint.”

Hosker’s push for environmentalism and sustainability comes from her own personal life. For one, she tries her best to use less plastic in her everyday life.

Moreover, she’s worked in the food industry all her life and said the amount of packaging waste the industry makes is “absolutely obscene.” She also said there’s a lot of food waste from customers who don’t finish their meals.

With many businesses in the food industry focusing on making a profit, Hosker said it’s slightly difficult to incorporate environmentally-friendly products when profit margins are already so slim in the industry.

For other local businesses to be more environmentally-friendly and sustainable, Hosker says “it’s not as daunting and hard as it seems.”

One sustainable program Hosker offers at Little Eden is a rental travel mug system. Customers can rent a travel mug for $2, keep and reuse it for as long as they want, return it when they’re finished and then receive their money back. People can also purchase the mugs if they desire, which Hosker said has so far made up for the cost of the other mugs.

Currently, Hosker said there’s around 100 in circulation with another 30 ready to be rented. And while the program is based on good faith, she said there are enough people using the program and buying the mugs that she doesn’t have to increase the rental charge. 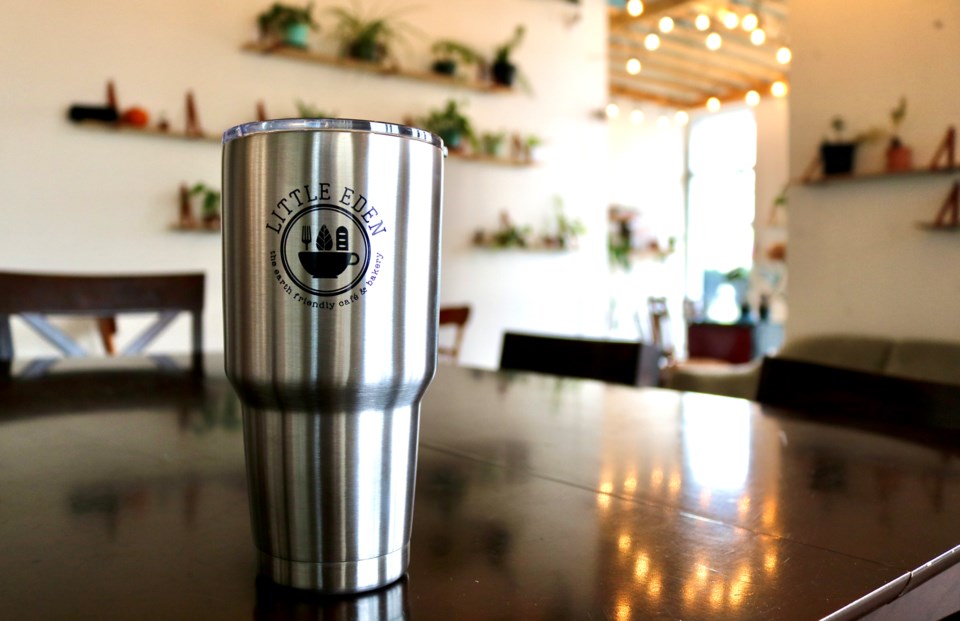 Hosker wasn’t the first in Canada to create a rental travel mug program. A few independent Ontario cafes have been doing something similar for a few months.

But that hasn't stopped larger corporations, such as Tim Hortons, from claiming its program is the “first of its kind in Canada.”

“I was livid that they were just like, ‘We’re the first ones in Canada to do this,’” Hosker said. “I was not well-pleased to read that because it took me a five-minute Google search to see if I was the only one doing it.

“I wish that when I looked up rental, reusable coffee cups that Tim Hortons and Starbucks were kind of leading that charge and that it wasn’t up to small businesses to be like, ‘Hey, we should do this thing.’ Because they have money to throw at the problem whereas we have to make a huge investment not knowing whether it will work or not.”

In Halifax, she said other business owners have expressed interest in the program but she said many of them will only consider creating a similar system when they’ve seen success.

“Is it something that you should do? Yeah, yeah it is,” she says. “But it’s a couple of small places that are doing the sustainability thing up against McDonald’s, Tim Hortons, Starbucks, etcetera.”

And for Little Eden, she hopes the business will grow even larger. Some of her ideas for the future include expanding the menu to include more vegan and keto options, offering a catering service and getting a liquor license for the cafe.

In September and October, she saw more customers coming to Little Eden. If that continues, she’ll be able to make it to next summer. If not, she doesn’t know what will happen to her cafe.