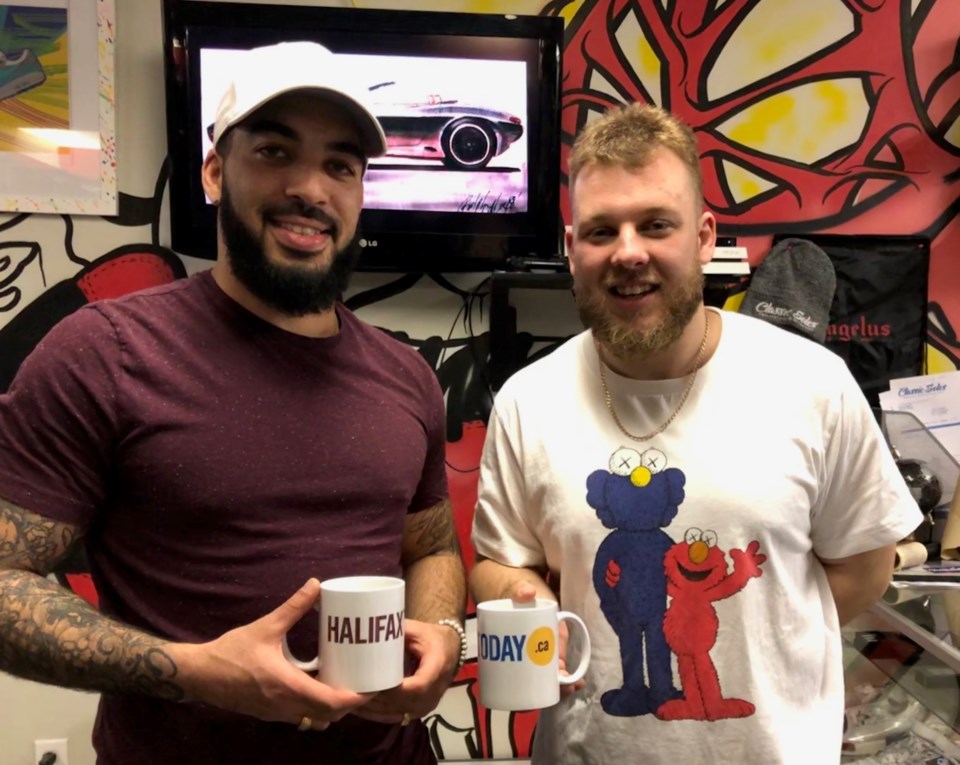 Tyrone Goodwin, left, and Jonny Connors with their HalifaxToday.ca mugs.

For Halifax locals who want to buy new shoes and have them taken care of too, look no further than 5687 West St. The cozy shop houses both Tyrone Goodwin, owner of Classic Soles, and Jonny Connors, owner of East Coast Kicks.

While the two men began their businesses independently of one another, the decision to work together was an easy one.

“It was kind of a no-brainer for us to come together,” Goodwin said. “We’re just like the bread and butter.”

At East Coast Kicks, Connors provides high-end sneakers and streetwear, focusing on limited items that don’t often reach the Maritimes. The most popular brands are Yeezys, Jordans, Supreme and Off-White.

“Almost everything that I bring in is imported, because we don’t have retail stores for those kind of shoes,” Connors said. “So I want to bring those kinds of shoes here for people.”

The store is also “huge on local,” Goodwin said, carrying brands such as 902 Lit and Chasin Commas. While it mostly offers men’s products, Connors said he’s trying to expand more into women’s.

Along with new items, the store also offers a consignment service, which takes advantage of having the two businesses in one location.

“People bring the shoes in to get cleaned, then they bring them to me to sell, once they sell they buy new shoes, get those cleaned—it’s a constant circle,” Connors said.

With Classic Soles, Goodwin offers premium sneaker cleaning and maintenance, along with custom design. Cleaning can be done on any and all shoes, Goodwin said, not just ones purchased in-store.

Those interested in having shoes custom-designed can bring in a blank pair of shoes and have them painted in any design they wish. Goodwin said the requests always vary.

“It’s so broad range, it’s crazy,” he said. “Anywhere from a portrait of Marilyn Monroe to Gucci shoes, to roses, memorial for rap artists or music artists, anything.”

Goodwin and Connors are committed to giving back to the community when they can. They are currently running a shoe drive, collecting pairs of shoes to give out to shelters, charities and people living on the street. Donations can be made until May 31st.

“Every pair that’s donated, we wipe them all down and sort them,” Connors said.

For the two men, who both previously worked in trades, the store is a passion project.

“I’ve always been interested in shoes,” Connors said. “I have a personal collection that’s quite big.”

“I’m not as much of a sneakerhead as Jonny,” Goodwin joked. “I always liked shoes, but my main thing was I cleaned my shoes myself. So it came from something I do on a day-to-day basis, into a profitable business.”

Both agree they wouldn’t want to be doing anything else.

“There’s not a single day we come into the shop being like, ‘Aw, I got to go to work,’ ” Goodwin said.

“We get to come in here every day and hang out together, and hang out with the people that come into the shop,” Connors added. “So that’s one of the best blessings about all of this.”