Chkn Chop is back in action

Located at 6041 North St., the restaurant is back up on its feet and once again serving its signature rotisserie chicken
Nov 6, 2019 1:44 PM By: Nicole Bayes-Fleming 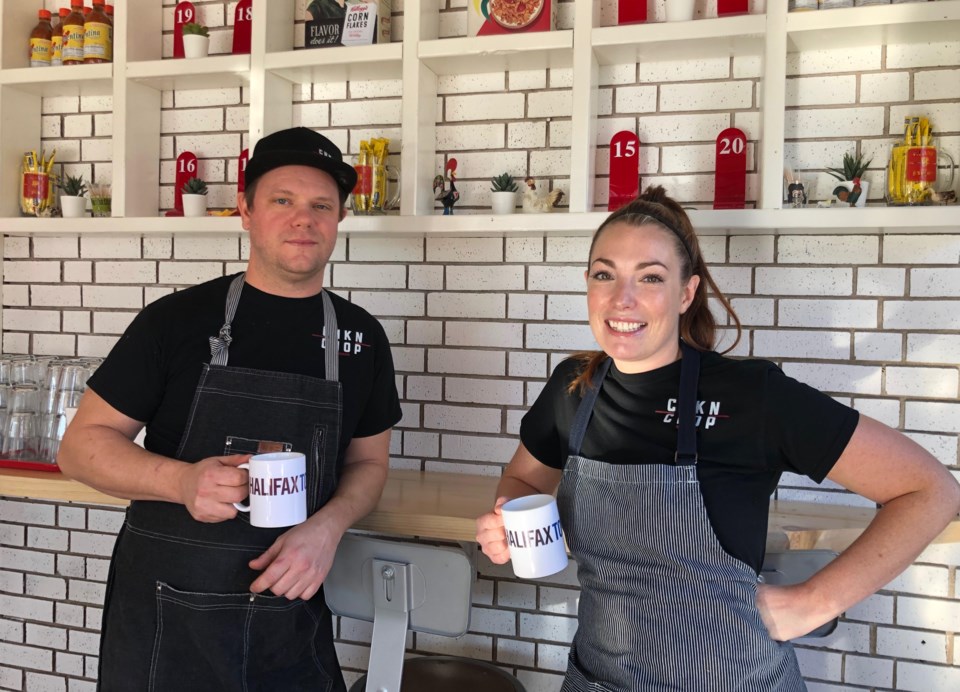 Halifax chicken lovers can rejoice—Chkn Chop, located at 6041 North St., is back up on its feet and once again serving its signature rotisserie chicken.

Jenna Mooers, who owns the restaurant with her partner Andrew Flood, is this week’s midweek mugging recipient.

“Our inspiration behind it was that it’s food that we like to eat,” Mooers said. “It’s quick, and easy and healthy.”

After initially opening in the fall of 2017, Chkn Chop closed for seven months following a fire that occurred in the restaurant's laundry dryer after rags combusted. While the fire itself was contained quickly, the smoke damage was so extensive it required the entire restaurant to be gutted, Mooers said.

“It was kind of an ironic thing that happened, because we cook all of our chicken over charcoal, so all we do all day is fire,” she said.

With all but one member of the original staff returning, Mooers and her team are excited to once again be offering the dishes so many locals crave. Customers can choose between a quarter, half, or whole chicken, with a variety of sides including french fries, roasted potatoes, green beans and corn on the cob.

“Our Brussels sprouts, believe it or not, are our number-one selling side,” Mooers said. “They’re deep fried, tossed in lemon oil, then topped with parmesan cheese, and they've become kind of cult following. We’re converting people to Brussels sprouts.”

The store’s most popular dish is its fried chicken sandwich, which comes in a different featured flavour each week.

“The sandwiches are definitely the highlight of our menu,” Mooers said. “For example, this week was an Indian butter chicken. Last week, we did a buffalo spice one with blue cheese.”

Chkn Chop offers both eat in and take out service, and Mooers said the restaurant sees an even mix of both customers. She said they are particularly popular with families, due to their quick service and the universality of their menu.

“There’s just not many other options like this in Halifax,” she said. “Our order times are typically under 10 minutes, so you can come in after work, pick up a meal for your family, and be home with a rotisserie chicken and quality vegetables on the table.”

Mooers, who also owns the restaurant Edna, has been working in restaurants for her entire life. She said one of the best things about coming into work each day is the social aspect of the job.

“I really like the pace, I love working as part of a team,” Mooers said. “During the time we were closed from the fire, I really missed the social need that this restaurant was fulfilling for me. Not just with staff, but with the customers.”

One things for sure, Mooers said—owning her own restaurant is never a dull moment.

"It's a pretty small space and it gets very packed in here, and that just adds to the atmosphere of it," she said.