The secret to Cindy Wheatley's authentic southern-syle barbeque is the smoker
Jun 12, 2019 1:44 PM By: Nicole Bayes-Fleming 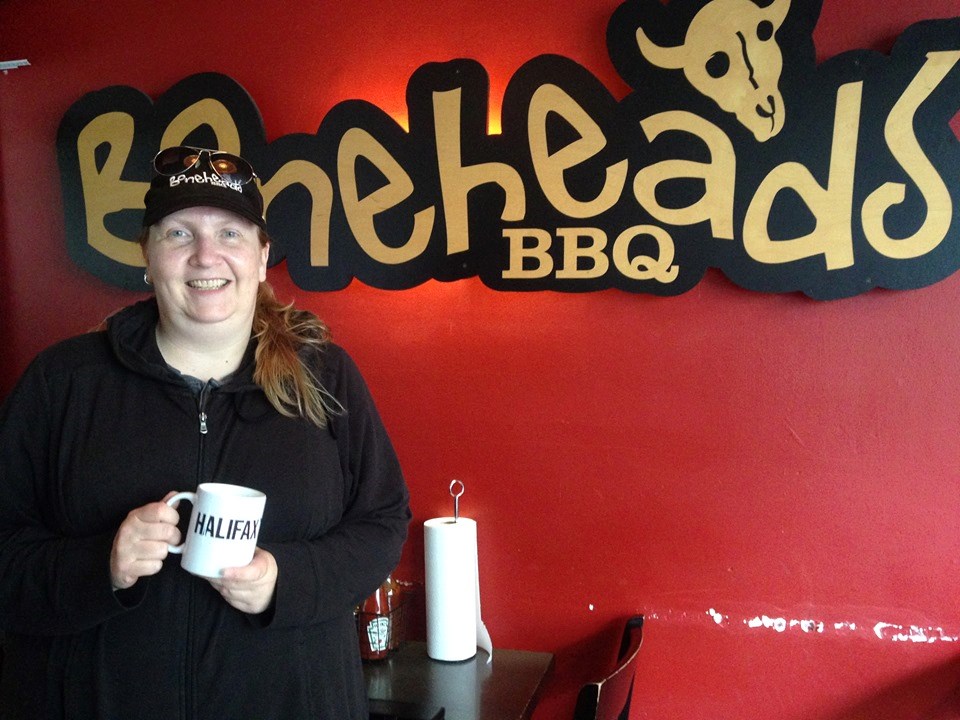 Cindy Wheatley, owner of Boneheads BBQ, with her HalifaxToday.ca mug.

For nearly 10 years, Boneheads BBQ has been offering a taste of southern cooking on the east coast.

“I definitely think it’s comfort food,” said Cindy Wheatley, owner of Boneheads. “It’s just so smokey, and you get a good selection, you get to pick your sides and it’s just a little bit different from other places.”

Located at 1014 Barrington St., Boneheads provides classic barbeque dishes such as ribs, brisket, and pulled pork along, with the more inventive, like barbeque poutine.

Wheatley is this week’s midweek mugging recipient. She said she first became interested in barbecuing long before opening her own restaurant, and would often spend her free time barbequing in her backyard.

“I had done a lot of travelling when I was younger, my mother and I travelled all around the United States, and I think that’s probably where I first took an interest in it,” she said.

When she eventually decided to open a restaurant of her own, she realized barbeque would add something new to the city.

The secret to her authentic southern-syle barbeque is the smoker.

“It’s all wood smoked,” she said. “We don’t use any electricity or propane, or anything.”

It’s a dedicated process that can take anywhere from up to 14 hours or more, she said.

“All of our bigger meats have to go in overnight...and then chicken, ribs and sausages we do every morning for that day,” she said.

The store works with local vendors as much as possible, particularly with fresh meats that are brought in five times a week. Her goal each day is to sell out, so all items are made fresh daily.

She said the most popular dish is the pulled pork, followed by the ribs.

“Chicken wings are good too, they’re a little bit different,” she said. “We don’t fry them, so they’re dry-rubbed and smoked.”

Those who want to try their hands at barbequing at home can now purchase Boneheads barbeque sauce, which they recently began bottling. Three different flavours are available

Boneheads also offers catering for parties, business events and even weddings. Those interested can contact the store online.

Wheatley, who previously worked in other restaurants before opening her own, said the independence is one of her favourite aspects of owning her own business.

She said it’s this freedom to try new things, along with the work of her long-time staff, that keep people coming back for more.

“You get your food fast, but it’s not fast food—it’s literally the opposite, since it takes so long to cook everything,” she said.