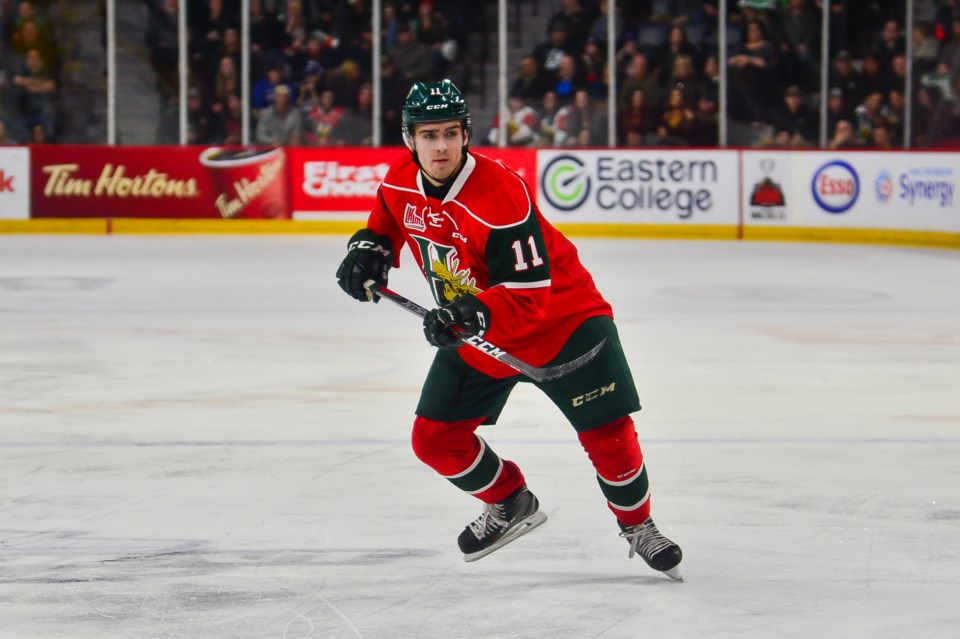 That Czech-born Filip Zadina only knows three words of French but that hasn’t prevented him from getting excited about the possibility of being selected by bilingual Montreal or Ottawa at the NHL Draft later this month.

“Literally none. I can say, Je m’appelle Filip. But that’s it. Merci,” Zadina said Monday, when a small group of the league hosted a handful of draft’s top prospects at Game 4 of the Stanley Cup Final. “If I ended up there, I would need to learn the French language.”

Zadina, 18, lit up the QMJHL in 2017-18, his first season on North American ice, scoring 44 goals and 38 assists in 57 games for the Halifax Mooseheads, topping all rookies in points. He was named to the First All-Star Team and won the Mike Bossy Trophy as the best professional prospect in the Q.

Scouts describe the son of Marek Zadina, a retired pro who now serves as an assistant coach in the Czech’s top domestic league, as a natural scorer blessed with finish.

In other words, the type of winger goal-hungry high-drafting clubs like the Canadiens (third pick) and Senators (fourth) should consider.

“It will be good if either Montreal or Ottawa,” Zadina said. “They’re nice cities. Montreal, I know very well. I’ve been to the city many times and the fans are awesome. But they’re looking for a centre or a D.

“Ottawa, I’ve been to there when we played in Gatineau. It’s the capital of Canada, so it would mean a lot to play there.”

Zadina finds himself in cluster of skilled forwards expected to get scooped up in the top five. Once Buffalo claims its prized Swedish defenceman, Rasmus Dahlin, No. 1 overall, the Carolina Hurricanes will be on the clock.

“I know Carolina very well, because I know [Hurricanes 2017 first-rounder] Martin Necas. I would love to play with him. But I will not say it’s going to happen,” Zadina said.

The smart money is on Andrei Svechnikov being drafted second overall to Carolina, but Zadina doesn’t want to handicap the race between himself, Svechnikov, and American Brady Tkachuk, the three most prized scoring wingers on the board.

“Me and Svechnikov played in the CHL, but Brady played in college, so it’s hard to compare,” Zadina said. “We’re going to be surprised by what team picks us and where.”

If Zadina’s statement that Montreal is eyeing a defenceman or centre holds true, one of the three may slip out of the top five.

One thing is certain: Zadina is much too gifted and hyped to be lingering around by the time Chicago is on the clock at eight.

“The Blackhawks were my favourite team. When I was growing up, I was watching when they were winning the Cup. That was an unbelievable feeling,” Zadina said.

“[Patrick] Kane’s my favourite player. I love his hands and the way he’s playing. He’s a very skilled player. He has such a feeling for scoring the goals. I’m trying to follow him and learn something.”