'You're judged by the friends you keep': PPC tries to distance themselves from anti-immigration billboard

A billboard featuring People's Party of Canada leader Maxime Bernier appeared on the Bedford Highway on Friday morning
0
Aug 24, 2019 11:21 AM By: Victoria Walton 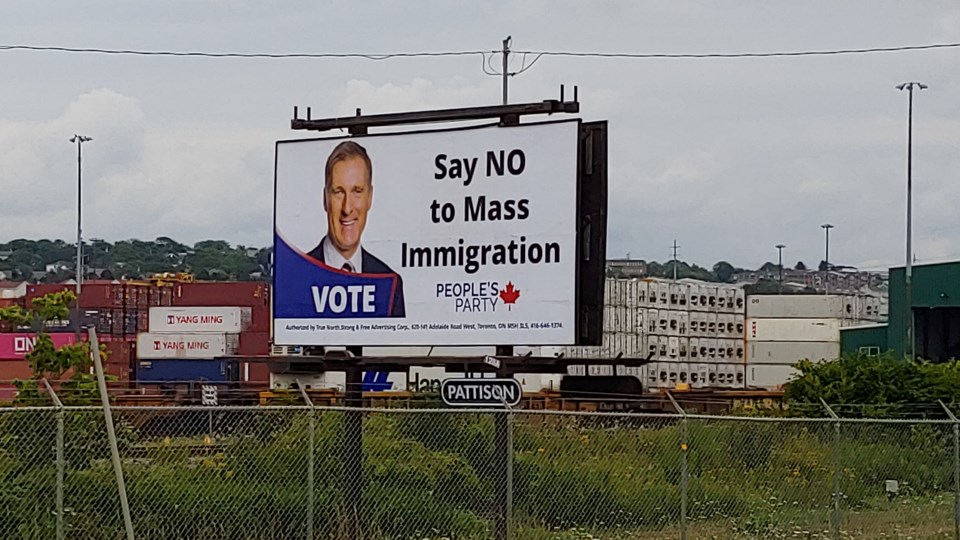 After backlash on social media and in the press, the PPC confirmed that they have nothing to do with the billboard.

But despite the lack of official affiliation, some political strategists think that the PPC could take a hit because of this.

"You're judged by the friends you keep," says Tim Powers, Vice-Chairman of Summa Strategies in Halifax.

The strategist tells NEWS 95.7's The Todd Veinotte Show that it shows the true colours of people who may support the PPC.

"When their supporters are people who want to support and put up this stuff, it really exposes that party for what it's worth," he explains.

Powers thinks that the message on the billboard, "Say no to mass immigration," doesn't resonate well with Haligonians.

Throughout the 19th and 20th centuries, Halifax's Pier 21 was an immigration port for almost one million immigrants to Canada.

"With Halifax's history of Pier 21, [either] somebody doesn't know their history or they're clueless," Powers says. "Then again, maybe that tells you all you need to know about the People's Party of Canada if you were thinking about voting for them."

On the East Coast especially, Powers reinforces that we need immigration now more than ever.

Powers says polls conducted by his company, Abacus Data, is conducting polling to see how people feel about the word "immigration."

"It's become such a loaded, politically weaponized word to express people's anxieties around the economy, their fear of change," he says.

"Anybody who's doing any advertising knows that using the word immigration and the phrase mass immigration is like waving a red flag because of the way it's been adapted in the vernacular for negative purposes."

But Powers has been happy to see the reaction of Haligonians to the advertisement.

"I think the reaction again that a lot of Nova Scotians are having to this sign is a good one," he says. "Their message is just intolerant and good for people for calling it out."

Third party behind Bedford Highway billboard promoting Bernier's anti-mass immigration stance
Aug 23, 2019 4:57 PM
Comments
We welcome your feedback and encourage you to share your thoughts on this story. We ask that you be respectful of others and their points of view, refrain from personal attacks and stay on topic. To learn about our commenting policies and how we moderate, please read our Community Guidelines.