Many grave markers at the Gate of Heaven cemetery and Mount Olivet graveyard 'have fallen over as the result of the terrible weather,' says the Archdiocese
Mar 15, 2018 9:40 AM By: Michael Lightstone 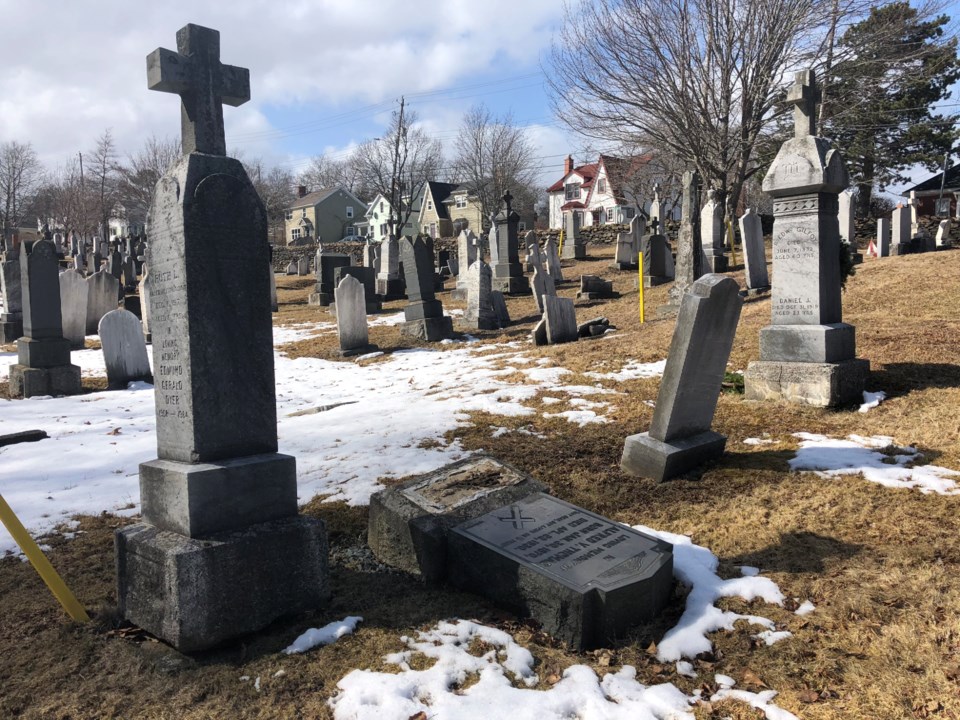 Staff at two Roman Catholic cemeteries in the Halifax region have been dealing with the dislodging of hundreds of headstones the Archdiocese of Halifax-Yarmouth says is due to winter weather.

A notice the Archdiocese has posted online says many grave markers at the Gate of Heaven cemetery in Lower Sackville and Mount Olivet graveyard on Mumford Road “have fallen over as the result of the terrible weather that has included strong winds and the freezing and thawing of the ground.”

Workers at the cemeteries are making repairs; the notice urges relatives of the deceased not to try to correct the heavy, fallen headstones by re-securing them to their bases.

The warning, according to the Archdiocese, is because of safety reasons. Headstone repairs are to be finished this spring, the notice says.

A spokeswoman said Wednesday about 300 granite headstones have been affected by the elements, most of which are situated in the Gate of Heaven cemetery.

Workers tackle the fallen headstone situation methodically, by going through a graveyard section by section.

Driscoll-Cainen acknowledged families attempting to place headstones back in their proper places is a concern. “People could get hurt very badly if a stone falls on them,” she said.

Asked if some toppled headstones could have been shoved by vandals, Driscoll-Cainen said grave markers usually break if they’ve been targeted by people causing such damage.

Cemetery upkeep and repairs are crucial because a “Catholic cemetery is a sacred place,” the Archdiocese’s website says. “It is holy ground where our faithful departed await the resurrection to eternal life.”

Driscoll-Cainen said the cost of getting the headstones back where they should be – staff wages and materials – is covered by Catholic Cemeteries of Halifax. She didn’t have an estimate.

“If we can put the stone upright again, and secure it, we will not contact the family to pay for that,” said Driscoll-Cainen.

Early last year, Halifax Regional Police investigated vandalism at the Mount Olivet site. People had knocked over and broken several headstones at the cemetery, which contains the graves of Catholic victims of the 1912 Titanic disaster and 1917 Halifax Explosion.

Driscoll-Cainen said at least two headstones for victims of the First World War-era explosion were dislodged by weather sometime this winter. Titanic markers aren’t vulnerable to toppling, she said, because they are flat on the ground.