The Halifax Cycling Coalition wants you to ride your bike, even in the dead of winter
0
Feb 15, 2020 3:57 PM By: Victoria Walton 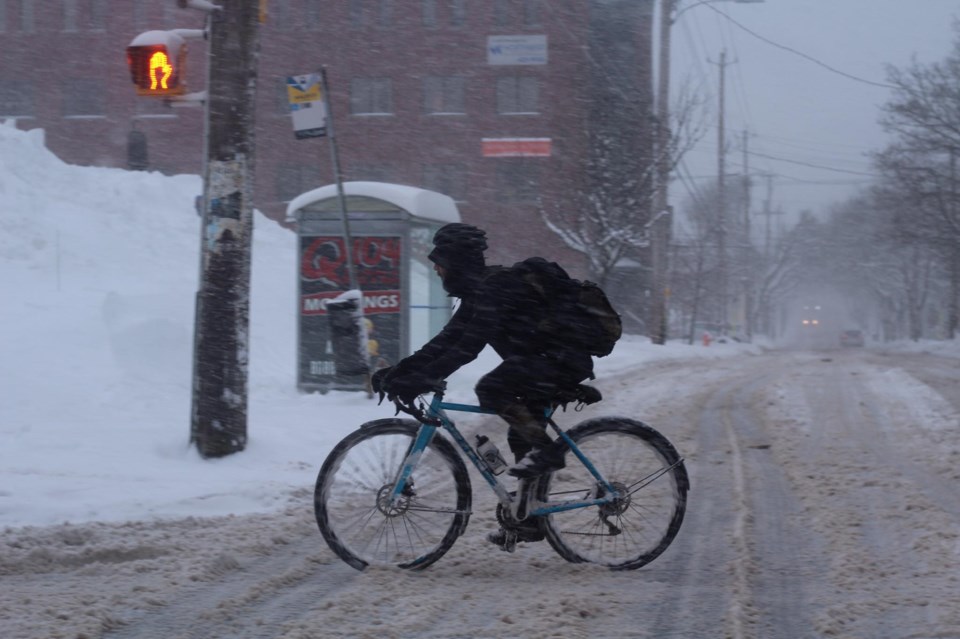 A cyclist makes their way up Windsor St. during a snowstorm on January 8 2020. (Victoria Walton/HalifaxToday)

The Halifax Cycling Coalition wants you to ride your bike, even in the dead of winter.

"I always find personally that I'm a little bit less enthusiastic in the winter, and so cycling has been a really big help for me," says Executive Director Meghan Doucette.

The Halifax Cycling Coalition (HCC), which advocates for more cycling infrastructure, says winter cycling can help get you outdoors and exercising without even trying.

"It gets you outside in the fresh air and it's much like cycling in any other season, it builds that activity into your day without you really having to think about it," Doucette tells NEWS 95.7. "If you're biking to work every morning or biking to school or biking to do your errands, you don't even really have to think about doing that exercise, you're already doing it just to get where you need to go."

Throughout the week, the HCC has held several events including a course on how to stay safe when biking in the winter.

"There are absolutely precautions that folks should take if they're thinking about starting to ride in the winter and they haven't tried it yet," says Doucette.

One of these is investing in a good set of lights and reflectors, which are legally required by the provincial Traffic Safety Act.

"Having really good quality lights is important because it is dark for so much more of the time, and often during the evening commute if not the morning commute as well, it's going to take place in the dark," she adds.

Doucette says people who want to commute by bike every day in the winter may want to upgrade to a bike with studded tires, or wider tires that can glide across snow and ice.

"Some people who want to make sure they're able to commute every day no matter what the weather, they'll opt for something like a studded bike tire," she explains. "So that will make sure that they have grip in the ice and things like that."

But for herself, Doucette says she mainly sticks to cycling on days that the roads are clear.

I don't have those kinds of tires, so I do kind of pick my days and just go from there. But I guess no matter what it's important to have warm clothes," she adds.

The executive director of the HCC also says that as Halifax's cycling infrastructure improves, it will lead to more people biking all year long.

"On South Park Street, the new bike lane that went in in September is a fully protected bike lane and it is plowed throughout the winter," she says.

Even with protected lanes though, Doucette thinks its important that cyclists drive to conditions in the winter, just like cars do.

"If it is icy or snowy you would definitely want to be going more slowly and especially around corners and that kind of gives you that ability to not skid out or slip," she says.

But being on a bike does give cyclists the advantage of being close to the pavement to assess where they can drive, and where they can't.

"One thing that's great about being on a bike actually is that you're a little bit closer to the road so you can see the pavement better than if you were driving in a car. So you can have a pretty good sense of the actual conditions," Doucette adds.

Tonight, Winter Bike Week will wrap up with a screening of the Dutch film Why We Cycle.

"It's about the cycling culture in the Netherlands and how it's been so ingrained in a part of every day life," says Doucette. "It's an interesting model to look at for other places."