Halifax now under hurricane warning, along with a rainfall warning as Dorian approaches (update)

Canadian Hurricane Centre's 3 p.m. track has Dorian hitting either near or just east of Halifax
Sep 6, 2019 11:29 AM By: Meghan Groff 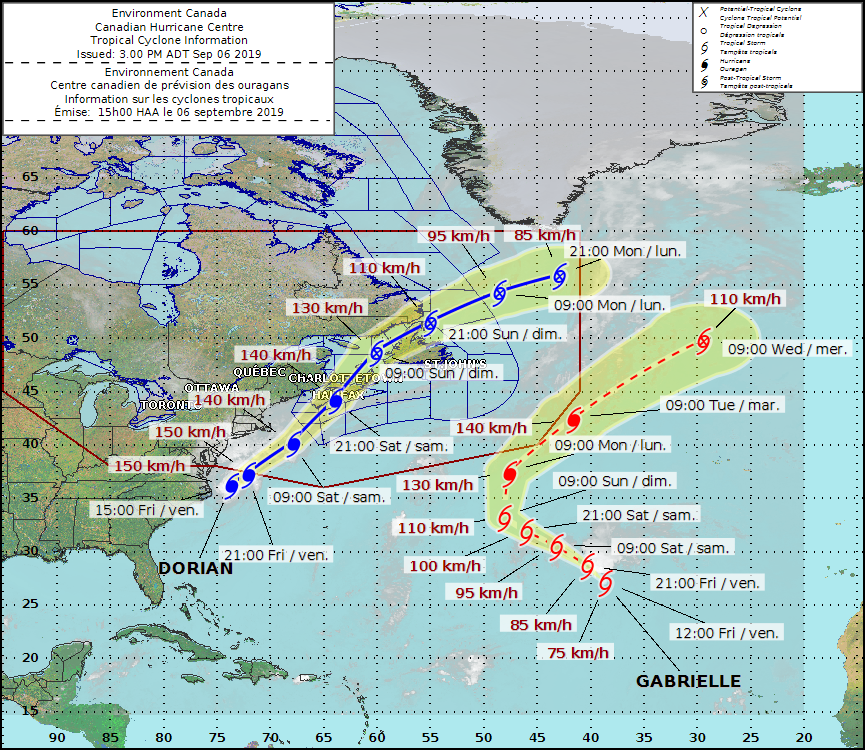 Halifax is now under a hurricane warning, along with a rainfall warning on Friday afternoon ahead of the arrival of Hurricane Dorian.

The latest track shows Dorian making landfall as a Category 1 hurricane, possibly near Halifax at around 9 p.m. Saturday.

The Canadian Hurricane Centre says to prepare for severe winds and torrential rain, along with large waves along the Atlantic coast.

The forecast for Halifax calls for rain to start falling before or near sunrise with winds strengthening throughout the day.

"Winds will increase throughout the day Saturday and will become severe by the evening," said the hurricane warning. "Wind gusts up to 150 km/h are now likely, especially along coastal areas."

The forecast for Halifax, updated Friday at 4 p.m., is calling for winds Saturday night of 70 km/h, with potential gusts of 120 km/h, which could reach 150 km/h along parts of the coast.

"We know what kind of impacts we get with winds of over 120 km/h this time of year with all the leaves on the trees," Robichaud said. "What we should expect are things like uprooted trees, broken trees, that may result in extended power outage. Those are all the things we know happen when we get these kinds of conditions."

Nova Scotians are being asked to prepare for power outages and to make sure they can be self-sufficient in their homes for 72-hours.

As of Friday afternoon, Robichaud explained Dorian could still shift 80 km in either direction of the current expected track. This means Dorian has the potential to make landfall anywhere between western Nova Scotia and Cape Breton, which would change up which areas would get more rain and which would get more wind.

"Anything to the left of the track, that's where the heaviest rain is going to fall," said Robichaud. "We're expecting 50 to 100 mm, with potentially reaching 150 mm in some localized areas."

Environment Canada warns rainfall rates could exceed 30 mm/h in the heaviest downpours, which could cause road washouts and localized flooding.

RCMP are asking Nova Scotians to avoid unnecessary travel during the storm and Halifax Transit will stop running at noon on Saturday.

Storm surge could also cause flooding along the Atlantic coast.

"Stay away from those waves," Robichaud said. "We do expect some fairly large waves to arrive along the Atlantic coast, probably late afternoon tomorrow, into the evening."

"Those conditions can be extremely dangerous and unfortunately we've lost a number of people that have been swept away by these waves over the years with just these types of storms."

Halifax Regional Municipality has identified coastal communities in the Sambro area, Peggys Cove, and along the Eastern Shore as "high-risk areas." Residents are being asked to voluntarily evacuate.

The municipality has set up three evacuation shelters at the Dartmouth East Community Centre, Canada Games Centre, and St. Margarets Centre. They will open at noon on Saturday.

Several events have already been cancelled or postponed due to Dorian.