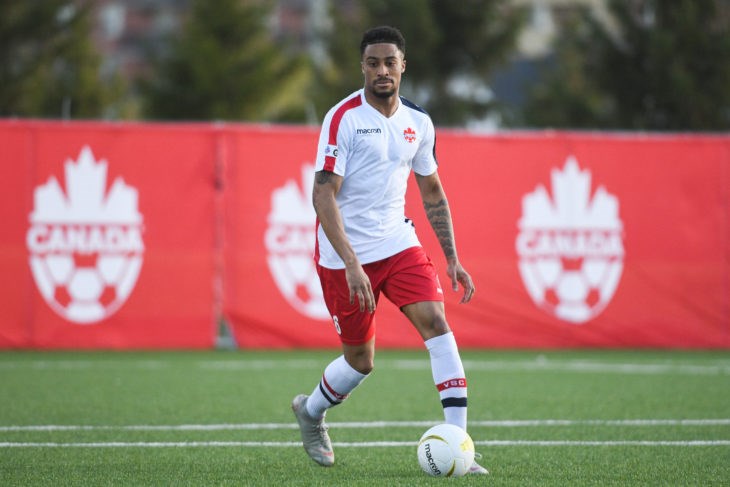 Duran Lee in action against the Wanderers in the Canadian Championship match in Vaughan, May 15. (Photo: Vaughan Soccer Club)

Lee is a left sided centre-back who comes from League1 Ontario team Vaughan.

The 24-year-old is originally from Toronto and signed onto the team on Tuesday.

🇨🇦 Duran is a left sided centre-back and is ready to help the Wanderers in anyway possible.

Lee was a part of the youth academy of Toronto FC, before moving on to play for Sigma FC for three seasons, but this is his first professional contract.

“It’s a fantastic feeling, you work hard for this every day and it’s finally come to fruition,” Lee said. “I want to be a part of the tradition and history of this club.”

The 6'2" player travelled to Halifax last summer, to play against the Wanderers here while on the Vaughan team.

Wanderers Head Coach Stephen Hart said he had a chance to check out Lee's skills on the field.

“Most of all, he was very consistent and I thought he dealt really well with containing Akeem Garcia,” Hart explained. “He was very aggressive in his defending. He reads the game well and he understands the position.”

Hart said the timing of the signing is important since a few players are still on the bench after last season.

“With Peter Schaale leaving and Chakib Hocine not getting back to full fitness and struggling with his injuries, we thought it was a position we needed to fill,” Hart said.

Lee said he’s excited to be moving to Halifax thanks to the support of the Wanderers strong fan base.

“From start to finish the fans in Halifax were amazing. All the players thought it was a true soccer stadium," he said.

The player will arrive in Halifax on Thursday to complete a medical for his new team.

NSHA starts to resume a number of patient procedures, programs and services
May 26, 2020 11:35 AM
Comments
We welcome your feedback and encourage you to share your thoughts. We ask that you be respectful of others and their points of view, refrain from personal attacks and stay on topic. To learn about our commenting policies and how we moderate, please read our Community Guidelines.