Ervin Olsen says the father of the blended family suffered smoke inhalation but has come out of an induced coma
Jan 9, 2018 4:04 PM By: Canadian Press 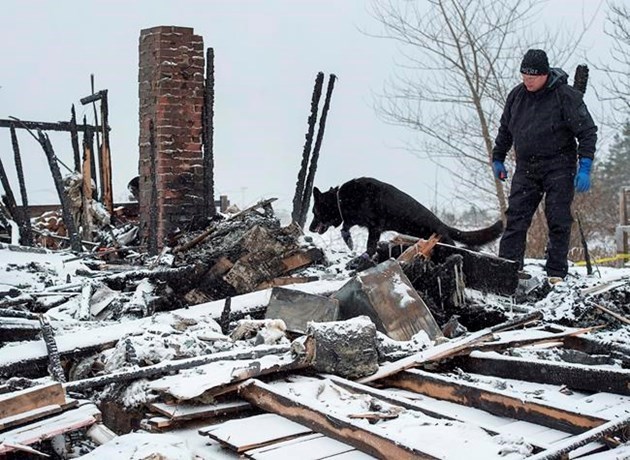 HALIFAX — A Nova Scotia man has been brought out of an induced coma, two days after a fast-moving house fire killed most of his young family, including a three-month-old baby, a relative says.

"He was in pretty rough shape," said Ervin Olsen of Yarmouth, N.S., the great-grandfather of two of the four youngsters killed in the blaze early Sunday in rural Pubnico Head.

The father, local fisherman Phil Prouty, came out of the coma late Monday and was speaking, but his prognosis remained unclear, Olsen said in an interview Tuesday.

His granddaughter, Emma Kennedy, has stayed by her common-law partner's side in a Yarmouth hospital, mourning the loss of their blended family and a cousin as he struggled to survive, he said.

"I think he had taken in a whole lot more smoke than my granddaughter," Olsen said. "I don't know whether he still needed assistance with his breathing. It's a hopeful sign, but that's about all we can say."

Kennedy appears to be in good health, though she remains distraught about her family's devastating loss, he said.

"She is not leaving him, and she is staying there all the time, until he gets better," he said. "That's all she has left. It's him."

A relative in Newfoundland who has launched a fundraising campaign for the family has said the victims ranged in age from an infant to a seven-year-old and included a cousin who was at the home for a sleepover.

Olsen identified his great-grandchildren as three-month-old Winston and four-year-old Jayla. He said he couldn't offer details about the two other children who died in the blaze, out of respect for the other families involved.

He said he last saw little Winston before Christmas.

"He was just a little guy and the father was crazy over him," he said. "When his father was laying in his room, struggling to be alive, there was this tiny camo jacket in a chair alongside of him ... a little boy's jacket."

As for Jayla, Olsen said the blonde-haired four-year-old was a remarkably mature little girl.

"She was a people person, even though she was a little kid," he said. "She seemed like she was beyond her age ... She was so lovable, so intelligent, so cute and so friendly. She would high-five you ... always with a smile."

Olsen recalled snapping a photo of the girl after she was told she couldn't dip her finger into the frosting of a cupcake.

"She came back in and was pouting a little bit," he said. "That's the picture I have of her."

Olsen praised the Canadian Red Cross for offering help to his extended family, and he said they were grateful for at least two local fundraising efforts.

One local lobster fisherman has offered to donate everything he earns when he goes out fishing Wednesday, Olsen said. "That guy is a bright light in a dark tunnel," he said.

"All of this encouragement seems to flow with healing in some ways. And I've passed this along to my granddaughter, who is overwhelmed with the loss ... but it does help her."

Police and the province's chief medical examiner have yet to release any details about the victims' identities.

Chief medical examiner Matt Bowes issued a statement Tuesday saying his office has finished its work at the scene of the fire, which was searched by an RCMP cadaver dog on Monday. Bowes said the next steps include autopsies and other scientific work related to identification.

"The results will be shared directly with the families, RCMP and Office of the Fire Marshal," Bowes said.

The cause of the fire remains under investigation, but the RCMP have ruled out foul play. The Medical Examiner Service is now leading the investigation.

West Pubnico Fire Chief Gordon Amiro has said flames had already engulfed the home by the time firefighters arrived just after midnight on Sunday night. The couple were taken away in an ambulance before the fire trucks showed up about 12 minutes after they were alerted to the fire along the province's southwest shore — about 265 kilometres southwest of Halifax.

Olsen said many families have reached out to him to offer support.

"There's a lot of people who have told me that when they put their kids to bed at night now, they give them an extra squeeze and tell them that they love them -- and they take a second look."