Anti-racism advocate Tim Wise will give a public lecture at Mount Saint Vincent University next week
Mar 14, 2018 11:13 AM By: Michael Lightstone 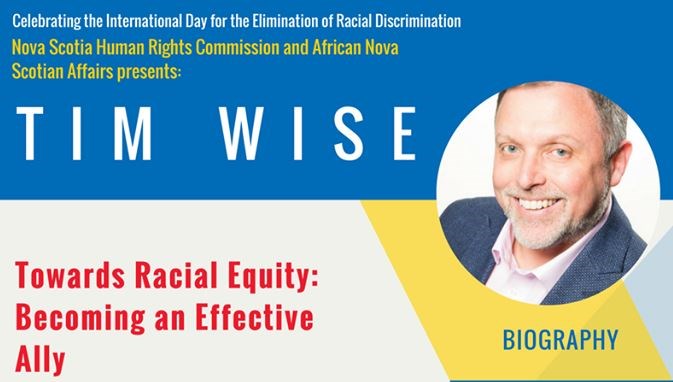 An American anti-racism advocate and educator is scheduled to give a public lecture in Halifax on March 21 to mark the International Day for the Elimination of Racial Discrimination.

Tim Wise will be speaking about this topic, at Mount Saint Vincent University: Towards racial equity: Becoming an effective ally.

Admission is free and those wanting to attend are being asked to RSVP on or before March 15.

In the past, Wise, 49, has publicly addressed bigotry, white privilege, ethnic stereotypes, Holocaust denial and other matters linked to intolerance. Raised Jewish in the United States, he also has family ties to Scotland.

He’s the author of the 2007 book White Like Me: Reflections on Race from a Privileged Son.

A free event the day before the MSVU lecture, (on March 20), at Dalhousie University, also commemorates the UN’s anti-racism day. It’s presented by the university’s Black Student Advising Centre and Dalhousie Student Union.

The program will be held in Room 303 at the Student Union Building. Start time is 6 p.m.

As declared by the United Nations, March 21 is the annual anti-racism day held in remembrance of the 1960 Sharpeville massacre in South Africa. Dozens of black people were killed and 180 were injured when police opened fire on an anti-apartheid protest.

In Nova Scotia, two separate provincial probes into the treatment of African-Nova Scotians are ongoing.

Last September, concerns over Halifax Regional Police street checks involving black citizens prompted the human rights commission to hire an expert to review street-check data in the context of racial profiling. And the $5-million restorative inquiry into past abuse at the Nova Scotia Home for Colored Children is to wrap up in March 2019.

In other race-relations news, National Geographic’s top editor, Susan Goldberg, said recently that past coverage in the widely-read, U.S.-based magazine “was racist.” The publication’s April edition is dedicated to race.

Goldberg acknowledged in an article posted online that National Geographic ran “appalling” stories in decades past, coverage that was full of stereotypes.

“Some of what you find in our archives leaves you speechless,” she wrote.

Goldberg identified herself in the piece as the 10th editor of National Geographic since its launch in 1888, and “the first woman and the first Jewish person – a member of two groups that also once faced discrimination here.”

Though the magazine’s content has improved, “the coverage wasn’t right before because it was told from an elite, white American point of view,” she told the Associated Press.

Other events in HRM include:

-Towards the Elimination of Racism: A Cultural Celebration featuring keynote speaker Honourable Judge Rickcola M. Brinton has been postponed due to inclement weather.
It will now take place Friday March 21 at 7 p.m.
Black Cultural Center - 10 Cherry Brook Rd
Admission is 'pay what you can'