Halifax Harbour Bridges has revised the times of the shutdown and the span will now be closed most of Saturday, July 6
0
Jul 5, 2019 9:03 AM By: Meghan Groff 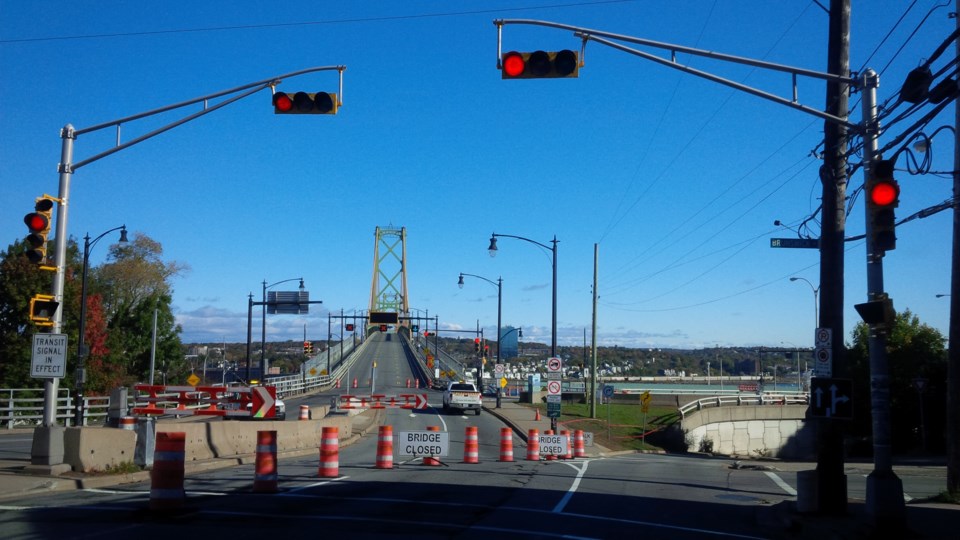 The Macdonald Bridge during a closure (Meghan Groff/HalifaxToday.ca)

Closures are scheduled on the Macdonald Bridge this weekend.

Halifax Harbour Bridges has revised the times of the shutdown and the span will now be closed most of Saturday, July 6.

The sidewalk and bike lane will stay open.

The closure will affect some bus routes.

Halifax Transit says the 1, 3, 10, 61 and 320 will be detouring over to the MacKay Bridge, starting 15 minutes before each closure.

Crews will be replacing the bearings on two of the piers. Halifax Harbour Bridges says the bridge's bearings date back to when it opened in 1955, and the process of replacing them began in 2015.

Another closure will be needed near the end of the month, but the date is still to be confirmed.

In addition, it's expected the Macdonald will be closed from 8 p.m. to 5 a.m. starting Monday, July 15 to Thursday, July 18 (at the latest) for work on the dehumidification system on the main cable.

As for the MacKay Bridge, starting the weekend of July 13th, two lanes will be closed -- one in each direction -- every weekend from 7 p.m. Friday until 5:30 a.m. Monday.

This is to replace expansion joints at the abutments, replace waterproofing and asphalt on two of the four lanes of traffic, and inspect the main cable.

The lane reductions are expected to last until September, but as the work is weather dependent, all lanes of the MacKay will be open when it's not safe for crews to be out.