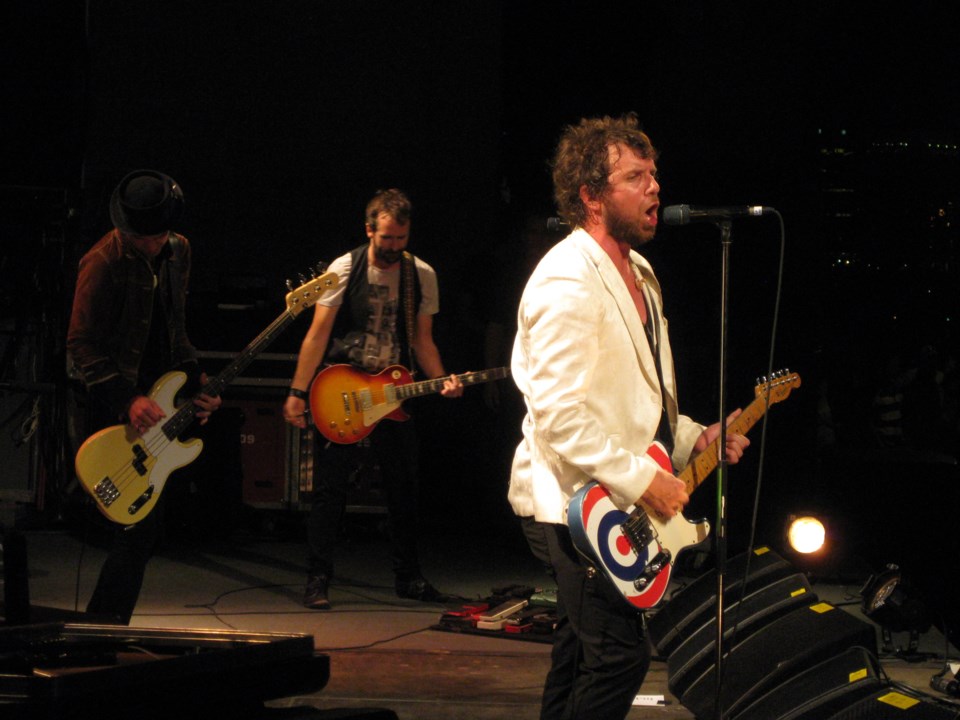 In 2003, rockers The Trews made it clear they weren’t ‘ready to go,’ and rock fans everywhere made sure they were on the scene to stay.

As their current tour nears the Nova Scotia homeland, the Antigonish band is more than ready to come back again.

“We’re feeling really good, and we’re looking forward to that Marquee gig,” said singer Colin MacDonald. “It’s one of our favourite spots in the country, and actually, it’s run by our bass player’s father.”

The band, who moved to Niagara Falls, Ont. in 2001, just before they hit it big with certified gold album House Of Ill Fame, still miss the smells, sights and sounds of the East Coast.

“At that time, we felt like we were just spinning our wheels. We weren’t good enough yet to get those gigs in the Maritimes. We moved to get a clean slate, and Niagara Falls was the only place cheap enough to get a house where we could jam,” he said.

“We flew under the radar until that album, but we’ve always been proud and still tell people we’re from Antigonish. Even in Halifax, it’s a great music city, and we wear our blue, white and gold proudly.”

Despite that, save for a Truro show in the summer, the band hasn’t been to Nova Scotia since 2016 during their greatest hits tour.

Now, with new album Civilianaires, they’re getting ready to rock the coast harder than ever.

“The tunes on this album are so good live. We’re holding off on this huge national tour until next year, but the record came out in September. We can’t wait to see how it plays,” he said.

“There are certain songs that we have noticed are excellent recordings that are hard to play live. Yet, songs like So She’s Leaving have solid grooves and take flight with an audience.”

He sees one song on the new album that may not resonate on the album, but will be an absolute hit live.

“The last song on the record is called Jericho, and it’s amazing live. People will just love it,” he said.

The Trews, now 13 years past their debut album, have learned one thing: everything changed every six months.

“We needed to learn to roll with that constant change. There are no guarantees, and we need to be mercurial and dynamic. The turnover rate is a lot quicker,” he said,

“People get through a whole record in a few days with Spotify and AppleMusic, and it’s at their fingertips. Not to sound too antiquated, but I remember buying CDs and loving that.”

Throughout their career, they’ve managed to play ahead of Led Zeppelin’s Robert Plant and have won countless awards, but MacDonald recalls one special honour.

“I called my manager because I heard about the Rolling Stones doing a secret show in Toronto, and asked about tickets. He called back and said, ‘How would you like to open for them?’”

“Of all the things I look back at, I wonder if I’ve just been dreaming. I don’t remember these shows, I remember the way they made me feel though.”

He remembers the early days, including a Scotiabank Centre (then Metro Centre) gig with Three Days Grace and headliners Nickelback.

“Someone threw a bottle at Chad (Kroeger), Nickelback’s lead singer, and at the time they were touring with a ton of pyrotechnics. They had to stand in specific spots, or there’d be trouble,” he said.

“We’ve done a whole lot of shows with so many bands, and we’re very lucky to have these stories.”

The Trews drew the ire and divided fans last November with their single The New Us, taking aim at U.S. President Donald Trump.

“When you go political, you take a risk, for sure. We wrote that tune while Trump was threatening nuclear war with North Korea. The song came out as a rant. We took a knife to a knife fight, and you can’t be surprised if people hit back,” he said.

“Some weren’t happy with a rock band expressing their politics, but we do it anyway. We put out Gun Control (2008 song) too. If we feel it, we write about it. We live with the consequences of what we commit to tape.”

Though three members remain from when The Trews started in 1996, MacDonald’s drummer cousin Sean Dalton left in 2015. Chris Gormley currently holds the sticks for the band.

“These years have been challenging, but we’re tight. We lost Sean, a founding member, when he decided to leave for other opportunities. But it’s a good bond, and we’ve seen this band through ups and downs,” he said.

The Trews play a sold-out show at The Marquee Ballroom on November 9th, at 8 p.m.