'Support is the biggest thing you can offer any youth, anyone in the rainbow community,' Roy said, 'There’s so much need'
Jul 26, 2018 9:19 AM By: Nicole Bayes-Fleming 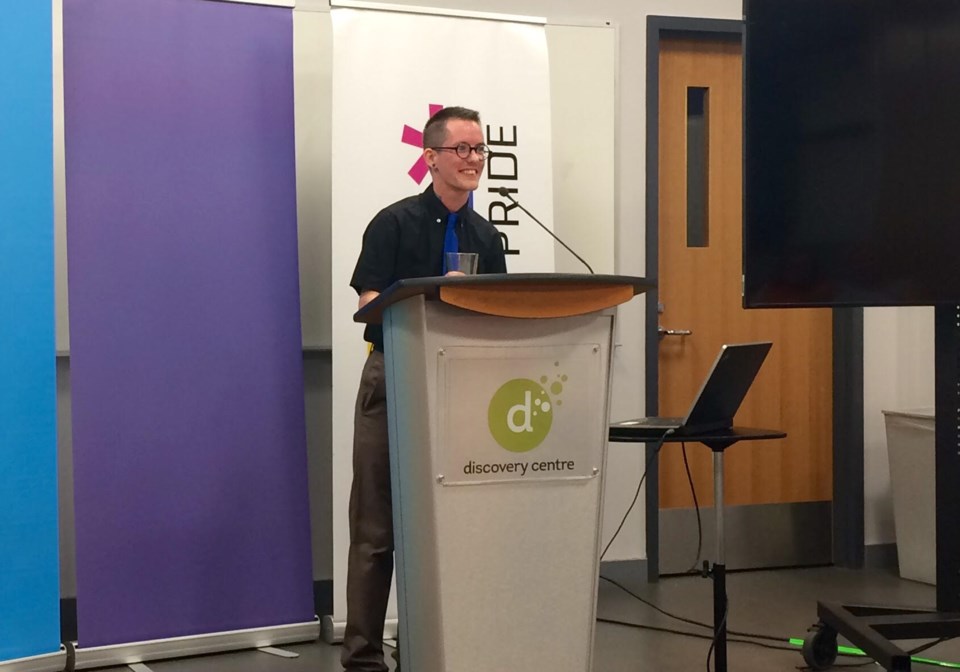 Jay Aaron Roy speaks at the Discovery Centre on July 25.

As a young person, Jay Aaron Roy could never have imagined he would one day be a speaker at Halifax Pride.

“I grew up in rural Nova Scotia, pretty religious, so I didn’t have any knowledge of the queer community whatsoever,” he said.

Roy, who hails from Fall River, shared his story of coming out and transitioning with a packed room at the Discovery Centre on July 25.

“I did hide myself away for many years,” Roy said. “For a large chunk of my life, it wasn’t really me. It was more like a shadow of me or a pale reflection … I was honestly desperate to see the reflection to show what was inside of me.”

Roy described how watching YouTube videos made by other trans people and connecting with them over social media helped him recognize who he truly was, and reach the decision to begin transitioning.

“Representation had helped me feel that I wasn’t alone,” he said.

Today, Roy owns Cape and Cowl Comics and Collectibles in Lower Sackville, where he also provides a separate room for youth to use as a safe drop-in place.

“Support is the biggest thing you can offer any youth, anyone in the rainbow community,” Roy said. “There’s so much need."

The space is used by many; Autism Nova Scotia uses it to host Dungeon and Dragons games, and it is available to be rented out for birthday parties.

Roy also has a partnership with a local social worker, who provides free counselling for three hours every two weeks.

Roy said he was inspired to provide the safe space by his mother, who ran a community art class when he was growing up to counteract the childhood bullying he received.

“I had a safe haven when I was young because my mom created it,” Roy said.

During his discussion, Roy also spoke about the injustices faced by the trans community he only became aware of once he began transitioning.

“I started to see ways that I could change things that weren’t at the standard I thought they should be at,” Roy said. “I started to see injustices where I hadn’t been aware of them before.”

In 2014, Roy and other trans advocates such as Jessica Durling successfully petitioned to no longer make proof of gender reassignment surgery a requirement in order to change the gender displayed on government identification.

While there have been many advancements for the queer community, Roy said there is still work to do.

“Just in my own community of Lower Sackville I see so much need, all you really need to do is open your eyes and open you ears to see it and hear it,” Roy said. “And so when I see that need, I open up those spaces.”

Roy, who has worked as both a church youth leader and a camp counsellor in the past, said that what youth often need the most is someone who will listen to them.

“I finally realized what all those kids needed was a friend. And that’s really what I was to them, and now I can just be a friend with better information,” Roy said. “So I guess the point of all of this is really, simply: be a friend.”

Nova Scotians urged to follow burn restrictions as dry conditions continue
Aug 12, 2020 3:39 PM
Comments
We welcome your feedback and encourage you to share your thoughts. We ask that you be respectful of others and their points of view, refrain from personal attacks and stay on topic. To learn about our commenting policies and how we moderate, please read our Community Guidelines.