During the high winds of last weekend's hurricane, a roof ripped of a Tobin Street apartment complex, hitting and damaging a neighbouring building
Sep 14, 2019 5:46 PM By: Victoria Walton 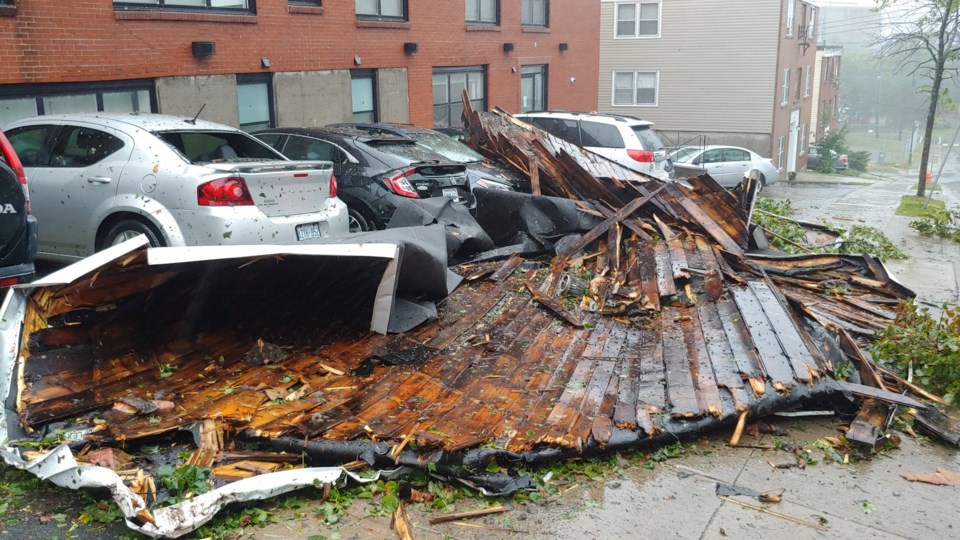 During the high winds of last weekend's hurricane, a roof ripped of a Tobin Street apartment complex, hitting and damaging a neighbouring building.

As a result, many residents of both buildings have been displaced -- some for as much as two months.

"We didn't know anything was happening until a police officer aggressively knocked on our door and told us we needed to evacuate," says Carleigh MacKenzie, a student and resident at 5320 Tobin, the building that was hit by the roof.

When the wooden roof ripped off the building next door at 5310 Tobin, MacKenzie says she was home, but didn't notice because the winds and rain from the storm were already pounding loudly against windows.

About 25 minutes after the roof hit, MacKenzie and those in her building were ushered onto a transit bus.

Before she left, the second-floor resident already noticed water beginning to flood into her unit.

"Our apartment flooded after the police officer came to the door," Mackenzie adds. "The water started coming in through the light fixtures as we were getting our things together to evacuate."

Over the course of the past week, MacKenzie has been in touch with her landlord about the future of her rental situation.

"The building is gutting the floors and the ceilings, and they have to restructure the drywall," she says.

MacKenzie has been told she could be displaced for at least two months. Thankfully, her tenant's insurance provider covers up to $10,000 in accommodations, and has found her a suite at a downtown hotel.

"You don't expect to need the policy like a week in to moving. With a $1000 deductible, it covers hopefully everything we need," she adds.

But MacKenzie says the deductible and other out-of-pocket expenses are beginning to add up.

"As a student, it's hard to come up with that money on a whim," she says.

The roof of 5310 landed in the front parking lot of MacKenzie's building, smashing the window of her car -- something she was told is not covered by basic car insurance.

"A pipe from the roof landed on the windshield and smashed the whole thing, leaving glass shards inside the car," she explains. "We're trying to brush them out but they're so small you can't get rid of them easily."

For brief periods of time, MacKenzie and her boyfriend were allowed back into their building to collect a few necessary possessions.

"It smelled so bad," she says, especially the soggy laminate flooring that was beginning to grow mildew.

MacKenzie says that today was residents' last chance to grab items before everything is moved into storage so repairs can begin.

In the coming weeks, she hopes to get in touch with the owners of 5310 to pursue reimbursement, and hasn't ruled out the possibility of taking them to small claims court. Her own landlord won't cover damage to belongings since it wasn't their roof that ripped off.

MacKenzie also hopes to get in touch with her councillor, Waye Mason, and push the city to investigate why the roof came off in the first place.

"I want to know if an investigation can be launched to see if it was negligence, to see if the roof would've detached no matter what, to determine if it whether really just an unfortunate act of God or if something could've been done to prevent it," she says. "I think that would really influence my decision to go to small claims."