'There's lots of work to be done' : Roberts reacts to new role as interim leader of Green Party 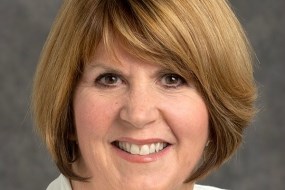 Halifax's Jo-Ann Roberts says she was just getting used to being deputy leader of the federal Green Party. Now she's been appointed interim leader.

On Monday, Elizabeth May announced she would be stepping down as head of the party -- a role she's held for 13 years -- handing over the helm to Roberts until a new leader is chosen at a party convention next fall.

Roberts says May will continue on as parliamentary leader, handling duties in Ottawa.

"So I will concentrate on building the party to prepare for the leadership convention in October," she explains in an interview on NEWS 95.7.

"I will continue the role of leader in meeting with outside groups, further developing policy, in recruiting members, doing speaking engagements, the role you'd see in the public face of the leader outside the House of Commons."

"While I'm a pretty hard-working person, I think we need someone who brings a new lens to this," she says. "I'm hoping we hear from a diversity of individuals who want to be leader."

Paul Manly and Jenica Atwin are the other two MPs with a seat in Parliament, and as neither have been tapped as interim leader, they'd both be eligible to run, however Atwin has already said she has no intentions of going for the job.

"Oh my gosh, I don't think I could fill her shoes," says restaurateur Lil MacPherson, who ran in Dartmouth-Cole Harbour.

Councillor Richard Zurawski, who was a candidate in Halifax West, also doesn't want to take a shot at the leadership position.

"I'm happy to be a candidate and support the Greens ... but I'm certainly not leadership material," Zurawski explains.

"I think it's now time for the younger generations to start stepping forward because it really is their future."