'There can be no reconciliation at gunpoint': Halifax stands with Wet'suwet'en

Two events took place in Halifax this past week in solidarity with the Indigenous people of Wet'suwet'en First Nation
Feb 16, 2020 5:26 PM By: Victoria Walton 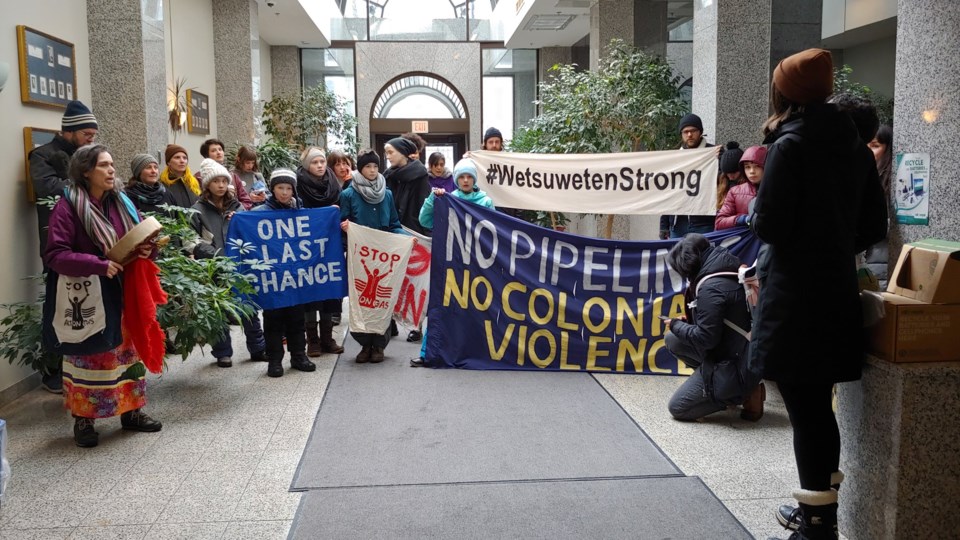 Protesters have gathered at One Government Place in solidarity with the Wet’suet’en Nation’s opposition to pipeline construction. (Matthew Moore/NEWS 95.7)

Last Tuesday, around 140 people in Halifax stood in a demonstration that blocked access to Halifax's container terminal.

The events were all in solidarity with Wet'suwet'en First Nation, a British Columbia Indigenous population whose land is currently under siege by RCMP.

"I don't consider this to be a protest movement. It's a land defense and human rights defense struggle," says Robin Tress, climate and social justice campaigner for the Council of Canadians.

The cause of the blockade is the Indigenous people's refusal to allow a 670-kilometre natural gas pipeline through northern British Columbia.

"We've worked closely with the Wet'suwet'en land defenders as they and other Indigenous communities face rising pressure from oil and gas industry to give up their rights and so we're standing in solidarity with them," says Tress.

As many Canadians urge that the country follow the "rule of law," Tress points out that the highest law of the land, the Supreme Court of Canada and the Canadian Constitution, both give Indigenous people the right to give consent for what happens on their territory.

"They arrested peaceful Wet'suwet'en women who have been on that land for years running a healing centre to help Wet'suwet'en and Indigenous peoples heal from the scars of colonialism," says Tress.

In the process, police knocked down a wooden fence painted with the word 'reconciliation.' Tress says this is a metaphor for how reconciliation in Canada is going at this point in time.

"Think this is a very powerful image and a visual metaphor for the state of reconciliation," she explains. "There can be no reconciliation at gun point."

Although the Wet'suet'en nation is on the opposite coast, Tress says it is just one example of Indigenous struggles that have been happening across the country for centuries.

"I think this also should be considered a national issue," she says. "Because the whole of Canada including the Canadian government and the Canadian people have a responsibility to recognize that this country and all the things we love about it exist on Indigenous lands."

As demonstrators have blocked CN Rail lines across the country in solidarity, Tress acknowledges that it is causing some disruptions.

"The purpose of these disruptions is that we need, clearly, to make people feel, to make the government feel, that we cannot continue with business as usual and that action must be taken," she says.

But to make change, she activist says that the status quo needs to be challenged.

"It's certainly inconvenient, I understand that the trains aren't running," Tress says. "But it's even more unfortunate that the federal government has just refused to solve this crisis for so long that really the only way to get attention and to force action on this issue is to cause that kind of disruption."