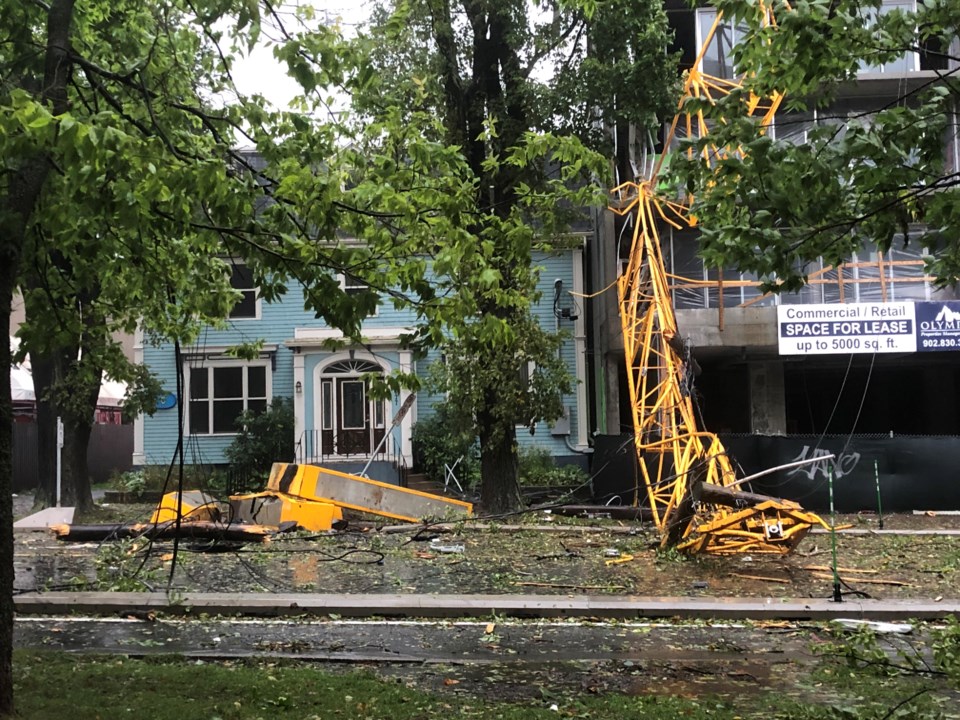 Ten months ago – before the COVID-19 pandemic was even heard of in Nova Scotia – we were in the midst of another difficult event: Hurricane Dorian.

“Dorian sort of blew through, and if I remember correctly no one was hurt here. Most people say ‘Oh yeah that was fine, nothing really happened’ and I’m glad of that, but it was a lot harder for us,” says Ian Gray, a partner at the South Park Street law firm Walker Dunlop.

Situated in a blue house between The Trillium and the Stillwell beer garden, Gray’s law firm was directly under the crane collapse in early September 2019.

“As it turns out it missed our house by a couple of meters or something like that,” he tells NEWS 95.7’s The Todd Veinotte Show.

But the lawyers were still forced out of their offices for over two months, losing money and cases in the process.

“We had to go and get temporary offices and we’re a law firm and all of our files and records were in the office,” Gray explains. “So we had to put off a lot of trials and try to reconstitute what we could remotely.”

In mid-November, the partners at Walker Dunlop moved back into their offices, and business as usual began to resume. In the months since, Gray says they’ve heard little from the provincial government about the investigation into the crane collapse.

“There’s been an inquiry into what exactly happened and there’s been no report on this. We don’t know, we all have suspicions – and I guess and there’s always rumours – but I don’t know, I can’t tell you why that crane collapsed,” he says.

But this week, a new crane showed up on South Park Street, closing the road down to begin repairing the damage done to The Trillium apartment building. “The city says they told all the affected businesses. I am sure they made an effort but I can tell you I didn’t hear anything and I checked with my partners, they didn’t hear anything,” says Gray.

As the months go on and COVID continues, Gray worries the businesses and residents affected by the crane’s collapse are being left in the dark. “I would be extremely surprised if someone wasn’t responsible. I think somebody, somewhere made a mistake,” he says.

The lawyer says affected parties are eager to find out who’s liable for the damage and the loss of business done by the crane.

“I’d say we lost several hundred thousand dollars, a couple hundred. Now, some of that was paid for by our insurance, the money we spent renting temporary office locations, temporary equipment we had to buy,” Gray says. “That’s been paid for, but the loss in our business was not part of that, and that’s still outstanding.”

And, holding true to his profession, Gray says that litigation may be in the future once that information is made public.

“It was a serious threat to our business, other businesses as well,” he says. “And if someone was at fault for this I don’t think it’s unreasonable to say, ‘Okay, compensate us for the damage you did to us.’”

But until the investigation is released, Gray can only speculate on what happened based on what he’s read in the media.

“I read that at the time that this happened, there were 15 cranes up of the same type up around the city,” he says. “Fourteen of them stayed up without a problem, and it would stand to reason that something went wrong with this one.”