Shoppers at Sobeys grocery stores will soon need to bring their own totes or lug their purchases home in paper bags as the chain moves to phase out plastic bags by February 2020. The grocer's owner Empire Co.
Jul 31, 2019 7:11 AM By: Canadian Press 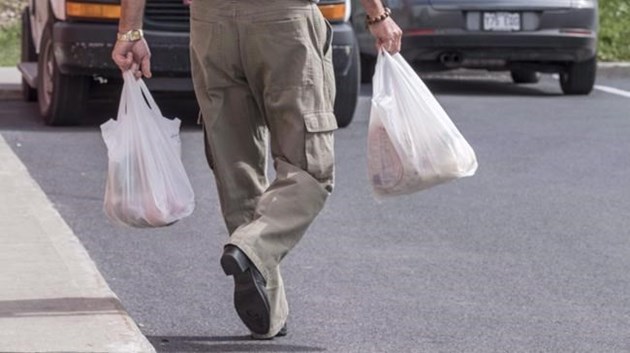 Shoppers at Sobeys Inc. grocery stores will soon need to bring their own totes or lug their purchases home in paper bags as the chain moves to phase out plastic bags by February 2020.

Canadians go through hundreds of millions of single-use plastic bags at grocery stores each year, and the chains — most of which charge a nominal fee for plastic bags —are facing pressure from increasingly eco-conscious consumers to do more to eliminate their plastic-centric packaging.

Sobeys said it is making the move to phase out plastic bags as a response to calls from customers and employees to use less plastic. The retailer also committed to launch programs to reduce plastic in other areas of the stores.

"We really felt that the amount of avoidable plastic in grocery stores is shocking," said Vittoria Varalli, the company's vice-president of sustainability. The change will eliminate 225 million bags used annually at Sobeys 255 stores.

The company, which is owned by Stellarton, N.S.-based Empire Co. Ltd, will phase out plastic bags and introduce paper bags at its other banners soon after. Sobeys also operates Safeway, Thrifty Foods, IGA, Foodland, Freshco and Farm Boy. It boasts more than 1,500 stores across all its chains.

"The ultimate goal," said Varalli, is to eliminate plastic bags from the produce aisle as well. It plans to introduce a line of reusable mesh alternatives made from recycled bottles in August.

Food companies have been on a mission to reduce plastic from their operations recently as consumers push for more sustainable practices. Some are taking initiatives to change ahead of the federal government's announced ban on single-use plastics by 2021, which would force them to find non-plastic alternatives.

Last year, restaurants responded to pressure to eliminate plastic straws after a video showing someone removing a straw stuck up a turtle's nose went viral.

Starbucks, A&W and other chains made promises to remove the item from their eateries, and some have already done so.

But the trend toward sustainability didn't stop at straws. Many fast-food giants started experimenting with other green packaging. In June, McDonald's Canada announced it would test wooden cutlery and other recycling-friendly containers at two restaurants.

In coastal regions, plastic bags create a major environmental problem, he said, where they persist for a long time and harm wildlife.

Despite the fact that Canadians use about 2.86 billion plastic bags a year, Buonsante sees them as "low-hanging fruit" that people easily can do without.

Grocery stores are slowly starting to get on board with the push to eliminate single-use plastics.

Metro Inc. announced earlier this year it would start allowing consumers to use reusable containers to store fresh products, such as those from the deli and pastry counters, at its Quebec stores.

Loblaw Companies Ltd., meanwhile, started charging five cents per plastic bag about a decade ago and reduced the number of plastic bags used in its stores by nearly 12 billion, wrote spokesperson Catherine Thomas in an email.

It has donated $10 million to the World Wildlife Fund with some of the proceeds as of the end of 2018. Thomas declined to provide the total amount the company has made by charging for plastic bags.

"Change is kind of happening," said Buonsante, but — for the most part — these initiatives are limited in effectiveness.

A five-cent bag fee is not a strong deterrent, he said, and companies should create incentives to help shoppers shift their habits.

Governments around the world have started to crack down on single-use plastics to force companies into change.

Prime Minister Justin Trudeau said in June that his government is starting the regulatory work to ban toxic single-use plastics because the garbage infiltrating the world's waterways is out of hand.

Nothing is going to be banned overnight, with the process to implement a federal ban or limitations on a product under the Canadian Environmental Protection Act usually taking two to four years. The goal is to make decisions on everything on the list by 2021.

Trudeau said Canada's plan will "closely mirror'' that of Europe. In March, the European Parliament agreed that by 2021 the European Union will ban almost a dozen single-use products including plastic plates, cutlery, cups, straws, plastic sticks in cotton swabs, balloon sticks and stir sticks, and Styrofoam cups and take-out food containers. Oxo-degradeable plastics including plastic grocery bags, which break down into tiny pieces with exposure to air but never fully disappear, are also to be banned.