Alex Khasnabish is not comfortable allowing police to take part in a panel discussion following the screening of two films dealing with police violence as part of The Radical Imagination Project
0
Jul 2, 2019 7:13 AM By: Matthew Moore 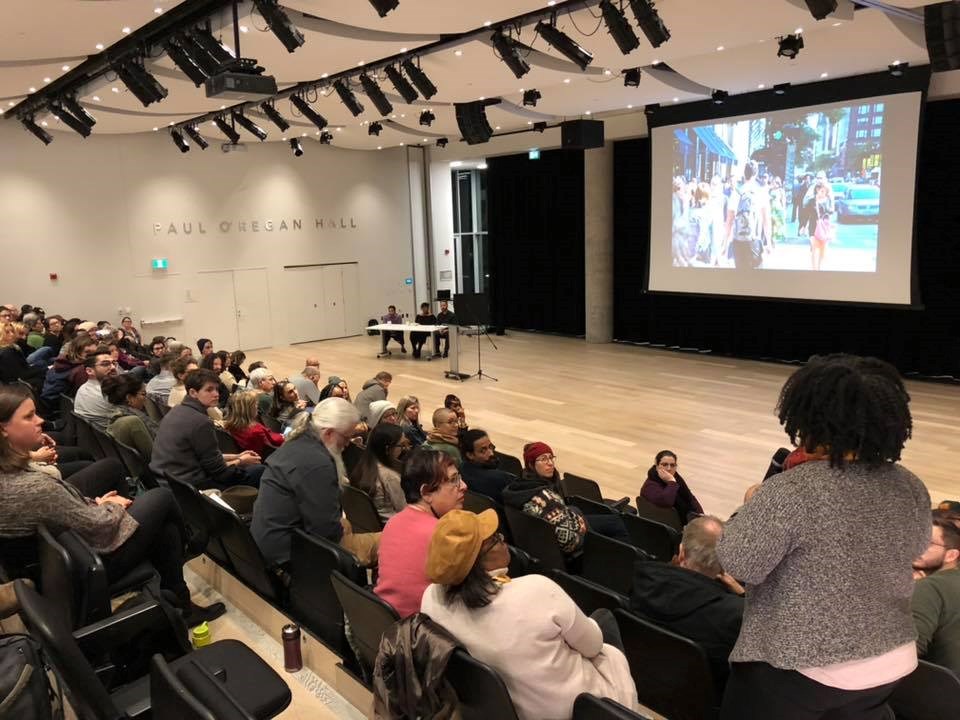 Public discussion during The Radical Imagination Project at the Halifax Central Library in 2018. (Submitted by Alex Khasnabish)

A local university professor who has spearheaded a film series over the past four years says he was won't be allowed to show films dealing with police violence, unless representatives of Halifax Regional Police are allowed to speak.

However, last week, the Libraries Program Manager told Khasnabish that members of Halifax police would need to be present, due to two films being screened this fall; 'Profiled' and 'Trouble 19: All Cops Are Bastards.'

Khasnabish tells NEWS 95.7 in the past, he's screened films discussing misogyny, the climate crisis and colonization, but was never asked to have both sides present to respond.

"So it did catch me off guard that it was specifically this issue around policing that raised the flag for the library, and I was essentially told by the programming manager that the programming would not proceed as a sponsored library program, if I refused to include representatives of the Halifax Police Department as featured speakers at these events," explains Khasnabish.

Khasnabish says in the past, he didn't ask big oil companies to partake in discussions over climate change, or men's right groups have a voice on the topic of misogyny.

He remains confused as to why the library is requesting a police presence.

"If there had been a specific complaint that was related to the series that was generating this concern, I asked why this issue, and not other issues, I asked why now, and in this way, and I basically refused, and I would continue to refuse to allow that kind of intervention in the programming," says Khasnabish.

Khasnabish points out having police present mimics censorship of a touchy topic, and he is unclear why the library is requesting this action for the first time in the film series' history. He explains that he isn't comfortable allowing police to take part in the panel discussion.

"It's impossible for community members who have had negative experiences with the police to be open, and to feel welcome to discuss those issues with police present, formally as an institution in the room," says Khasnabish. "Of course police individually, individual police officers are welcome to attend the screenings, but in terms of providing a privileged platform for individuals to speak as representatives of institutions, that's something that I haven't typically done."

In a statement emailed to NEWS 95.7 Halifax Public Libraries says the goal is for the library to provide an enriched dialogue, and they suggested bringing in the voice of Halifax Police for Khasnabish's screenings.

Chief Librarian and CEO Åsa Kachan explains that library suggested this because of the "importance of facilitating an open, and uncensored community conversation around the issues of policing, injustice, and violence."

She goes on to write that libraries are democratics, inclusive spaces, and their goal is a balanced perspective in partnered Library programs, and to "look for opportunities where we can provide the public with many different viewpoints so they can be well informed about the issues and we can work toward solutions to the challenges our society faces."

Khasnabish says he is looking at all options for how to continue The Radical Imagination Project film and discussion series, while Kachan writes they value these initiatives that open conversations about issues that matter to the community.