December 6, 1917 was a clear morning with no fog on the harbour, which makes it difficult to understand how two ships could have collided
Dec 6, 2017 5:15 AM By: Meghan Groff 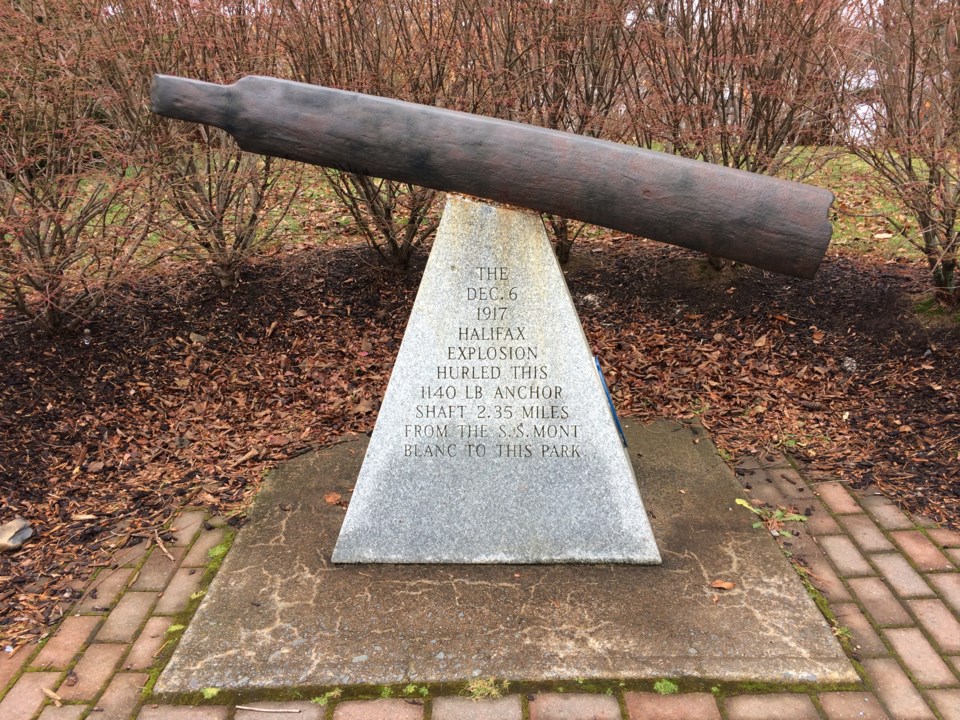 A piece of the Mont-Blanc at Regatta Point Park (Meghan Groff/HalifaxToday.ca)

Listen to Rick Howe's conversation with historian and author of " 6•12•17: The Halifax Explosion" John Boileau

It’s been a century since the Halifax Explosion levelled large parts of the city, taking the lives of around two thousand people and injuring thousands more.

At 8:45 a.m. on Dec. 6, 1917, the SS Mont-Blanc, fully-loaded with wartime explosives, collided with the Norwegian ship SS Imo in the part of Halifax Harbour called ‘The Narrows.’

About 20 minutes later, the Mont-Blanc exploded, obliterating buildings and structures in the largest man-made explosion prior to the development of the atomic bomb.

It was a clear morning with no fog on the harbour, which makes it difficult to understand how it could have ever happened.

Historian and author of " 6•12•17: The Halifax Explosion" John Boileau said both the captain and pilot of the Imo were killed in the blast, but we do know they were coming down the wrong side of the harbour.

"There was an American tramp steamer by the name of SS Clara that was the first ship through the submarine net that morning just before Mont-Blanc, for some reason Clara proceeded up the Halifax side of the harbour, when it should have been on the Dartmouth side."

He said that's likely because Clara had to anchor in Bedford Basin and it was more convenient to be in that lane, but Imo had to swing wide to avoid her.

"Imo, once having moved to the Dartmouth side, should have then, when it was clear, moved over to the Halifax side, but it didn't," he explained.

Boileau said once the Imo started nearing the Mont-Blanc, both ships saw each other and both ships blew whistles.

"Mont-Blanc blew first which automatically meant that ship was in charge of the situation, blew one whistle, 'I'm in my lane, I'm staying here,' amazingly Imo's response was, 'And I'm staying where I am.'"

He said both ships blew their whistles a second time and eventually resorted to last-minute maneuvers to try to avoid hitting each other.

"Mont-Blanc turned to the Halifax-side, but that's when Imo was reversing, and her bow slashed into the front of the Mont-Blanc. The rest is history."

The neighbourhood of Richmond was obliterated by the resulting blast.

Boileau said men who were working in other areas of the city rushed home to try and find their families.

"The north end was flattened, debris filled all the streets, street signs were knocked over, it was impossible to tell where one's house was, it was such a scene of disaster."

He said there are accounts of people having the clothing blown right off their bodies, including a responding fireman.

Firefighters hopped in the Patricia, a state-of-the art motorized piece of equipment, and rushed to Pier 6, which was essentially ground zero for the explosion.

Eight were killed instantly, a ninth died on New Year's Eve, making it the largest loss of life for firefighters in Canadian history.

However, the driver, Billy Wells, miraculously survived after being catapulted out of the vehicle.

"He came to a few minutes later, completely naked, a large gash in the muscle of one of his arms, and bizarrely, holding in his hand a piece of the steering wheel of the Patricia."

Of the 9,000 injured, hundreds were left visually impaired by flying glass and debris.

A ship on fire in the harbour attracted many onlookers who were unaware it was carrying explosives, some watching the scene from their living room windows.

"Windows blew in and turned into thousands of tiny daggers and shards of glass and blinded many people, some totally blinded, some blinded in one eye," explained Boileau. "A large number of people did recover, their eyesight wasn't completely lost, but their eyes were irritated and swollen shut."

He said many survivors were also marked with what became known as an explosion tattoo.

"In that explosion there was the fuel, the oil from the ship, as well as other bits and pieces that made black, oily smoke," he said. "This black oily substance got into the wounds, and for the rest of their lives, on their faces, arms, other parts of their body, they bore what were called explosion tattoos, they were quite a common site."

The Halifax Explosion happened during the First World War, and initially many believed the Germans were responsible.

"People thought it was either German battleships offshore that were bombarding Halifax, or German Zeppelins were dropping bombs on the city," explained Boileau. "There were people who absolutely swore they saw grey-clad German soldiers marching through the streets of Halifax."

"Soldiers who had served on the Western Front who were back here in Halifax said the devastation was worse than anything they had seen in France and Flanders."

Boileau said there were around 5,000 Canadian soldiers in Halifax on December 6, 1917, about 600 of those were medical personnel.

"With, perhaps the exception of a few hours on the first day, there never was a shortage of medical staff in Halifax to treat people," he said. "Now certain anesthetics ran out, a lot of the hospitals and wards were just makeshift, set up in the YMCA, school gyms, university halls, but people were treated quite quickly."

He said the police and fire departments were very small and not capable of handling a disaster of that magnitude on their own.