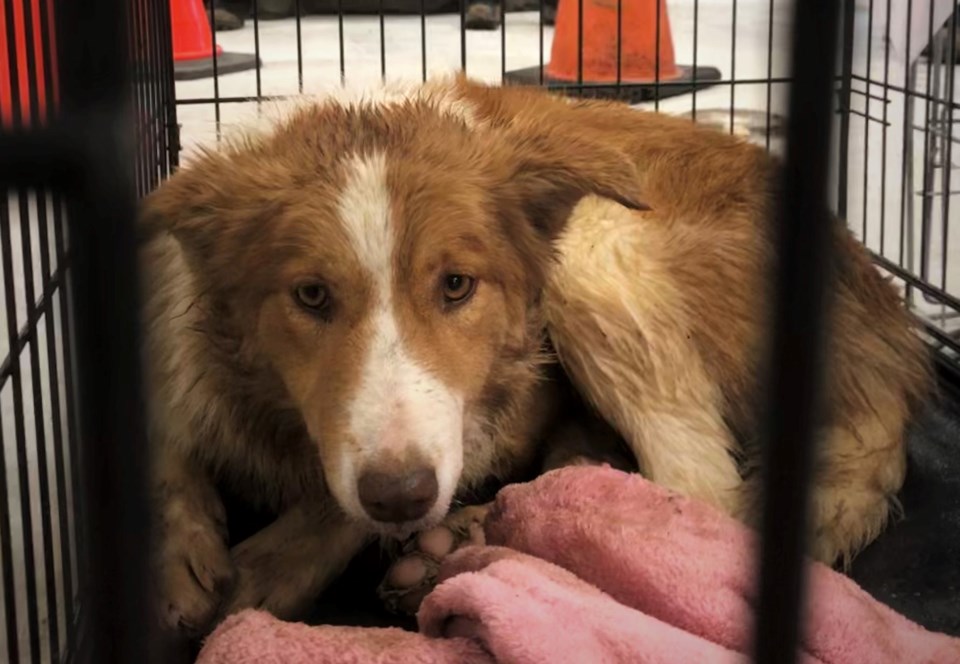 One of the 35 dogs rescued from a puppy mill by SPCA Enforcement Officers. (SPCA Facebook)

Earlier this month, 35 Jack Russell terriers and border collies were seized from a home in Wolfville, N.S.

Now, the owner of the so-called puppy mill is meeting with the Animal Welfare Appeal Board to try to get their dogs back.

"These dogs are hungry, they're crying for attention, they're abused, they're dirty, they're cold," says Brenda Gerroir, an animal rights activist and creator of the Justice for Meeka Facebook page.

With the appeal set for Monday December 30 at 9:30 a.m., Gerroir and other animal activists have organized a protest.

On Thursday, the Nova Scotia SPCA put out a memo asking the public to turn up to show their support for the animals.

"The SPCA a lot of times has their hands tied. They can only work within the limits of the law," explains Gerroir.

The Wolfville puppy mill was described by SPCA chief provincial inspector Jo-Anne Landsburg as the largest she'd seen in her career.

"These people aren't in it for the welfare and the wellbeing of the animals, these people that are running the puppy mills are in it to line their own pockets with money," Gerroir says. "They don't care what type of conditions that they have these dogs in."

Section 37 of the Animal Protection Act allows any person to appeal an animal's seizure to ensure it was lawfully conducted, but Gerroir is worried that the law won't hold up, and the owners may get the dogs returned to them.

"There are laws in effect but these aren't being followed," she says. "Our justice system is allowing these people -- not only the people from Wolfville but other people that have abused animals -- allowing them to continue to walk the streets."

Before the 29 dogs and six puppies were seized on December 10, Gerroir says the owners already had plenty of time to improve the dogs' living conditions.

"They've had ample opportunity, the SPCA has given them an opportunity to make these problems better in the puppy mill that they're running, and they haven't done that," she adds.

This is one of the first big Animal Welfare Appeal Board hearings that will be open to the public, according to the SPCA, after the new Animal Welfare Act was passed last year.

"This is the first appeal hearing that I'm going to be attending so I'm not quite sure how many people are on this board," says Gerroir.

According to section 36 of the Act, the board will consist of "not more than 10 members appointed by the Governor in Council," but not all board members may oversee the appeal.

Gerroir is hopeful that the public will show up to support the dogs, but says the SPCA is still fighting an uphill battle.

"The SPCA is trying to do their job as best as possible," she says. "But what's happening is our justice system is not standing behind the SPCA. Our government needs to change these laws."

The animal activist says within the past few years, she's seen a change in public opinion of backyard breeders.

Gerroir says more and more people are reporting puppy mills to law enforcement and the SPCA, and are adopting animals from more reputable sources.

"There's the SPCA that has so many dogs out there that need homes. There are reputable breeders, but you have to do your homework. Just don't go online or Facebook and find someone that's selling dogs," she adds.

No matter how the appeal goes, the Wolfville-based owners could still face criminal charges for the treatment of the dogs.

"We want the people of Nova Scotia to know that these puppy mills are a bad thing, people should not be buying from them," says Gerroir. "And more important these people should not have these dogs in their possession."