Police investigating viral video of dog being mistreated in Dartmouth

In the video, a small dog can be seen being swung by its leash in circles several times
Jul 4, 2020 12:16 PM By: Victoria Walton 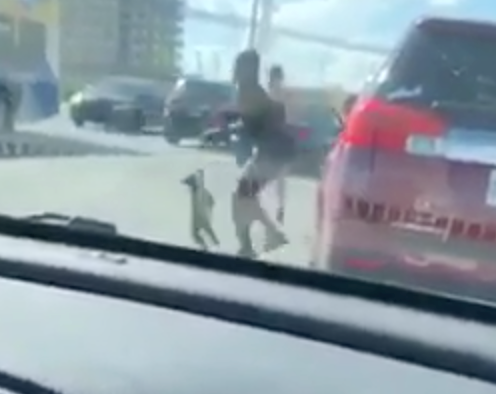 A screenshot of the video of a dog being swung from its leash in Dartmouth on July 1. (via Imgur)

Halifax Regional Police say they are investigating an altercation that occurred between four women on Windmill Road in Dartmouth earlier this week.

On July 1 at 5:30 p.m. police were called to the 600 block of Windmill Road where one vehicle cut off another in a drive-thru.

Police say the women involved didn't wish to pursue assault charges against the others. They initially heard a dog was involved but "the extent was not clear at the time." Officers checked on two dogs at the scene who both appeared in good health.

However, in the days since then a video has circulated on social media of the incident. In the video, one small dog is taken out of a vehicle and swung by its leash in circles several times.

Police say they are now continuing to investigate the mistreatment of the dog and anyone with information is asked to contact police at 902-490-5016 or submit an anonymous tip to Crime Stoppers.