While women have been involved in Canada's military service for more than 100 years, their involvement remains significantly less than men
Mar 15, 2019 4:33 PM By: Katie Hartai 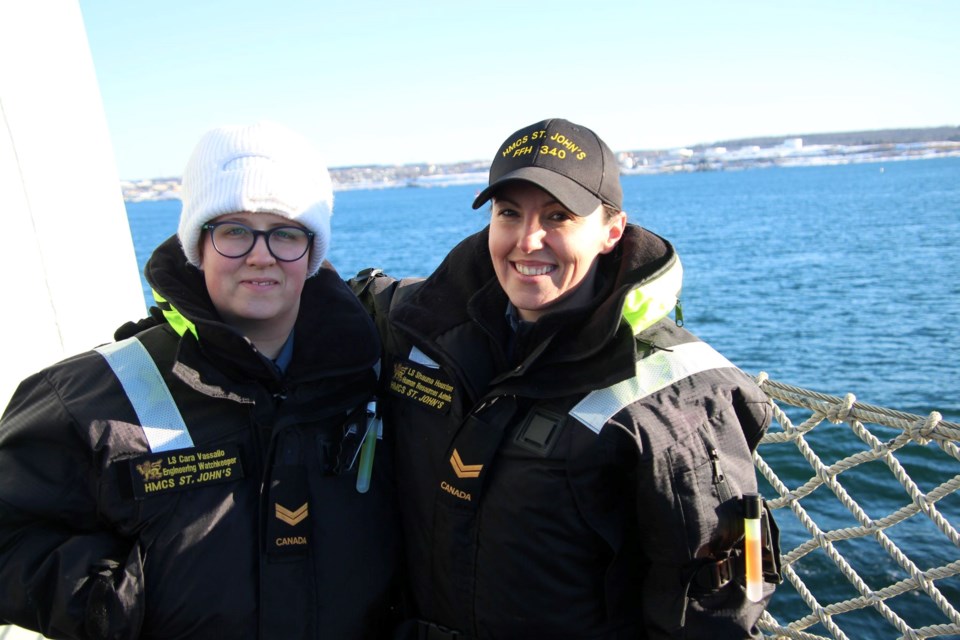 On the sea, land and in the air, the Canadian Armed Forces' purpose is to protect Canada and maintain international peace.

The Canadian Armed Forces (CAF) is an important part of Canada's national identity and yet, it's diversity does a poor job of reflecting the country's population.

The Canadian Armed Forces' most recent numbers from February 2019, show of the more than 96,000 members in the regular force and primary reserve, 15.4 per cent are female.

That number has made small increases over the years, from when women were limited to representing 1.5 per cent of the total force in the 1960s.

Commanding officer of HMCS St. John's, Peter Sproule, says while the number of women in the Navy is climbing, he would like to have a more gender balanced ship, saying a diverse group is a more effective one.

"Diversity of thought gives us the ability to look at problems from different perspectives so we won't come at it from one way," he says. "We'll have various options and opinions that we wouldn't otherwise come up with if we were just a group of white men, with similar experiences sitting around a table."

The commander joined the Navy in 1992 and says obvious efforts are being made to try and diversify, but it's a slow process.

"It takes a long time to not only change a culture but for people outside the organization to understand that our culture is changing and has become more welcoming and they can now come through the doors," he says. "It takes those brave trail-blazers to not only go through that and see that it is accepting, but then get that message out to other people."

Petty Officer Stacy MacDonald is the human resource manager on HMCS St. John's and has served for more than 30 years in the regular force and primary reserve.

She says she has noticed a big difference since Chief of the Defence Staff Gen. Jonathan Vance launched Operation Honour in July 2015 to combat harmful and inappropriate sexual behaviour in the Canadian military.

MacDonald says she has never felt more accepted and received as a female sailor.

"With the initiation of Operation Honour a few years ago things have changed immensely for the good," she says. "Being a female, I am just another sailor."

Shauna Houston is a leading seaman and has been in the Navy for five years and posted to HMCS St. John's for more than two.

She says headlines surrounding inappropriate sexual behaviour in the CAF shouldn't scare women away from joining.

"Don't be deterred by everything you see in the news. I know sometimes the negative aspects are portrayed but I work with 240 people, most of them being male, and that can be scary and overwhelming but the men and women I have worked with have been phenomenal," she says. "They have been very supportive and being away from home so many days of the year, they become your family."

Houston says life in the Navy is exciting, being at sea and traveling the world.

She says she has big ambitions for her career and doesn't think being a woman will hold her back from holding leadership positions.

Unfortunately, the numbers show otherwise for many women.

At the beginning of this year there were 14 women in General and Flag Officer ranks in the Canadian Armed Forces.

While this number is a record high with women in each service, it doesn't seem like much when compared to the 152 males in those positions.

Leading seaman Kara Vassallo says although women have been allowed to work in all occupations and roles for nearly 20 years, they tend to stay in more traditionally-female roles like communication, logistics and administration.

Vasallo is an exception as a marine board technician.

"The Marine Systems Engineering Department has the largest department on ship which is, I think it was 53, but is now 48. So out of 48 people I was the only female," she says.

Vasallo says while she loves her job and doesn't mind being the only female in her department, there are challenges unique to women at sea.

"We have to learn how to shave at sea and how to have our periods at sea," she says.

Sgt. Kristina Mayer is one of the few air force members and the senior meteorological forecaster onboard HMCS St. John’s.

Mayer says it's important the women on board help lift each other up.

"Being one of the senior females on board, I do find a lot of the younger women, the ones who don't have as much experience onboard the ship, come to me and ask for help because it's hard," she says. "You're surrounded by men all the time and they don't always understand how you're feeling and what's going on."

One of the most challenging parts of being with the Canadian Armed Forces for Mayer is how it interferes with being a mom.

She says the time away from her young daughter was particularly hard when she was deployed to Afghanistan.

She says new technology however, has helped.

"Technology has made it easier to be away, but it still sucks," she says. "It's not easy."

With diversity in the workplace becoming an increasingly important objective, gender issues are receiving more attention by the Canadian Armed Forces.

Its goal is to increase female representation across all trades and ranks to 25 per cent, so by 2026, one in four members will be female.

Military analyst Ken Hansen says while the goal is ambitious, it is possible, but the CAF needs to make some dramatic changes and fast.

"I really think there are plenty of areas that can be investigated," he says. "The social side, the professional side, the financial side and the recreational side. That four-cornered balancing act that creates the work environment."

He says the shortage of women is only part of the problem of larger recruitment and retention issues in the Navy.

"The Navy in particular is suffering crippling shortages especially in the technical trades," he says. "They couldn't sail the whole fleet if they had to -- it would be impossible. They really need to deal with this to be capable of responding to an emergency."

One of the ways the Navy is trying to encourage positive public outreach is through the Canadian Leaders at Sea, or CLaS, program.

The initiative has been running along the Pacific, Atlantic and Arctic coasts of Canada since 2016 in hopes of positively exposing influential members of the public to naval life.

Clair Kennedy is a lawyer based out of Toronto and is the civilian co-leader of the most recent RCN Women's CLaS program that took 20 female civilians on an overnight sail on HMCS St. John's.

She says if more Canadians were exposed to the Navy, she thinks the attitude surrounding it would change for the better.

"It's really great to see how proud they are of what they do and how willing they are to share their knowledge and experience with us who really have no idea," she says. "They are very patient and enthusiastic and you can tell the degree of comradery on a ship like this, you can feel it."

Canada has become a world leader in terms of the number of females in its military and the areas in which they can serve.

The Royal Canadian Navy is taking significant strides to be fair and equitable for men and women, but the tide has yet to turn.

Navy hosts overnight sail with female leaders for International Women's Day (31 photos)
Mar 8, 2019 8:04 PM
Comments
We welcome your feedback and encourage you to share your thoughts. We ask that you be respectful of others and their points of view, refrain from personal attacks and stay on topic. To learn about our commenting policies and how we moderate, please read our Community Guidelines.