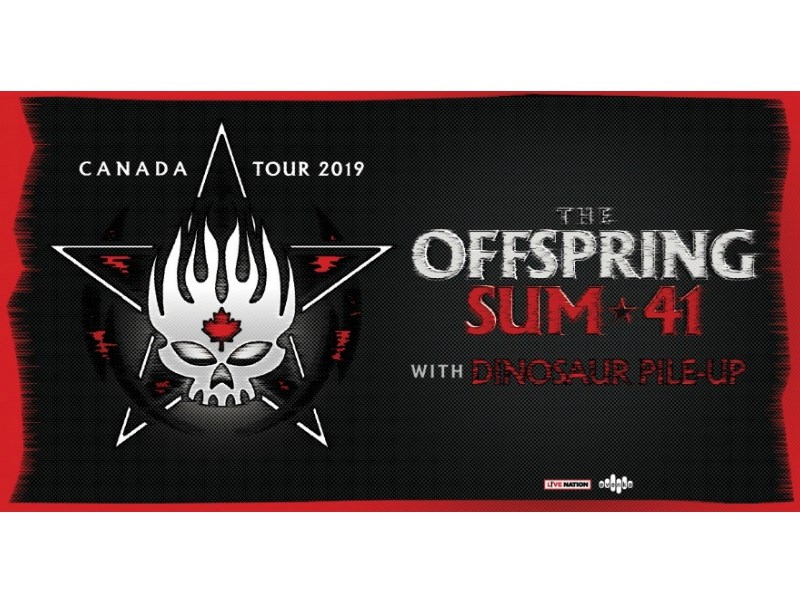 The original pranksters of the 1990s punk rock wave are headed to Halifax.

The Offspring – joined by Sum 41 – will jolt the Scotiabank Centre along with openers Dinosaur Pile-Up on Nov. 12.

“Last time was great. It was so muddy and wet, and it was a blast. It was a really fun show. I don’t think it’ll be muddy this time,” said Noodles.

The Offspring hit the punk rock lexicon in the late 1980s, but their album Smash brought them into the mainstream with singles Self-Esteem and Come Out and Play.

With an appearance at Woodstock 1999, their fifth album Americana holding court on the Billboard charts, and singles Pretty Fly For A White Guy, The Kids Aren’t Alright and Why Don’t You Get A Job? popularized, they reached their height soon after.

Still currently active, Noodles says the '90s were a fantastic time to be in the punk scene.

“Lots of people talk about us as being part of a revival, but really we were just part of injecting punk into the mainstream. It was always in the underground,” he said.

When 1970’s artists Sex Pistols and Dead Kennedys stopped, artists like Blink-182 and The Offspring would forge to the front. But Noodles counts one band from his era as a huge influence.

“Nirvana really broke doors down. Everyone called them ‘grunge’, but they had that punk rock attitude. It was so cool for us to be a part of all that, and to see guys like Rancid, Pennywise and NOFX capitalize too.”

Their touring partners, Sum 41, were climbing the charts as The Offspring were hitting a peak. The band released their second album, the monster hit All Killer No Filler, in 2001, to huge success.

They enjoyed success through to 2009, with hits like Fat Lip, Motivation, In Too Deep, Still Waiting, Pieces and Underclass Hero taking over radio waves. They would then take a break before their return in 2011 with Screaming Bloody Murder, and have recently released Order In Decline.

Noodles says Sum 41 guitarist Tom Thacker filled in for The Offspring when bass guitarist Todd Morse had a baby, and Jason “Cone” McCaslin always comes to see their shows in Toronto.

“They’re super cool guys, and they’re fun to hang out with. Doing shows with them is daunting, and it keeps us on our toes. They put on a hell of a show,” said Noodles. “We have to follow them on that stage, and this is exciting. Last time we played with them was in the late 1990s, when they were still traveling in a van.”

Sum 41 and The Offspring found their music becoming a part of the pop culture lexicon. The latter saw their music used in popular films like I Know What You Did Last Summer, American Pie 2, Loser, and even video game Crazy Taxi.

“We were even in (1998 horror-comedy) Idle Hands. We were playing in it, and (lead singer) Derek was hand scalped!” he said. “But the big moment was when Weird Al Yankovich parodied Pretty Fly. My daughter told me we were a big deal. We met him and hung out with him.”

The Offspring – over more than two decades – have put out nine albums, been nominated for a Juno, and won Best Rock Artist at the MTV Europe Music Awards and Billboard Music Awards.

“The evolution was really slow. We’ve moved back to playing music we fell in love with and finding a way to keep it fresh. Punk rock was there when we were young, trying to figure out where to go and what to do … We also always wanted songs you could play along to, and ones you’d get stuck in your head.”

With a new album on the horizon, Noodles says it’s finished and hopes it will be out soon.

“The artwork needs to be done and we have a rough track listing. We’ve even gone and done more music since. We just need a distribution deal, and we want that done by the end of the year. Then we can release early next year.”

See The Offspring, Sum 41 and Dinosaur Pile-Up on Nov. 12, 2019 at the Scotiabank Centre. For more information, visit here.