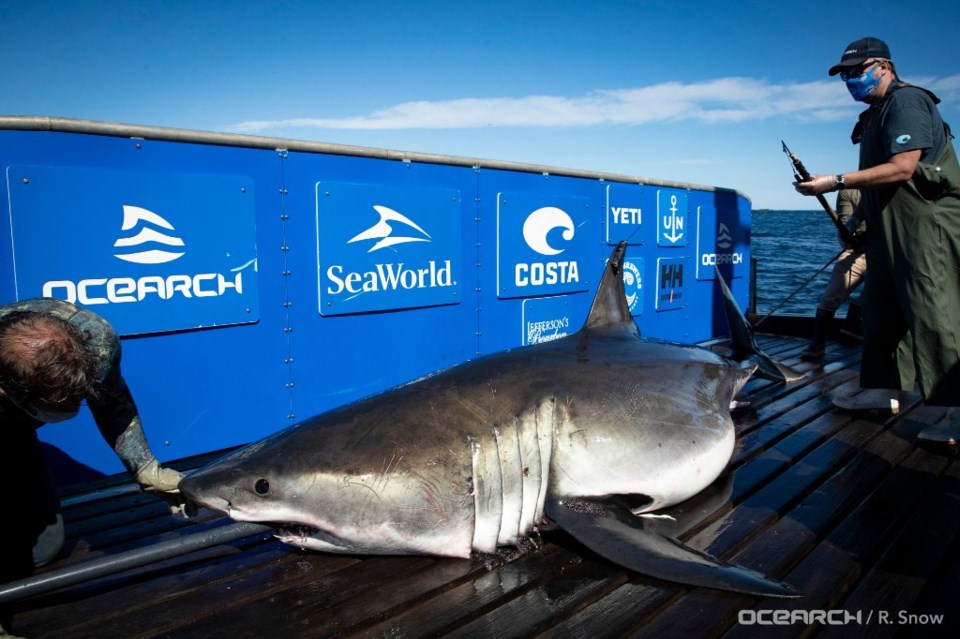 OCEARCH's third expedition in Nova Scotia is already a success.

Like last year, the research team has started their trip up in Cape Breton near Scatarie Island.

Saturday was their first day of fishing and it only took the crew a few hours to reel in a big catch; a 13'3" long mature male they've named Breton.

Breton is the 18th great white tagged by OCEARCH in Canadian waters.

In a news release, the group says it hopes increasing the sample size will help to understand what the sharks are doing in our area.

"Our expeditions in 2018 and 2019 really helped expose Nova Scotia as a white shark hotspot in the Northwest Atlantic," said expedition leader Chris Fischer.

"Now that we know they are here in big numbers, it's time to drill down and understand exactly how these animals are utilizing the area and how healthy the population is. We plan to gather the data needed to answer those questions on this expedition."

Several samples, including tissue, blood and other fluids, are taken from each shark brought on board the group's vessel to support 21 research projects conducted by 35 scientists from 24 organizations.

Those projects will study the biology, physiology, health and behavior of the white shark population and even examine bacteria in shark's mouths to try and help bite victims.

And by tagging and tracking their movements, the team hopes to identify areas that need protection.

"We're so excited to share these advanced findings with Canadian communities and help them learn about their own oceans," said OCEARCH chief scientist Dr. Bob Hueter.

"What's really exciting is that through the OCEARCH Tracker and through the advanced studies we will be sharing, we'll all be learning about the sharks together."

Before wrapping up its Nova Scotia expedition on Oct. 6, the group plans to spend some time tagging along the South Shore near Moshers Island -- where it's had a lot of success in the past -- "but the team will also be looking for new locations to find reliable access to the sharks."

On Monday, the crew is trying out one of those new locations. They've moved a little north of Scatarie Island to the Flint Island area, near Donkin.

The group says it has worked closely with Canadian customs officials to make sure all COVID-19 rules and regulations are being followed. This means, unlike previous years, OCEARCH won't be able to host any community outreach events or bring visitors aboard its vessel.