Founder Chris Fischer will be in Halifax this week, hosting a public meeting on the mission Wednesday at the Natural History Museum
Apr 22, 2019 2:14 PM By: Meghan Groff 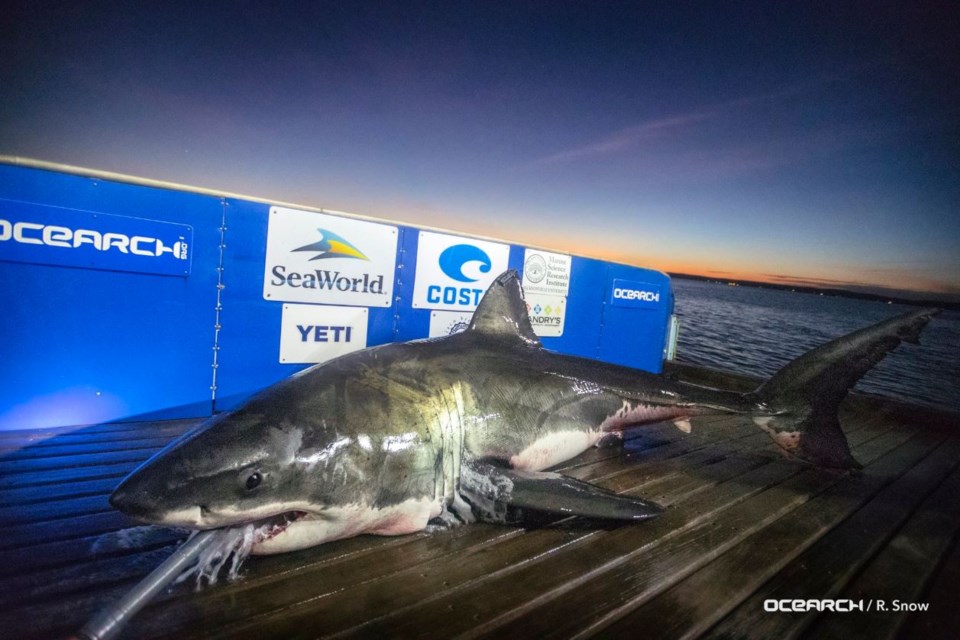 Founder Chris Fischer will be in Halifax this week, hosting a public meeting on the mission Wednesday at the Natural History Museum.

"The sharks continue to create more data for us to leverage and show us new areas to find sharks," he explained in a phone interview Monday. "We'll continue to build on what we started last fall and hopefully build the sample size for the scientists so they have good, defensible science."

"It's so powerful when you have a group of scientists with a bunch of different disciplines building one piece of the puzzle at a time. It allows you to actually conquer something as complex as the life history puzzle of the Northwest Atlantic white shark."

The 2018 trip also conducted 15 different research studies on each of the seven sharks brought aboard their ship, MV OCEARCH, one of which was too small to tag.

Fischer said he doesn't know what to expect this year when the team returns.

"You don't really want to hope for too much when you're coming in and doing research because the data will be what the data is," he explained. "Whether we catch more mature white sharks or more sub-adult white sharks, we'll just have to see."

"That will lead us to questions to try and understand, is this a mature white shark mating area? Is this an area where sub-adults white sharks spend the fall and early winter? It's about sample size now and seeing where that data leads us."

That summer and early fall, Hilton spent most of his time along Nova Scotia's south shore in the Lunenburg area.

This led researchers to believe the sharks could be breeding in our waters.

When the weather warmed up again in 2018, Hilton returned to the same spot, however by the time OCEARCH arrived in Nova Scotia last September, the great white had made his way to Cape Breton.

"We're hoping to come up to Halifax this coming September and do some work off the Cape Breton area, as well as down off of the West Ironbound area near Lunenburg," Fischer said.

Hilton also spent some time last October just south of Newfoundland before the waters cooled and he headed south for the winter. The shark was last detected on March 11 off South Carolina's coast, not far from where he was tagged just over two years ago.

Cabot, Jefferson and Jane, all tagged during last year's Nova Scotian expedition, also appear to be hanging out off the coast of the Carolinas, all pinging there within the last month.

Hal was last detected on March 27 a little further south near Georgia.

Nova last pinged in early March near Key West, but Luna has been a little shy lately. The second-biggest white shark tagged by the crew in the North Atlantic hasn't surfaced her fin long enough to be detected since February, when she was somewhere between Bermuda and the Turks and Caicos.

Although it's fun to go on the OCEARCH website and track favourite great whites, Fischer said the group's main goal is to ensure a healthy shark population, which is vital for the preservation of ocean life.

"It's hugely important you have white sharks in an abundant number up there, because it will prevent the seals from becoming kind of a runaway freight train that wipes out your lobster, your cod and Atlantic salmon," he explained.

"If we lose the top of our food chain, the white sharks, there's not going to be any lobster rolls and fish sandwiches for our kids. That's why we do what we do, the path to abundance goes through the white shark."

Wednesday's "A Conversation with Chris Fischer" starts at 7 p.m. at the Museum of Natural History. Tickets for the event are free and those interested in going can register online.

How Hilton's Nova Sc-ocean visit could help protect great white sharks
Aug 19, 2018 6:18 AM
Comments
We welcome your feedback and encourage you to share your thoughts. We ask that you be respectful of others and their points of view, refrain from personal attacks and stay on topic. To learn about our commenting policies and how we moderate, please read our Community Guidelines.