NS Board delays hearing on unescorted passes for man who killed mom, grandparents

A hearing for Codey Hennigar was abruptly adjourned Tuesday at the request of the crown
Feb 7, 2018 6:32 AM By: Andrew Pinsent 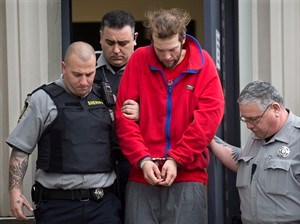 HALIFAX - The family of a man found not criminally responsible for killing three family members in rural Halifax in 2015 will have to wait to learn if he'll get extended freedoms.

Codey Hennigar killed his mother, Ann Ward, and his grandparents, Bill and Ida Ward, in January of 2015. He was later charged with three counts of first-degree murder but was found not criminally responsible due to his schizophrenia.

Hennigar has requested temporary escorted day passes from the East Coast Forensic Hospital in Dartmouth and was scheduled to have his request heard before Nova Scotia's Criminal Code Review Board on Tuesday.

Usually such hearings are held in the hospital but officials say it was moved because of the amount of public attention on the case, leaving the family to take part via video link in a building several kilometres away.

The decision disappointed Hennigar's brother, Chandler Hennigar, who told Global his family should have had the option to take part in person.

"I don't think it was fair that they put us through video link when it states that we have the right to be there and it's supposed to be a public hearing," he said.

"I just want things to change so that we don't have to keep going through this. It seems like we're being more victimized than we have to..."

Most members of Hennigar's family, including Chandler, disagree with the idea of him receiving more freedom.

The hospital says the hearing will move ahead once a larger space with increased security can be decided upon.