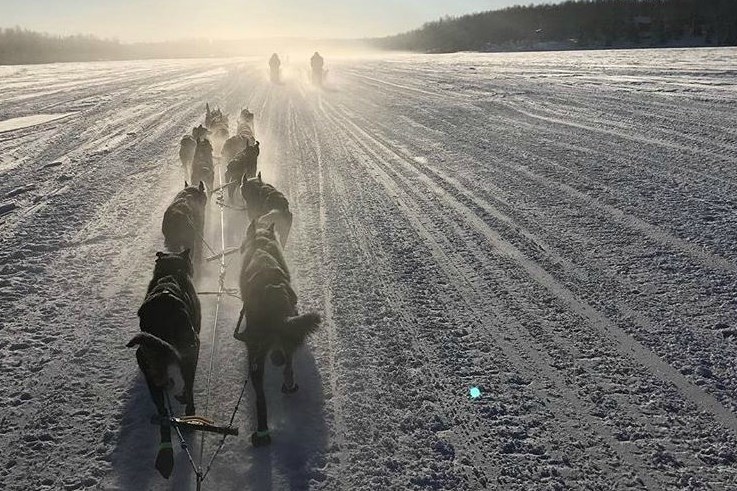 When Brad Farquhar was 8 years old growing up just outside Brooklyn, Nova Scotia, he watched the movie Iron Will.

The Disney film is about a boy who enters a dog sled race to save his family's farm.

Farquhar told NEWS 95.7's The Sheldon MacLeod Show, for years, something about that movie stuck with him.

"In 2015, I decided it's time to pursue my dog sledding passion, or what I thought would be a passion," he said.

"From a phone call, to a trip up to Alaska, it's been three years now and I've managed to get through all my qualifying races, and I'm sitting on the door step of the Iditarod."

"Through that journey you're going to encounter mountains, frozen lakes, open water, and temperatures that can get down to minus 50," he said.

In order to qualify, Farquhar had to finish in the top 75 percentile in three qualifying races.

He has leased his team of dogs from musher Ken Anderson, who has competed in 12 previous Iditarod races, but isn't running this year.

Farquhar said the dogs do a lot of the work during the multi-day event, but he will be doing more than just hanging on and enjoying the ride.

"All the hills, you're not just standing on your sled, you're running up those. You have ski poles and you ski pole along side of the sled to help out with the dogs," Farquhar explained. "It's a team effort for sure, and the dogs come first no matter what."

He will be tending to the dogs during the race, making sure they're well fed. He'll also be dressing them in different coats, depending on the weather conditions, and putting booties on their paws to protect them from the cold and debris.

He said the dogs love to race as much as the people.

"If the dogs don't want to run, if they don't want to be here doing what they're doing, they'll stop. That will happen," he said. "Dogs will get tired of running, and if do, at all the checkpoints along the way you can leave them behind with a veterinarian and volunteers and they'll be returned to you at the finish."

Farquhar dreams of being named Rookie of the Year, but his main goal this year is to make it across the finish line.