The series, hosted by Saint Mary’s University’s Sobey School of Business, was established to help mark the 25th anniversary of the Black Business Initiative
Apr 19, 2021 6:37 PM By: Michael Lightstone 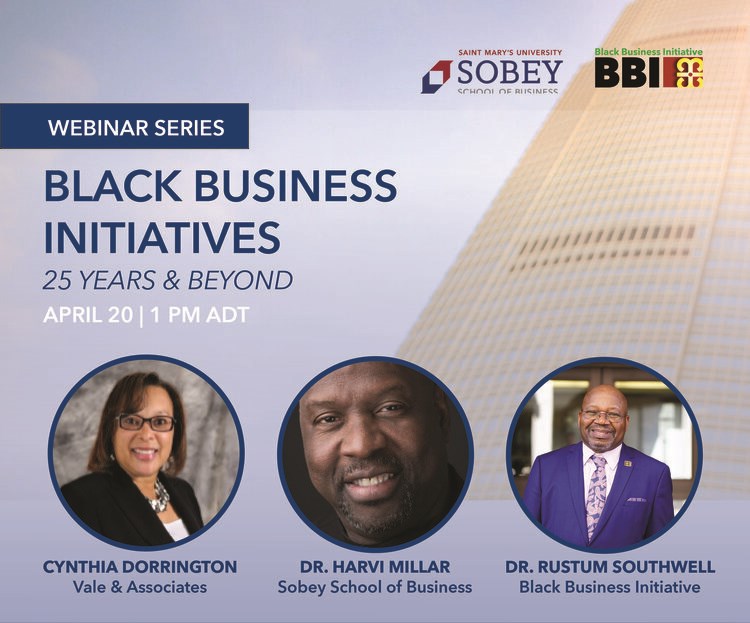 Lessons learned from Black business advocacy in Nova Scotia are the focus of a series of talks Saint Mary’s University is launching this week.

The inaugural event – a one-hour webinar hosted by the university’s Sobey School of Business – begins Tuesday at 1 p.m.

A recognition and celebration of more than two decades of Black business development will form part of the series’ discussion, as will challenges and other issues business operators can face when starting and growing an enterprise.

The series was established to help mark the 25th anniversary of the Black Business Initiative, a provincewide advocacy organization formed in 1996 with funding from the Nova Scotia and federal governments.

Webinar participant Harvi Millar, professor of operations management at Saint Mary’s, said his comments Tuesday will shine a light on findings from a survey he did of the impact the coronavirus pandemic has had on African-Nova Scotian businesses.

He said representatives from 59 small businesses answered questions about their operations’ performance under COVID-19.

Millar said results from his study showed 71 per cent of the businesses employed less than five people.

Many business operators have been struggling during the public-health crisis, he said. (The provincial government declared a state of emergency in March 2020.)

“Professional services seemed to fare a lot better, in terms of the impact of the pandemic on them” compared to those suffering in other sectors, Millar said Monday.

“Prior to COVID-19, of the businesses who participated (in the survey), about 34 per cent of them said that they were . . . operating at a healthy level,” he told HalifaxToday.ca in a phone interview. “Healthy, meaning that they’re making a profit.”

After managing commerce beneath the cloud of the coronavirus, said Millar, “we’re down to like nine per cent of those businesses saying that they actually are healthy.”

Millar has been teaching at Saint Mary’s since 1988. He said Black business advocacy in Nova Scotia can be traced back prior to 1996, and the province has a long history of Black entrepreneurship.

“We have folks who’ve had to . . . be self-employed, selling their services, because (they) had difficulty finding work,” Millar said. “They weren’t called entrepreneurs back then, but they were self-employed people.”

Promotional material from SMU says Millar will be joined at the online-only panel session by business veterans Rustum Southwell and Cynthia Dorrington. The moderator is Harjeet Bhabra.

Southwell is the chief executive officer of the Black Business Initiative.

Dorrington is president of Vale & Associates Human Resource Management and Consulting Inc. Bhabra is dean of the Sobey School of Business.

For more information on the webinar, and to register, go here.