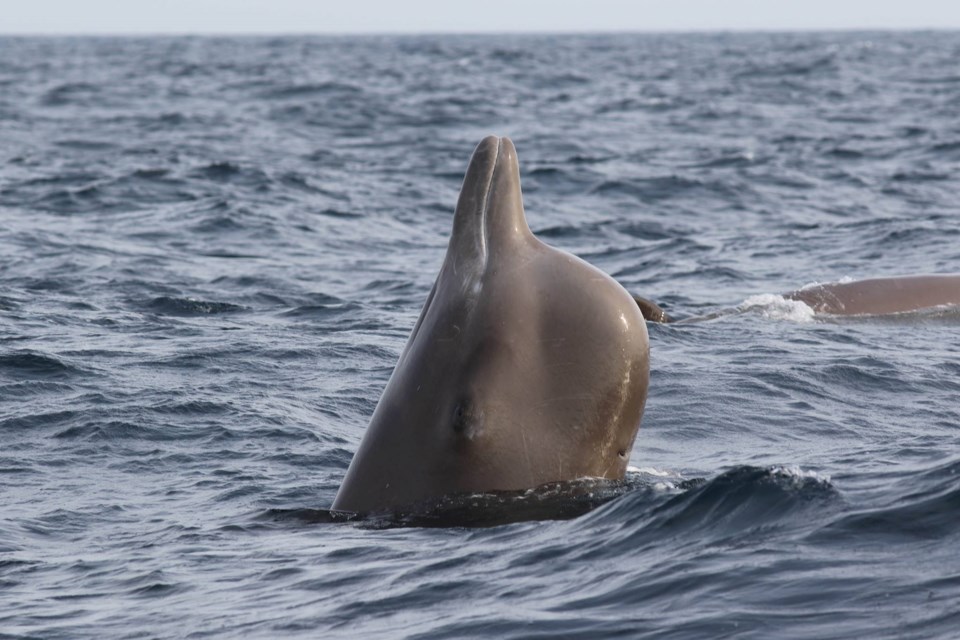 In the late 1800s, the whaling industry was still in its infancy. But limited technology and only basic navigation didn't stop whalers from across the Arctic from targeting Northern Bottlenose Whales.

"Between the early 1900s and the 1950s was the prime time for hunting these animals. But we were taking Bottlenose Whales off Nova Scotia up until the 60s," says Laura Feyrer, a PhD candidate in marine biology at Dalhousie University.

By the height of the whaling industry, between 60,000 and 100,000 of the species had been caught by fishermen from Canada, Norway and Iceland.

"We believe from our research over the last 30 years that there's between 100 and 200 animals left in the Nova Scotia population," explains Feyrer.

The PhD candidate's research is adding to a project at Dalhousie University that has been researching Northern Bottlenose Whales since 1988, and why they call Nova Scotia their home.

Although most other Northern Bottlenoses tend to stay inside the Arctic circle, in Norway and Greenland, Feyrer says that a gully off the coast of the province could be key to explaining why they like Nova Scotian waters.

"It's the largest submarine canyon in the Northwest Atlantic," she tells NEWS 95.7's The Todd Veinotte Show.

The Gully Marine Protected Area is about 200 kilometres off the coast of Nova Scotia, and has been protected from fishing activity since May 2004. For the last 20 years, the whale population in the area has been pretty stable.

"They like to eat deep-water squid, and the gully is very deep and it has a lot of currents that probably attract a lot of prey. There's a huge diversity of species in the gully when you're out there, so it's probably a pretty sweet spot to stick around," says Feyrer.

But despite having lots of food and room to roam, Feyrer says it's still taking a long time for the population to bounce back. There could be several reasons the population remains low, including limited genetic diversity and because of the long lifespan of the whales, which means they reproduce less.

"Genetic diversity is like an insurance policy, it gives you resources if things change," explains Feyrer. "But it's also related to things like inbreeding, which can limit your ability to recover from having your population reduced."

Part of Feyrer's PhD research at Dalhousie involves studying the DNA of the whales via samples taken on the water. Feyrer says the whales are curious and often come right up to the boat. Because the whales are social animals and hang out in groups of three or four, it's easy to see a few at once.

"They like to stick their faces out of the water quite a bit, blow bubbles beside the boat, that kind of thing. They're very social and curious," she says.

Through DNA, researchers are hoping to learn why the Bottlenose Whales in Nova Scotia are so far South, and how they differ from the rest of the species.

"That's why we're using genetics to try and decode what's going on there. What is it about these whales in Nova Scotia? Are they specializing in something here that has made them different genetically?" she asks.

The PhD candidate says it's a "dream come true" to be working with the animals, but will soon be wrapping up her research. In the next few months, Feyrer plans to share the research with the public.

"It's really hard to have good data on whales, long-term research data. So, to be able to contribute in that way, I feel really lucky," she says.

Feyrer says eventually, she hopes to be able to see the Nova Scotian Bottlenose Whales connect with their relatives further North, and to begin to reproduce with a wider genetic range.

"We need to continue to monitor this population and make sure that they're continuing to do okay, and that hopefully their genetic diversity is getting restored," she adds.