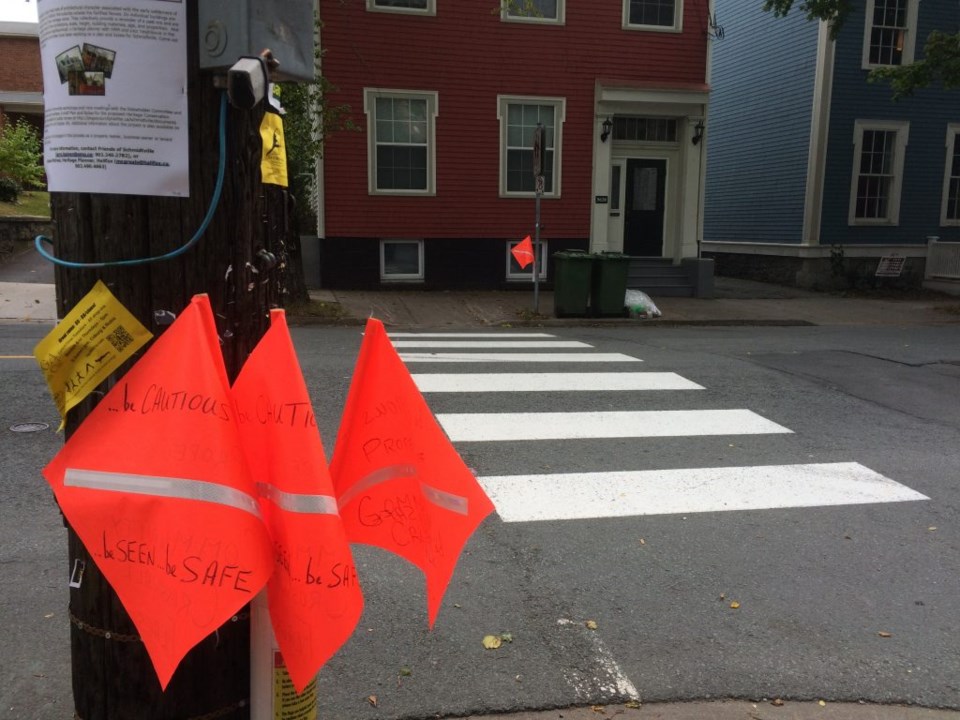 Crosswalk flags at a crosswalk in Halifax (Meghan Groff/HalifaxToday.ca)

Fatalities on Nova Scotia's roads increased by 50 per cent in 2018, with the number of pedestrian deaths almost doubling.

Of those 76 deaths, 12 involved pedestrians, twice as many as the previous two years combined, and the most since 13 pedestrians died in 2006.

Four of the 12 pedestrians deaths happened in Halifax Regional Municipality. For Norm Collins with the Crosswalk Safety Society of Nova Scotia, something needs to change.

"It's no question that the more fatalities that are occurring on our roads for whatever reason is tragic and obviously we should be implementing things that will reduce rather than see an increase in that number," he said in an interview with NEWS 95.7's Rick Howe.

Collins says road safety is the responsibility of pedestrians and drivers, both who have rights to use the roads, and that more education is necessary to get everybody on the same page.

"I think a lot of drivers don't know what unmarked crosswalks are and when they're required to yield. I think that there are a lot of pedestrians who inappropriately think that they should have more rights than they do," he said.

Collins says more needs to be done to reduce these fatalities, but with upcoming budget proposals cutting back drastically, he's not hopeful right now.

A proposed draft of the capital budget in HRM for 2019/20 has slashed road safety budgets across the board, he says.

In particular Collins is worried about the future of the road safety improvement program's budget, which implements pedestrian ramps, marked crosswalks, traffic calming and more.

"If pedestrians are really a priority in HRM, then we must provide more opportunity for pedestrians to be able to legally enter a crosswalk and safely cross," he said.

He would like to see the city increase this budget, and as well as do a review of crosswalk effectiveness in HRM. Collins points out that many timed crosswalks do not give pedestrians enough time to cross the road safely.

He also notes that signs indicating a crosswalk aren't noticeable enough, especially during the winter.

The other deaths this year include 52 vehicle occupants, nine motorcyclists, two off-road vehicles, and one cyclist.